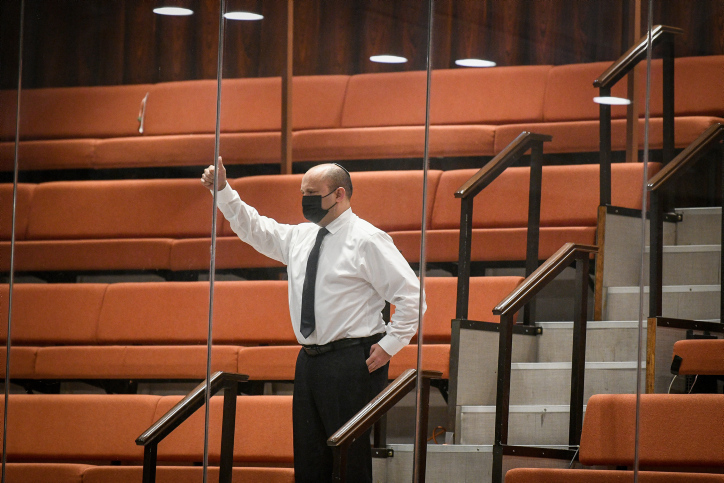 Prime Minister Naftali Bennett will come to the Knesset Monday evening, despite officially being in quarantine. He will attend a Knesset session from a special isolation booth in the viewing gallery.

His appearance at the Knesset is meant to mollify opposition members, who had threatened to filibuster all Knesset work unless he showed up for a discussion under rules requiring his presence if 40 MKs sign a petition demanding it.

Earlier in the day, Bennett’s spokeswoman said there was a good chance that the Prime Minister’s daughter, who tested positive for the coronavirus, has the Omicron variant. The spokesman said Bennett did not want to come to the Knesset and risk infecting anyone but the Likud forced him to come.

“The opposition playing with the health of the public is very problematic,” Bennett said. “While we are doing everything possible to encourage the feeling of responsibility of every Israeli citizen amid the rise in infections, Netanyahu is playing with the pandemic to score petty political points. Netanyahu has lost the last vestiges of national responsibility.”

The Likud said in response: “Bennett is scared. Contrary to Knesset regulations and in an unprecedented way, Bennett tried to escape accountability to the public. In this, too, he failed. At the height of the coronavirus crisis, we did not close the Knesset or run away from debates like Bennett attempted to.

“According to the guidelines of the Health Ministry and according to the rules of the Knesset, Bennett must appear for the discussion and participate in the isolation stand. That’s why Bennett’s spin is nonsense – he does not care about public health but about his political health, and it is indeed in danger.”

Likud faction chairman Yariv Levin wrote to Knesset Speaker Mickey Levy, insisting that Bennett come to the Knesset for a parliamentary maneuver that compels the Prime Minister to listen to speeches by opposition MKs and then address the Knesset.

Levy initially canceled the special session of the Knesset. But after Bennett agreed to come from his home in Ra’anana, Levy announced that the start of the session would be delayed from 4 p.m. to 6 p.m.

It’s not clear what the debate will be on. Such debates normally take an hour, during which an opposition and the Prime Minister normally present differing views on a subject, followed by a short discussion and a vote.