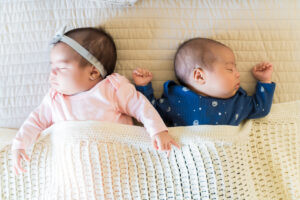 Liam and Emma were the most popular baby names in New York City in 2020, the fifth-consecutive year that Liam has led the way for boys and fourth straight year for Emma as top girl.  There were 682 Liams and 442 Emmas born in the Big Apple last year, according to the Health Department, which releases baby-name statistics for each year at the end of December the following year.

Noah was the second-most popular boys’ name for the third-consecutive year, followed by Jacob, Ethan, Lucas, Joseph, David, Aiden, Alexander and Daniel. Eight of the 2020 top ten boys’ names were also among the top 10 last year: Alexander and Joseph replaced Michael and Matthew.

On the girls’ side, Sophia was number two, followed by Mia, Olivia, Isabella, Ava, Leah, Sarah, Chloe and Amelia. Nine of the top ten from 2020 remained, with Sarah replacing Charlotte. (In 2019, the girls’ top 10 list was identical to 2018 but for Charlotte replacing Sarah.)