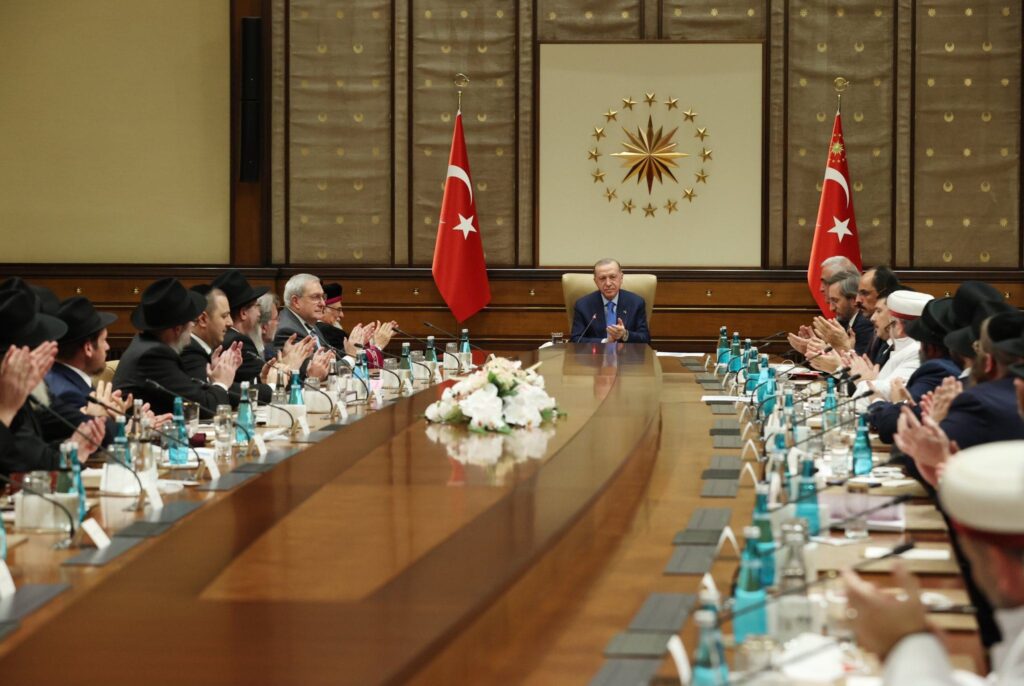 Turkish President Recep Tayyip Erdogan said relations with Israel were “vital to the security and stability of the region” and spoke optimistically about the potential for improving relations with the Jewish state during a meeting with a delegation of Jewish leaders Wednesday.

Erdogan made the remarks in a meeting with Turkish Rabbis as well as members of the Alliance of Rabbis in Islamic States, and Chief Rabbi of Russia Berel Lazar, during which he was gifted a silver menorah.

Israel’s Chief Sephardic Rabbi Harav Yitzchak Yosef had also been set to attend but was forced to cancel when Israel added Turkey to its no-fly list over coronavirus concerns.

According to Turkish newspaper Hurriyet, Erdogan spoke out against “inhuman ideas such as racism, antisemitism and intolerance toward people of different religions,” while calling antisemitism and hostility to Islam a “crime against humanity.”

He said that despite differences with Israel on its policy toward the Palestinians, “our relations with Israel in the areas of economy, trade, and tourism are progressing in their own way.”

The Turkish leader praised recent dialogue with President Yitzchak Herzog and Prime Minister Naftali Bennett while saying a sincere Israeli effort to advance peace with the Palestinians “will undoubtedly contribute to the normalization process” between Ankara and Yerushalayim.

“Turkey-Israel relations are vital for the security and stability of the region. We are ready to improve our relations,” Erdogan said.

Rabbis who attended the meeting said Erdogan told them he would work to bolster Holocaust education in Turkey.

He also promised to authorize the construction of a synagogue in Northern Cyprus, a Turkish- occupied territory whose government is recognized only by Ankara, he said he hoped would be dedicated within a year.

According to Rabbi Mendy Chitrik, who heads the Alliance of Rabbis in Islamic States and serves as the leader of the Ashkenazic Jewish community in Turkey, “The Rabbis left the meeting with a very good feeling and were happy to hear from President Erdogan that would act to bolster Judaism in Islamic states.”

The Turkish president recently adopted a more positive tone toward Israel, saying on several occasions that, following years of acrimony, he would like to improve bilateral ties.

Earlier this month, he said he was open to improved relations, but that the country must first display “more sensitive” policies toward the Palestinians.