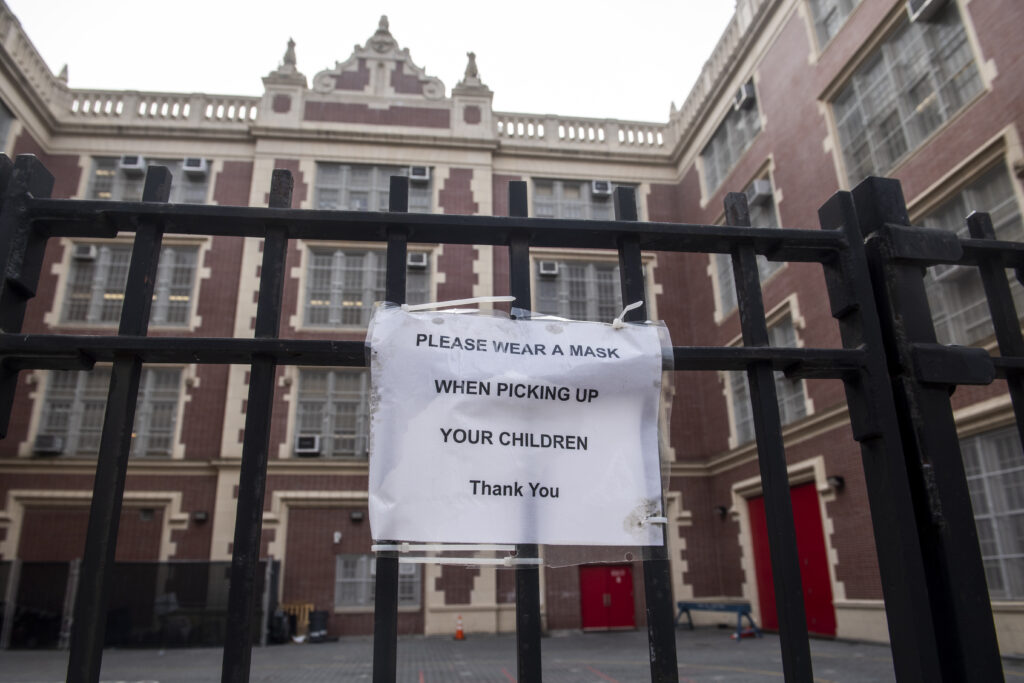 Kathryn Malara, a Brooklyn teacher, lingered on a street Tuesday, filled with dread about going to her job.

“I’m sitting in my car terrified to walk into school,” she wrote on social media just before taking a deep breath and heading to her classroom. “Cases exploding. People I really care about are sick & frightened.”

The quick spread of the omicron variant of the coronavirus has stirred another angst-ridden reckoning about whether in-person schooling is worth the risk. Malara and other teachers worry about endangering their health by entering crowded schools. Frustrated parents wonder how to keep their children safe and whether campuses could become superspreader sites.

“It’s creeping back up again, and I don’t like this. I’m worried. Lives are at stake here — not just my son’s life,” said Starita Ansari, a public school parent in Manhattan who is keeping her 10th grader home after being rattled by the latest COVID-19 infections at his school.

Scientists say omicron spreads more easily than other coronavirus strains, including delta, though many details about it remain unknown, including whether it causes more or less severe illness. But even if it is milder, the new variant could still upend schooling and overwhelm health systems because of the sheer number of infections.

The federal Centers for Disease Control and Prevention said schools can remain safe when proper protocols are followed, including observing safe distancing, wearing masks and getting vaccinated.

“Detection of cases in schools does not necessarily mean that transmission occurred in schools,” the CDC said.

On Monday, a fifth of New York City’s public school students skipped in-person classes, an indication of the anxiety spawned by the resurgence of COVID-19 cases in New York state, which in recent days has broken infection records.

“Parents are voting with their feet, and many of them don’t feel that the current protocols are actually keeping their families safe. And a lot them don’t think they’re being given enough information about what’s happening to allow them to make choices for their families,” said Jennifer Jennings, a Princeton University researcher focused partly focused on the intersection of education and health care policy.

Most schools across the country are keeping classrooms open, despite the new threat from omicron, but some school districts have moved to limit in-person instruction as a precaution.

“There is great concern because we had been doing so well,” said Daniel A. Domenech, executive director of the American Association of School Administrators.

“Just about a month ago, we had about 98 percent of the students in this country attending school in person, and omicron has brought about just a huge reversal in that process. And all of a sudden we’re seeing infection rates skyrocket,” he said, “It’s affecting children much more than previous variants, so children are getting sick. Staff is getting sick, and it’s just a spread that’s alarming.”

As of Thursday, nearly 7.4 million children in the United States have been infected since the start of the pandemic, representing 17.3% of all cases, according to data gathered by the American Academy of Pediatrics and the Children’s Hospital Association.

Of those cases, almost 170,000 cases were reported over the last seven days of the tally.
The CDC has said that the extent to which children suffer long-term consequences of COVID-19 is still unknown.

New York Gov. Kathy Hochul has vowed to keep schools open. She said the state would provide 2 million test kits to schools, which would then distribute the tests to children to take home.

“We believe that it’s critically important that our children not end up in that same situation they were for so many months, when they were so displaced from their normal environment,” Hochul said Monday.