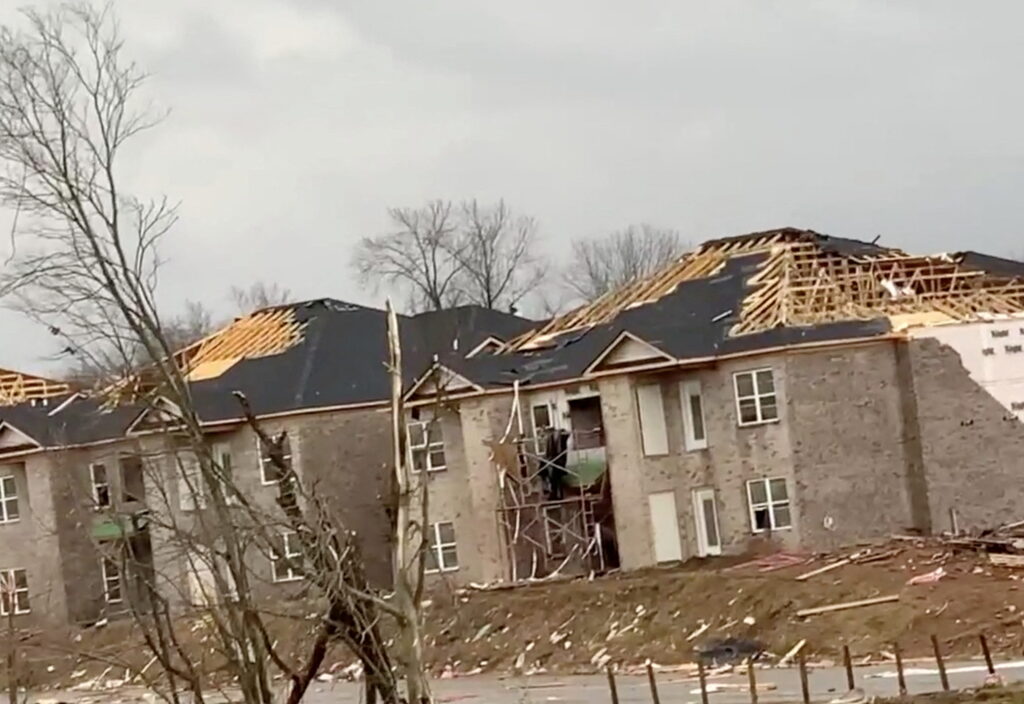 Devastation from tornadoes that slammed parts of the United States this month will push the insurance industry’s 2021 bill for weather-related claims well above the predicted $105 billion, industry experts said, and premiums should rise on worries that climate change will drive more severe weather.

Tornadoes tore a 200-mile path through six states in the Midwest and South, demolishing homes and leveling businesses, causing $5 billion in insured losses, according to preliminary estimates.

Climate change has been driving more so-called “secondary peril” weather events that are smaller than hurricanes, for instance, but less predictable. Other secondary perils include small to mid-size localized events like wildfires, winter storms and hail storms.

“We’ve got a year of over $100 billion of catastrophe events without having a big named event, whether that’s an earthquake or a hurricane,” Barnaby Rugge-Price, Chairman of Howden Broking Group, told Reuters.

“Clearly underlying that, something else is going on, of which the most obvious thing is climate change,” he said.

On average, there are 1,500 tornadoes per year in the United States, with only 25 occurring in December, according to reinsurance broker Guy Carpenter. This month’s cluster of tornadoes was exceptionally rare in terms of the season, the intensity and the length of the storm paths, the company said.

Unlike primary perils like hurricanes, which have the highest potential for losses and are therefore closely monitored and modeled, secondary perils are unpredictable. They are harder to model due to insufficient data, Rugge-Price said, making it in turn more difficult for the industry to assess the risks.

Some experts said it is not easy to draw a clear connection between climate change and the rising severity of tornadoes. KCC said tornadoes form in specific atmospheric conditions and it could be “challenging to attribute specific trends in severe weather to climate change.”

Still, this year has seen a rise in the severity of such secondary perils.

Before the tornadoes hit, the global insurance industry was facing an estimated $105 billion in losses this year, the fourth-highest on record, without a single giant weather catastrophe, according to reinsurance giant Swiss Re.

While Hurricane Ida was the single costliest natural disaster in 2021, more than half the losses were related to secondary peril events including winter storm Uri that brought freezing temperatures to Texas.

At least one severe annual secondary peril event is the new “norm,” each resulting in more than $10 billion in losses, Swiss Re said.

“Natural catastrophe losses are likely to continue growing given increases in wealth, urbanization and the effects of climate change,” the company said.

Insurance premiums are likely to continue rising, brokers said, and property owners seeking insurance also must shoulder higher retentions, initial costs they must bear themselves before insurance kicks in. “We don’t expect to see a reduction in capacity available for tornado coverage,” said Dave Reasons, Marsh’s U.S. Central Zone Property Leader. However, he said, some clients were willing to bear retentions tenfold higher than in the past to keep premiums low.

“We certainly may see discussions about the right retentions, the right pricing for that.”