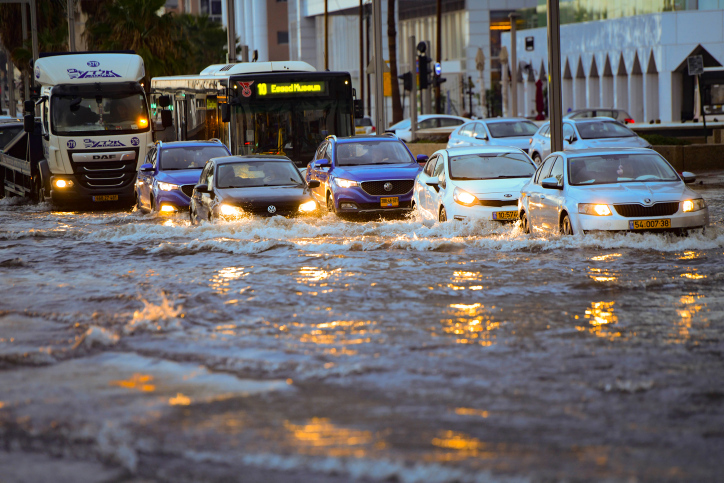 Israel’s first major storm of the winter blew through a second day on Tuesday, with strong winds, intermittent downpours and flooding in various parts of the country.

Emergency services were on high alert since Monday, though fortunately there were relatively few life-threatening situations, and none of the widespread power failures that have occurred in previous years.

A 25-year-old man was evacuated to the hospital after his car fell into a sinkhole on a road in Netanya amid heavy rains and winds. He was treated for light injuries.

A car flipped over on Route 5 near Petah Tikva, injuring a man in his 60s.

After a school flooded in the northern coastal city of Pardes Hana, the students emerged to safety by forming a “bridge” of tables placed next to teach other so they could walk across them over the water.

In Tel Aviv, the boardwalk was flooded. Roads were closed due to flooding in Holon, where several people who were trapped in their cars were rescued by fire services.

At least one death from a car crash and several injuries were blamed on the storm’s torrential rains and wind on Monday.

A man who was hit by a falling tree in Netanya Monday remained hospitalized in serious condition on Tuesday.

Wind speeds were clocked at 26 miles per hour in Yerushalayim, with gusts as high as 42 miles per hour, the Israel Meteorological Service said.

Approximately 10 inches of snow fell on Mount Hermon in the north, the Walla news site reported. The surface level of the Keneret rose by 2 centimeters (0.8 inches).

The IMS forecast calls for more rain and cold on Wednesday, and gradual clearing through the rest of the week.