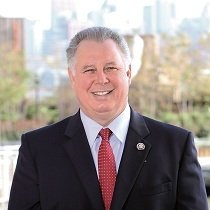 Veteran Rep. Albio Sires, D-N.J., plans to retire at the end of his eighth term, bringing the number of Democrats who have said they won’t seek reelection during next year’s midterms, in which the party risks losing control of the House, to 23.

“When he retires at the end of his term, our Caucus and the Congress will truly miss his tireless voice For The People,” House Speaker Nancy Pelosi, D-Calif., said in a statement Tuesday, in which she also praised Sires’s work on affordable housing and education, among other issues.

Sires, who plans an official announcement of his retirement early next year, told local media that he is backing Robert Menendez Jr., son of Sen. Robert Menendez, D-N.J., as his successor for his northern New Jersey district.

“I think Robert Menendez Jr. is a perfect fit for the seat,” Sires told the Jersey Journal on Monday. “He’s young, he’s intelligent, he’s very likable, and I think that his positions fit in well with Hudson County.”

Sires, 70, told the publication that he is retiring because of his age and his view that things are “not going to get any better in Washington.” He said he plans to fully retire rather than embark on another career such as lobbying.

Reps. Stephanie Murphy of Florida and Lucille Roybal-Allard of California also said Monday that they will not run for reelection, adding to the ranks of House Democrats who are heading toward the exits ahead of the 2022 election.

Republicans have grown increasingly optimistic that they will capture enough seats next year to regain control of the House, which they lost in the 2018 midterms. The 23 Democrats who have announced their plans to exit include those who are retiring as well as those seeking other elected offices.

Murphy, 43, is a three-term congresswoman and the first Vietnamese American woman to serve in Congress.

Roybal-Allard, 80, is a House Appropriations subcommittee chair and was the first Mexican American woman elected to Congress. She is the daughter of former congressman Edward R. Roybal, D-Calif., and, like her father, is retiring after three decades in the House.

Sires previously served as mayor of West New York, as a state assemblyman and as speaker of the assembly before being elected to Congress in 2006.

“On behalf of the House, I thank Congressman Sires for his committed leadership, and I wish him and his wife Adrienne all the best as they embark on their next adventure,” Pelosi said in her statement.