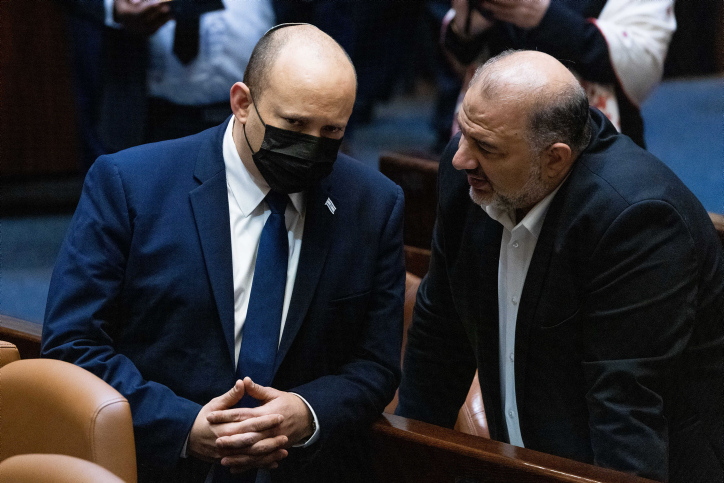 The head of the first major Arab party to enter a government coalition said Tuesday that changing the character of the state of Israel is not realistic, and that Arab Israelis should rather strive to improve life in their communities.

“Israel was born as a Jewish state. And that was the decision of the Jewish people, to establish a Jewish state. The question is not ‘what is the identity of the state?’ That’s how the state was born, and so it will remain,” Mansour Abbas, chairman of the Ra’am party, at a conference sponsored by Globes in Tel Aviv.

Abbas said that while he had protested the 2017 Nation-State law, which enshrines the state’s Jewish identity in law, he advised Arab Israelis “not to give ourselves illusions.”

“This is the reality. The question is not the about the state’s identity — but what the status of Arab citizens will be in it,” Abbas said.

Although Abbas’s view may be welcome to Jewish Israelis, it is not uncontroversial among many of his fellow Arabs. Critics contend that the Jewish identity of the state and the status of Arabs in it cannot be separated.

“The question of the status of the Palestinian minority in Israel is fundamentally tied to the definition of the state as a Jewish state,” said MK Sami Abou Shehadeh, who represents the Balad faction of the rival Joint List party, in response to Abbas on Tuesday.

“Only a state of all its citizens can bring about justice and full equality among all citizens,” Abou Shehadeh said

Abbas’s position represents a departure from the stance of the Arab parties in the past, which has been that Israel should be a state of all its citizens, not a Jewish state.

“Israel is a Jewish state. That is its identity, its essence. From their perspective, if its Jewish nature is taken away, the state will have vanished as well. Whether you accept it or not — that is a personal matter,” Abbas said during an interview with the Arabic-language publication Kul al-Arab in November.

“The essential question for us as Arabs is what our status is in this country. Period. Next page,” Abbas said.