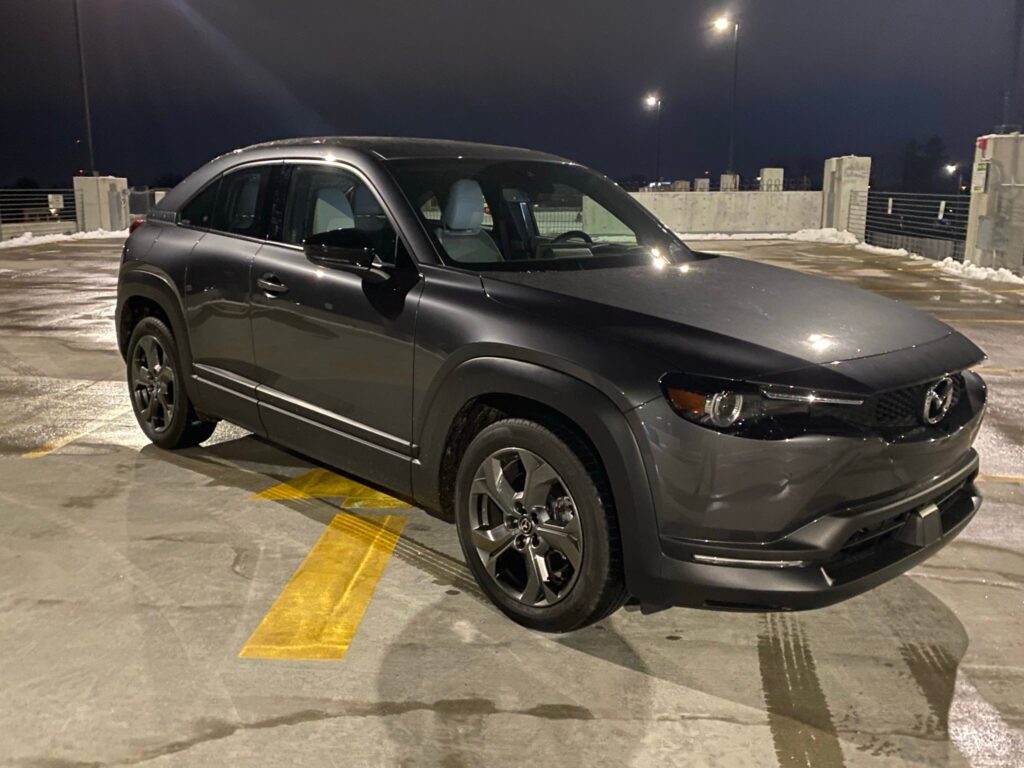 The automaker plans to sell just 560 in calendar 2022, exclusively in California.

That would make the MX-30 slightly more common than the California condor, of which the U.S. Fish & Wildlife Service estimates 504 exist.

The EV’s range of just 100 miles on fully charged batteries, however, makes the MX-30 a likelier candidate for extinction than the majestic carrion eaters. Condors enjoy federally protected status. All the MX-30 gets is a $7,500 federal tax credit, plus whatever your state may put on the table to encourage EV sales.

For field spotting purposes, the MX-30 is a subcompact SUV that competes with EVs like the Chevrolet Bolt EUV, Hyundai Kona, Kia Niro and Nissan Leaf. Like them, Mazda’s little hatchback has an SUV-style profile, but offers only front-wheel drive.

The MX-30 is Mazda’s first EV. A plug-in hybrid version that has a gasoline engine to enable longer drives is expected to go on sale sometime in 2022.

Prices do not include destination charge ($1,175)

The MX-30’s exterior styling is handsome and modern, but its 100-mile battery range is 10 years out of date, comparable to a 2011 Nissan Leaf’s 73 miles, when the little Nissan made news as one of the first affordable EVs.

EV technology has come a long way since then, though the MX-30’s specifications might not make you think so. Among contemporary EVs comparable to the MX-30, the 2022 Leaf’s made it 215 miles in EPA tests. The 2022 Kia Niro EV raises the ante to 239 miles; the Chevrolet Bolt EUV, 247; and the Hyundai Kona EV, 258.

Mazda rightly points out that most Americans drive considerably less than 100 miles a day, but longer trips occur too frequently to ignore, and U.S. charging capacity isn’t enough to count on finding a nearby 240v — or better yet, a DC fast charger — when you get to grandma’s house for Thanksgiving. A full charge at 240v takes 5.3 hours, according to the EPA. Mazda says a DC fast charger takes the MX-30 from 20% to 80% in 36 minutes. But public chargers — especially DC fast chargers — aren’t common enough yet, and even if they were, the MX-30’s range would still constitute a significant disadvantage.

Enough about the battery. Why beat a dead horse? Actually, dead horses are good eatin’ for California condors, which have no trouble riding thermals more than 100 miles at a time.

It has a low roofline, flared fenders and fastback rear styling. The appearance is consistent with Mazda’s other SUVs, but distinctive. A chrome strip above the rear-fender mounted charging port declares it to be a Mazda, while a decal on the neighboring window announces it’s electric.

The interior emphasizes sustainable materials with cork and fabric trim.

The front seat has plenty of room, but limited access to features, including difficult to reach USB and 12v ports and mobile phone tray. The rear seat has very little legroom. Rear-hinged back doors provide usable access to the back seat.

The MX-30 uses a multifunction rotary controller for audio, navigation, Apple CarPlay, Android Auto and other features. I found it cumbersome for common tasks like browsing audio tracks or stations and accessing smartphone functions.

A screen mounted on top of the dashboard shows navigation, audio, smartphone displays, etc., but has no touch capability. Neither wireless charging nor wireless CarPlay/Android Auto is available. Flat panel climate controls also require more of the driver’s attention than dials and buttons.

Acceleration is adequate. The MX-30’s 3,655-pound curb weight, 143 horsepower and 200 pound-feet of torque pencil out to a poorer weight-to-power ratio than its competitors. The steering requires a fairly high effort, but doesn’t provide much feedback, unlike the sporty tuning characteristic of most Mazdas.

Just Wait Till Next Year… for the PHEV

Mazda would’ve been better off launching the MX-30 — a sleek, distinctive little vehicle — with the plug-in hybrid the automaker says will go on sale in 2022. The PHEV will use a small Wankel rotary engine — the type Mazda made famous in its RX sports cars — to generate electricity for longer drives.

No details are available yet. We can expect a smaller battery than the EV, but a literally infinitely longer range, because the rotary engine generates more electricity when the battery is depleted.

We don’t know how what the PHEV’s battery-only range will be.

The PHEV may be lighter. Its battery will almost certainly be smaller, but we don’t know how much, or how much weight the Wankel engine and gas tank will add. Mazda hasn’t said whether it plans to offer the MX-30 PHEV nationwide, but based on other automakers’ practice, sales will likely be concentrated in California and states that share its EV-encouraging emissions policy.