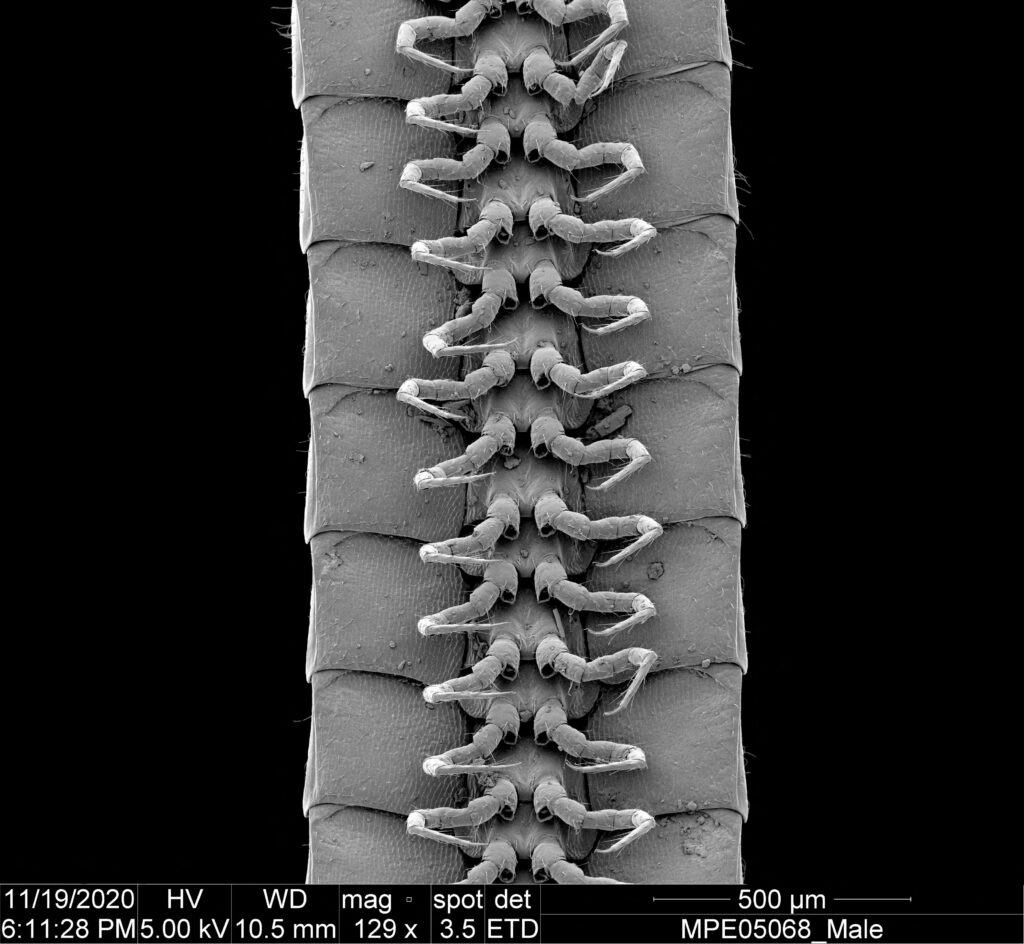 Deep underground in an exploratory drill hole in a mining region of Australia, scientists have discovered a remarkably elongated blind millipede possessing the most legs – 1,306, to be precise – of any known animal.

The threadlike pale-colored millipede reaches about 3-1/2 inches (95 mm) long and about four-hundredths of an inch (0.95 mm) wide, with a conical head, beak-shaped mouth and large antennae – likely one of its only sources of sensory input because it lacks eyes, scientists said on Thursday.

The creature is called Eumillipes persephone. The handful of individuals discovered lived up to almost 200 feet (60 meters) underground. Females had more legs than males.

“In my opinion this is a stunning animal,” said study co-author Bruno Buzatto, a principal biologist at Bennelongia Environmental Consultants in Perth, Australia.

“It represents the most extreme elongation found to date in millipedes,” Buzatto said. He added that this species lives deep in the soil, in an arid and harsh landscape where it is very hard to find any millipedes surviving in the surface.

Until now, the leggiest animal known was a California millipede species called Illacme plenipes, with 750 legs.

“We believe that the large number of legs provides an advantage in terms of traction/force to push their bodies forward through small gaps and fractures in the soil where they live,” Buzatto said.

The species lives in complete darkness in a subterranean habitat loaded with iron and volcanic rocks. Lacking eyes, it uses other senses such as touch and smell to perceive its environment. It belongs to a family of fungi-eating millipedes, so the researchers suspect that is what it eats.

It was discovered in Western Australia state’s Goldfields-Esperance region in an area where miners dig for gold and other minerals including lithium and vanadium. Four Eumillipes individuals were described in the study and another four have been found. None of them were observed alive.

The number of legs is not uniform within millipede species because they molt – shedding their tough outer layer – grow and add four-legged segments throughout their life.

“It’s quite common in millipedes for individuals to gain more legs as they molt so that older individuals have more legs than juveniles,” Buzatto said.

Roughly 13,000 species are known today, living in all sorts of environments, feeding on decaying vegetation and fungi. They play an important ecosystem role by breaking down the matter on which they feed, freeing up its constituent parts such as carbon, nitrogen and simple sugars.

“These nutrients can then be used by future generations of life,” Marek said.