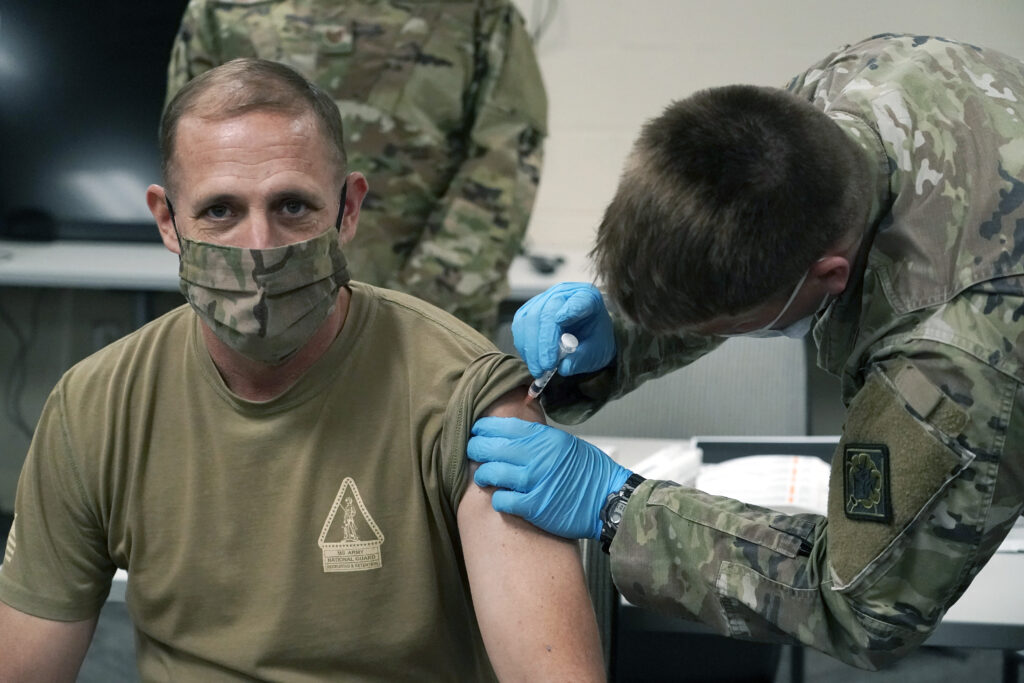 Army officials said Thursday that 98% of their active duty force had gotten at least one dose of the mandatory coronavirus vaccine as of this week’s deadline for the shots but that more than 3,800 soldiers flatly refused and could start being removed from the military next month.

The U.S. military’s largest service, however, reported the lowest number of service members seeking a religious exemption — a bit more than 1,700 soldiers — compared with the other three smaller services. In comparison, there are more than 4,700 in the Air Force, 3,000 in the Marine Corps and 2,700 in the Navy who are requesting religious exemptions, according to data released by the services in the past week. None has yet been approved.

The Pentagon announced earlier this year that the COVID-19 vaccine was mandatory for all service members, including the National Guard and Reserve. Defense Secretary Lloyd Austin has said repeatedly that getting the vaccine is critical to maintaining a heathy, ready force that can be prepared to defend the nation. The Pentagon is also weighing making the vaccine booster shots mandatory for service members.

The Army, which totals more than 478,000 active duty soldiers, had the last vaccine deadline among the services for their active duty troops, Wednesday. And it scored the second highest rate for those who have gotten at least one shot, 97.9%. The Navy leads with more than 98%, while the Air Force is at 97.5% and the Marine Corps is at 95%.

The Air Force this week said it has already discharged 27 airmen for refusing to obey a lawful order and get the COVID-19 vaccine, making them what officials believe are the first service members to be removed for disobeying the shot mandate.

The airmen were formally discharged for failure to obey an order. It is possible that some had other infractions on their records, but all had the vaccine refusal as one of the elements of their discharge.

Overall, the Army said that more than 6,200 soldiers are seeking some type of temporary or permanent exemption, including 641 medical requests and the 1,746 religious requests.
Of those 6,200 requests, nearly 3,900 have received an approved temporary exemption.

Four got a permanent medical exemption. Temporary exemptions can be for a variety of reasons ranging from medical, such as pregnancy, to administrative, such as someone who is retiring or is in a remote location where there are no readily available vaccines.

Members of the U.S. military are already required to get as many as 17 vaccines, depending on where they are deployed. The requirements — which include shots for smallpox, hepatitis, polio and the flu — also provide for a number of temporary and permanent exemptions for either medical or administrative reasons.