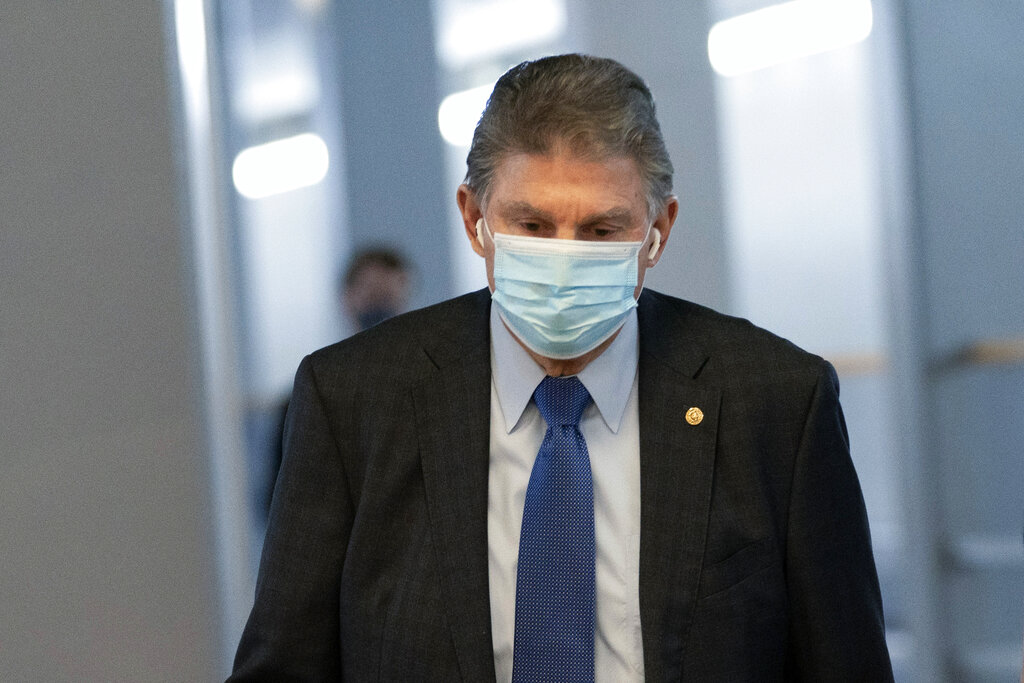 President Joe Biden and Sen. Joe Manchin were said to be sharply divided Wednesday over Democrats’ huge social and environment bill, with the holdout senator pushing to erase the measure’s improved child tax credit, as leaders’ hopes of passing the legislation before the end of year appears to be fading away.

The rocky status of their talks, described by a person only on condition of anonymity, were among several indications that Senate Majority Leader Chuck Schumer faces a struggle to even begin debate on the massive measure before the end of year break. Schumer, D-N.Y., has set a goal for passage of the 10-year, roughly $2 trillion measure by Christmas, in hopes of finally concluding his party’s eight months of infighting over the package.

Manchin told reporters that assertions he wants to strip the child tax credit provisions were “a lot of bad rumors,” adding that he’s “always been for child tax credits.” Asked if he backed one of the bill’s child tax credit improvements — monthly checks sent to millions of families — he said, “I’m not negotiating with any of you.”

In another factor complicating the bill’s immediate prospects, some Democrats wants Schumer to use December’s waning days to consider voting rights legislation, a primary party goal that Republicans have stymied.

Asked whether Congress should quickly consider the voting legislation and delay the $2 trillion bill to next year, Biden told reporters Wednesday, “If we can get a congressional voting rights done we should do it.” He added, “Nothing domestically is more important” than voting rights. Biden spoke as he toured tornado damage in Dawson Springs, Kentucky.

All of that produced a day of confusion in the Senate, where rank-and-file lawmakers and aides said they knew nothing about what legislation the chamber would tackle next, when and whether they would prevail.

Letting the social and environment legislation slip into next year, when congressional elections will be held, would be ominous for Democrats’ prospects for enacting the measure, which embodies many of Biden’s foremost domestic goals. The party will need support from all its members in the 50-50 Senate to overcome solid Republican opposition.

With Democrats having blown past previous self-imposed deadlines on the measure, another delay would fuel Republican accusations that they are incompetently running a government they control. Democrats are bracing for November elections when the GOP has a real chance of winning control of the House and Senate.

Word of Manchin’s stance prompted a backlash from colleagues, whom he has frustrated for months with constant demands to cut the bill’s size and scope. Many Democrats consider the expanded child tax credit crucial for the families it helps and for the legislation’s fate in the narrowly divided Congress. The measure also has money for health care, universal prekindergarten and climate change programs.

“It would be a disaster for working families and parents in this country,” Senate Budget Committee Chairman Bernie Sanders, I-Vt., said of the consequences if the child tax credit fell from the bill.

Another impediment to Democrats is a time-consuming review by the Senate parliamentarian, Elizabeth MacDonough, about whether many of the bill’s provisions violate the chamber’s rules and should be dropped. Written opinions from her on that process — including on provisions letting many migrants remain temporarily in the U.S. — may not be ready until the weekend or later.

Asked whether he would supply a pivotal vote to begin Senate debate on the legislation without rulings from MacDonough, Manchin said, “Everyone wants to see it, not just me.”

Biden and Manchin have spoken by phone about the legislation at least twice this week. White House deputy press secretary Karine Jean-Pierre said they were “great conversations” that have been “productive.”

Manchin recently said he wants all programs in the bill to run for its full 10-year duration and that the measure’s total price tag should be below $2 trillion. The legislation extends for just one year the extra child tax credit benefits that otherwise expire Dec. 31. They’re among the many temporary initiatives Democrats proposed to keep down costs.

A one-year extension of that credit is estimated to cost more than $100 billion. Extending it over a decade would cost more than $1 trillion, which would likely squeeze out other Democratic priorities.

The bill makes the maximum credit more generous, allows coverage for 17-year-olds and lets many of the benefits be paid by monthly checks, instead of annual refunds from the IRS. The Treasury Department says the families of 61 million children have benefited.

Before the overall bill can come to the Senate floor, Schumer must resolve Manchin demands to to curb the legislation’s cost and remove provisions he opposes, such as required paid family leave. Disputes among other lawmakers include how to increase federal tax deductions for state and local taxes.

Schumer has scheduled the Senate to be in session the week of Jan. 3, potentially creating time for lawmakers to plunge quickly back into work on the bill. Congress is seldom in session in early January in election years.

The House approved its version of the legislation in November.