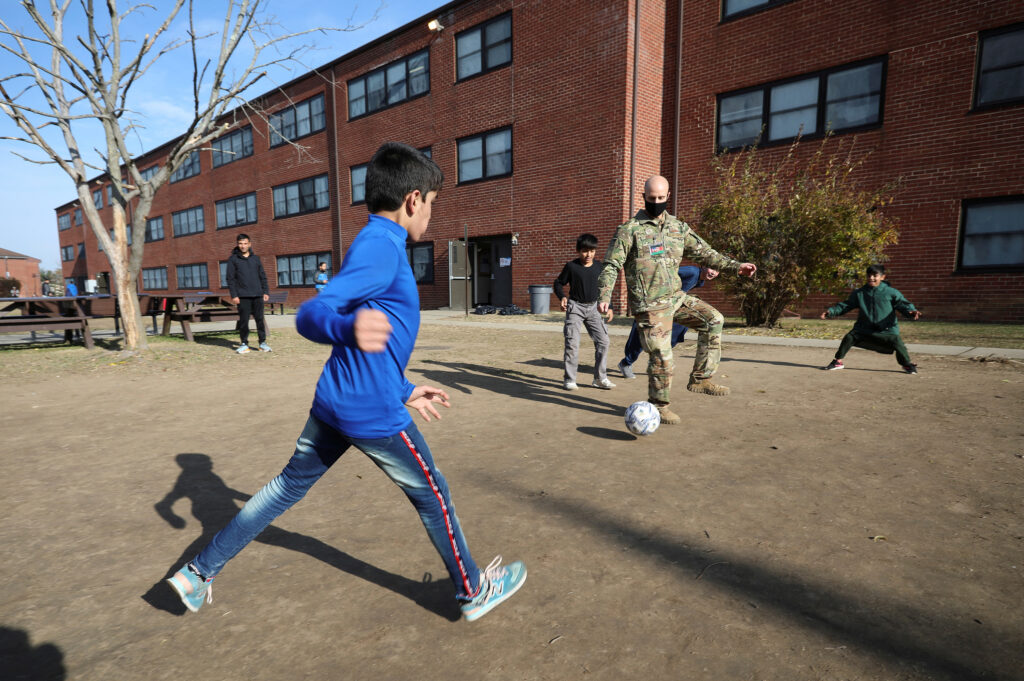 A new father stopped Col. Soleiman Rahel as he walked through the old soldiers’ barracks, now dormitories for thousands of people evacuated after the U.S. withdrawal from Afghanistan.

“I want you to know I named my son after you,” the man told him.

The gesture stands out for Rahel as a symbol of the significance of his work assisting the largest U.S. resettlement effort in half a century. For Rahel, it’s personal — 35 years ago, he too arrived from Afghanistan as a refugee.

When the Taliban stormed Kabul in August, Rahel temporarily left his wife and home in Sacramento and moved across the country to Joint Base McGuire-Dix-Lakehurst.

Afghans there know him as “the governor” of their new village.

Flights of up to 300 Afghans arrive at the base a couple of times a week. Three housing complexes make up Liberty Village. It is the largest of seven “safe havens” on military bases around the country where the federal government is working to process some 35,000 evacuees — and the only one still accepting new arrivals.

“We have built a small city,” said Gen. Adrian White, who is in charge of the 2,000 personnel who operate the village of 11,100 Afghans — referred to as “guests” — awaiting resettlement. “Our unwavering goal has been to make their life in this temporary location better every day.”

The federal government has evacuated 83,000 people from Afghanistan to the U.S., including nearly 75,000 Afghans and 8,000 U.S. citizens and green card holders. An additional 3,200 evacuees are waiting for U.S.-bound flights at military bases in the Middle East and Europe, according to Homeland Security.

The last-minute evacuation meant resettlement agencies didn’t have lead time to find housing for refugee families. The refugees are desperate to get off the bases and find jobs so they can start sending money back home. Afghanistan’s economy is collapsing and people are facing starvation. Many of those who have arrived want to end up in places with large Afghan communities, such as Washington, D.C., and California, but those regions have high rents.

On a recent morning, many families were out for a brisk morning walk, several pushing strollers. Six boys in traditional tunic shirts and pants kicked around a soccer ball, cheering when one scored a goal. Those on the base can also opt for daily legal counseling sessions, Zumba sessions, English classes and cultural orientation classes with topics including how to navigate police interactions.

At a conversational English class, two Afghan volunteer teachers stood before a few dozen children. On a whiteboard, they had written the vocabulary words of the day: stand, sit, hot, cold, table, chair.

In unison, the students chanted sentences using their new words. “This is a chair. That is a table.”

Jeff Drumtra, who leads social programming for the refugees at McGuire, said some children are working though their trauma and loss in drawings.

“You see the colors of the Afghan flag, either as a flag or in a heart. Some drawings have blood droplets coming from the heart,” he said.

Among those young artists is Sana Khairi, 18, who had been at the base for 47 days. In that time, she had finished 15 pieces in ink, colored pencil and oil paint. Her favorite depicted four Afghan soldiers struggling to raise their country’s flag.

“We never want to let anybody think that we’re going to let the Afghan flag drop on the floor,” she said in Dari through an interpreter.

Khairi said her father was in the Afghan military and worked with U.S. troops. When she and her parents arrived at the Kabul airport, he couldn’t make it safely through Taliban checkpoints and was left behind. Now he is in hiding.

Though she loves art and writing, Khairi said she dreams of being a surgeon — something that felt impossible in Afghanistan because of limited education and opportunities for women.

At Liberty Village, a linguist helped her translate some of her poems into English to share with military personnel. One, written Sept. 1 at a military base in Germany, is called “I Am a Refugee.”

“O motherland, your season changed. Your treasures, unseen. Your children, buried. Your flag, lowered. You have been abandoned. O motherland, you are forgotten. I packed for a journey. I don’t know its destination. My dreams like torn pages fall from your sky, and you fell in the hands of unkind.”

Families like Khairi’s are screened before they arrive. Homeland Security reviews fingerprints, photos and biometric and biographic data for all Afghans before they are permitted to board a flight to the U.S. Upon arrival, guests are taken for medical screening and vaccinated against COVID-19 and other illnesses. Dari, Pashto, Persian, Tajik and Urdu interpreters are on hand.

Just 3,500 of the 14,000 people housed at Liberty Village since it opened have been resettled, said Katy Swartz, an acting team lead with the State Department. Among all evacuated Afghans, more than 40% are eligible for special immigrant visas that are given to those who worked directly with the U.S. government, she said.

The others, who got out amid the chaotic U.S. withdrawal, will face a case-by-case determination of their eligibility to stay. Many will seek refugee status or asylum, while others will seek green cards through immediate relatives who are U.S. citizens or residents. All arriving Afghans were temporarily admitted to the U.S. with protection from deportation for two years.

More than 100 babies — including baby Rahel — have been born since the first Afghans arrived at McGuire on Aug. 24. Just under half of the guests are children younger than 14.

Each housing complex is overseen by a lieutenant colonel who is identified as the “mayor” and holds weekly town halls with residents. Two “governors,” including the elder Rahel, oversee the entire village.

Rahel came to the U.S. at age 15 after the Soviet invasion of Afghanistan in 1979. Assisting Afghans in a similar position feels like his life’s purpose, he said.

Villagers ask if they could someday join the military like he did. (Of course, he tells them.) Children ask if he is Afghan or American. (He explains he is both.) The hardest questions are from people asking how to bring over additional family members who are stuck in Afghanistan, including thousands of Afghan government workers, teachers, journalists and others at risk of persecution under Taliban rule and unable to move freely.

After Liberty Village goes back to just being Joint Base McGuire-Dix-Lakehurst, Rahel said, his work on Afghan resettlement will continue.

Rahel’s wife recently took in three Afghan women after her husband met two of them at the base and they relocated to California. He connected a 12-year-old boy who was a gifted soccer player to a team in the Bronx. The couple plan to become foster parents for Afghan children who were evacuated without parents or guardians.