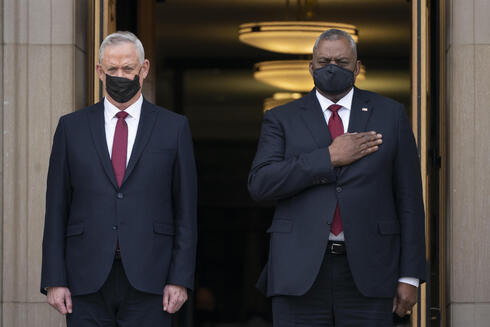 Defense Minister Benny Gantz on Thursday met with his U.S. counterpart Lloyd Austin in Washington to discuss bilateral ties between both countries and Israel’s concerns regarding Iran.

At the start of the meeting in the Pentagon, Gantz said that he hoped Jerusalem and Washington will deepen their ties regarding Tehran and its nuclear program.

“I look forward to deepening our dialogue and cooperation vis-à-vis Iran, including on topics of military readiness,” he said. “Iran is the biggest threat to global and regional peace and stability and building an existential threat to Israel.”

“Iran is not just a threat to our physical security. Iran poses a concrete threat to our way of life and our shared values,” he added.

“In its aspirations to become a hegemon, Iran seeks to destroy all traces of freedom, human dignity and peace in the Middle East and beyond. The nuclear program is a means to its hegemonic goals.”

Alluding to the ongoing talks in Vienna regarding the resumption of the 2015 nuclear deal, Gantz said that “Iran is playing games with a bad hand and it is playing [for] time.”

Austin said that the U.S. is “deeply concerned” about Iran’s nuclear actions and the “lack of constructive diplomatic engagement.”

He also said that if current policy regarding Iran fails, U.S. President Joe Biden has made clear “we are prepared to turn to other options.”

Reuters, citing a senior U.S. official, exclusively reported that Thursday’s U.S.-Israeli agenda was expected to include discussions about possible military exercises that would prepare for a worst-case scenario to destroy Iran’s nuclear facilities should diplomacy fail and if their nations’ leaders request it.

Also on Thursday, U.S. Special envoy for Iran Robert Malley told Al Jazeera that the United States was ready to hold direct negotiations with the Iranians on Tehran’s nuclear program, calling it the best solution to such a complicated issue.

Malley added that Iran did not present constructive proposals during previous negotiations and even retracted compromises it had made before.