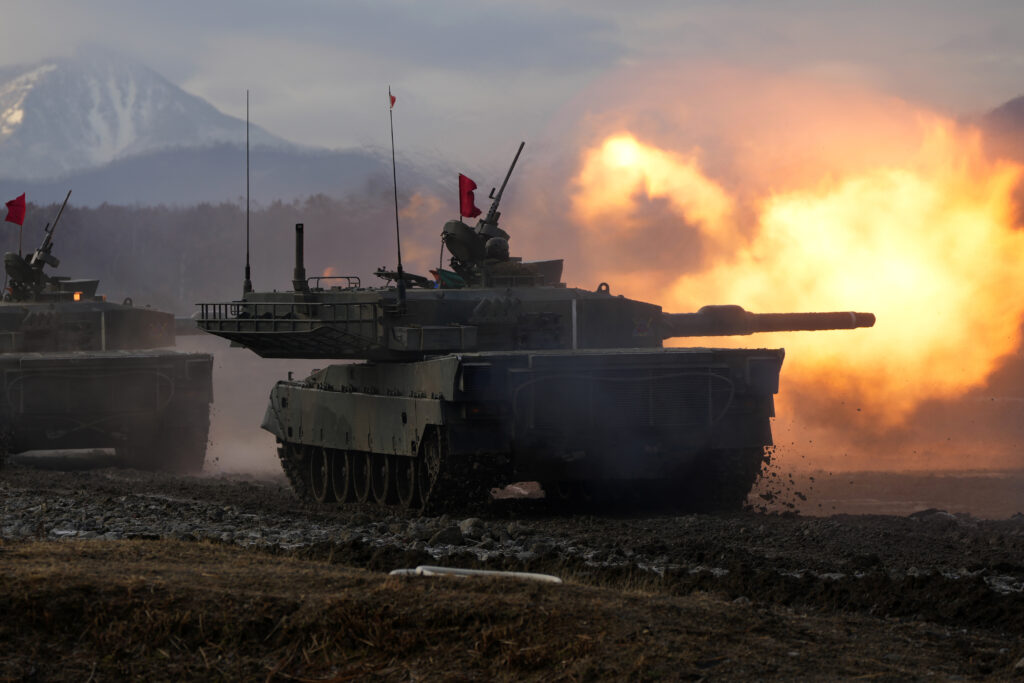 The earth shook and explosions boomed in the crisp winter air of Japan’s northern island of Hokkaido on Tuesday, as dozens of tanks and soldiers carried out drills at a Japanese army post that has long served to keep an eye on neighboring Russia, while showcasing Japanese military prowess as Tokyo also faces China’s rise.

A team of four tanks, each carrying three soldiers, fired shells and machine guns at targets meant to represent enemy missiles, armored vehicles or humans as hundreds of fellow soldiers cheered on the sidelines and waved their unit flags.

The drills, which opened this week and continue through Dec. 14, involve about 1,300 Ground Self-Defense Force troops — about 550 of whom are completing the actual drills, according to the Northern Army Headquarters.

The drill focuses on training soldiers for speed and accuracy in shooting targets that randomly appear from the range of 300 meters (984 feet) to 3 kilometers (1.9 miles) during a 15-minute session.

The training comes as China and Russia have stepped up military cooperation in recent years in an attempt to counter the region’s U.S.-led bloc.

Among Japan’s biggest worries is China’s increased naval activity, which has prompted Tokyo to rapidly step up troop deployment and missile defenses across southern Japan, including on remote islands.

China’s buildup of military facilities in the South China Sea has heightened Tokyo’s concerns in the East China Sea, where the Japanese-controlled Senkaku Islands are also claimed by Beijing, which calls them Diaoyu. China has sent a fleet of armed coast guard boats to routinely circle them and to go in and out of Japanese-claimed waters, sometimes chasing Japanese fishing boats in the area.

The result has been that Tokyo has shifted its focus on defense from northern to southern Japan in recent years. Heavy combat tanks and their units on Hokkaido — an old stronghold for Japanese forces — have also been reduced, as defense priorities have grown to include cyber, outer space and other tech dimensions.

But Hokkaido, with its large open spaces, remains an important training ground for Japanese troops, army officials said. Besides the northern island, Japan’s main tank exercise grounds are nearby Mount Fuji and Oita in the south.

Archconservative former premier Shinzo Abe significantly expanded Japan’s military role and budget, during his more than eight-year rule, which ended in 2020. Japan has rapidly grown its role in its security alliance with Washington, and has made more purchases of costly American weapons and equipment, including fighter jets and missile interceptors.