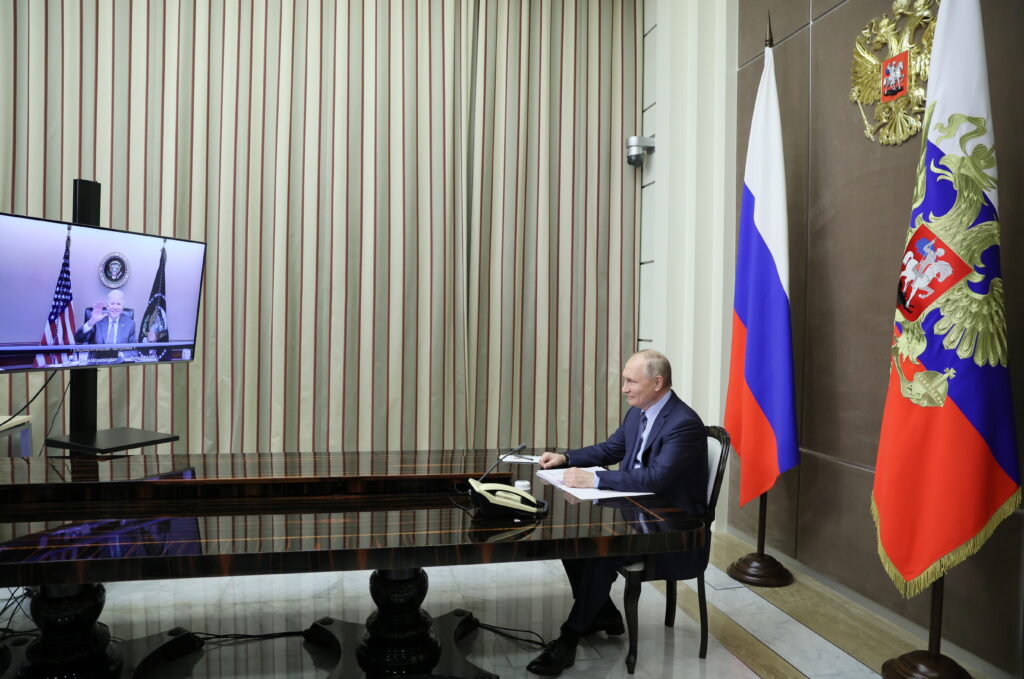 U.S. President Joe Biden told Russian President Vladimir Putin on Tuesday the West is concerned Russia will invade Ukraine and warned of “strong economic and other measures” as punishment should Moscow start a military conflict, the White House said.

The two leaders held two hours of virtual talks on Ukraine and other disputes in a video call about U.S.-Russian relations, which have sunk to their lowest point since the end of the Cold War.

The Kremlin, which said before Tuesday’s meeting that it did not expect any breakthroughs, has denied harboring any intention to attack Ukraine and has said its troop posture is defensive.

Biden voiced the “deep concerns of the United States and our European allies about Russia’s escalation of forces surrounding Ukraine,” the White House said, and “made clear that the U.S. and our allies would respond with strong economic and other measures in the event of military escalation.”

Biden reiterated U.S. support for Ukraine’s sovereignty and territorial integrity, the White House said, and called for de-escalation and diplomacy. Putin and Biden agreed to have their teams follow up.

Russian TV footage showed Biden and Putin greeting each other in a friendly manner at the start of the virtual summit. The two leaders talked for almost two hours, according to the White House.

Both sides say they hope the two leaders can hold an in-person summit to discuss ties between the two nations, which have long-standing differences over Syria, U.S. economic sanctions and alleged Russian cyber attacks on U.S. companies.

The Russian government issued a terse statement after the call. “Talks between Vladimir Putin and President of the United States Joseph Biden took place via videoconference,” it said.

U.S. officials said before the video conference that Biden would tell Putin that Russia and its banks could be hit with the toughest sanctions yet if it attacks Ukraine.

Sanctions, which one source said could target Russia’s biggest banks and Moscow’s ability to convert rubles into dollars and other currencies, are designed to dissuade Putin from using tens of thousands of troops massed near the Ukrainian border to attack its southern neighbor.

Moscow has voiced rising vexation over Western military aid to Ukraine, a fellow former Soviet republic that has tilted towards the West since a popular revolt toppled a pro-Russian president in 2014, and what it calls creeping NATO expansion.

Moscow has likewise questioned Ukrainian intentions and said it wants guarantees that Kyiv will not use force to try to retake territory lost in 2014 to Russia-backed separatists, a scenario Ukraine has ruled out.

“We’re looking for good, predictable relations with the United States. Russia has never intended to attack anyone, but we have our concerns and we have our red lines,” said Kremlin spokesperson Dmitry Peskov before the talks.

Washington has accused Russia of massing troops near the border with Ukraine to intimidate an aspiring NATO member, suggesting it could be a repeat of Moscow’s 2014 playbook, when it seized the Black Sea peninsula of Crimea from Ukraine.

For Moscow, the growing NATO embrace of a neighboring former Soviet republic – and what it sees as the nightmare possibility of alliance missiles in Ukraine targeted against Russia – is a “red line” it will not allow to be crossed. Leaders from Britain, the United States, France, Germany and Italy were to hold a call at on Tuesday following the Biden–Putin talks, the White House and British Prime Minister Boris Johnson’s office said.

The same allies spoke on Monday and “agreed to stay in close touch on a coordinated and comprehensive approach in response to Russia’s military build-up on Ukraine’s borders,” the White House said.

Calling for everyone to keep “a cool head”, Peskov said it was vital that Putin and Biden speak given what he called the extraordinary escalation of tensions in Europe.

The Russian ruble weakened slightly on Tuesday, with some market analysts predicting the talks would de-escalate tensions and others saying that the U.S. sanctions threat eroded hopes of finding common ground.

Should Russia invade Ukraine, targeting Putin‘s inner circle has been discussed but no decision made, a U.S. source said. Sanctions against Russia’s biggest banks and curbing the conversion of rubles into dollars and other currencies were also being considered, another source said.

The United States has already evaluated the possibility of restricting investors’ ability to buy Russian debt on the secondary market, a measure that even if taken only by Washington was seen as having a severe impact on Russia’s government, according to a person with direct knowledge of the matter.

CNN reported sanctions could include disconnecting Russia from the SWIFT international payment system used by banks around the world, an extreme step that would likely require coordination with allies.

German Gref, the chief executive of Russia’s top bank Sberbank, on Tuesday called that idea “nonsense” and “impossible to execute”.

Ukraine and NATO powers accuse Russia of building up troops near the border, sparking fears of a possible attack. Moscow denies any such plan and accuses Kyiv of massing its own forces in its east, where Russian-backed separatists control a large part of Ukrainian territory.

The United States has urged both countries to return to a set of largely unimplemented agreements signed in 2014 and 2015 which were designed to end the war in eastern Ukraine.

Putin has said he wants legally binding guarantees NATO will not expand further eastwards and a pledge that certain types of weapons will not be deployed in countries close to Russia, including Ukraine.