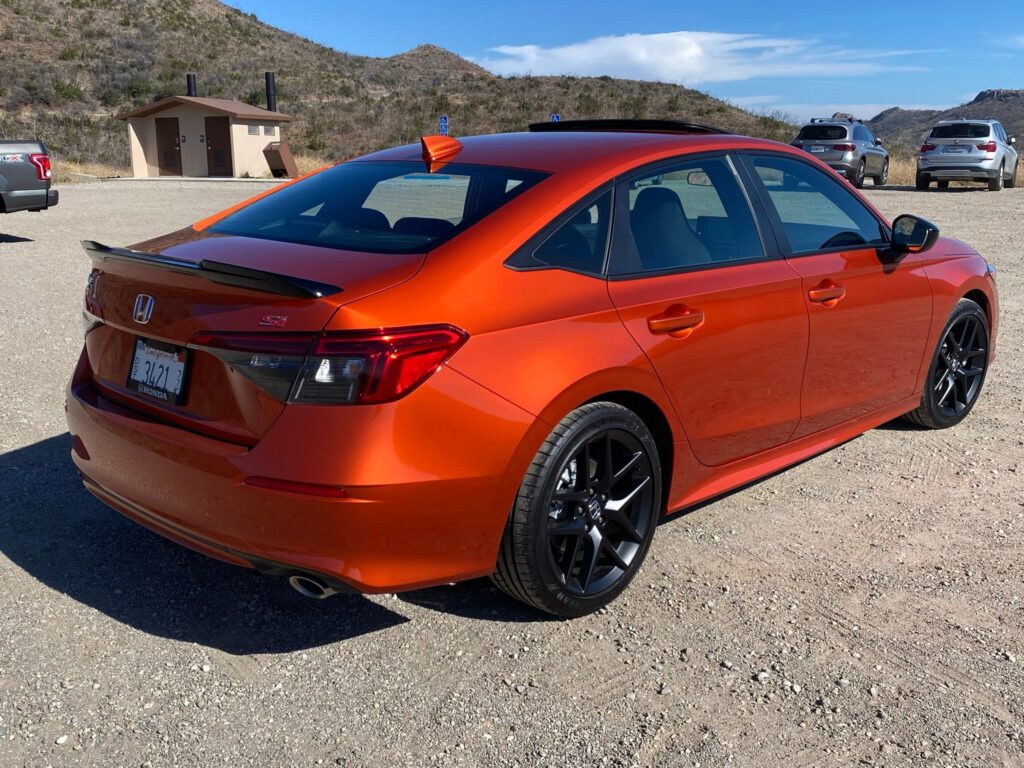 Honda has sold hundreds of thousands of Civic Si compacts since the badge debuted in 1986, but in an SUV-crazed world, the sporty little car just may qualify as the auto industry’s best, and best-kept secret.

Attractively, but modestly trimmed, the Si doesn’t scream for attention like some pocket rockets, but it’s a scream around curves, as the coppery one I drove around some of Southern California’s most challenging mountain roads proved shortly before Thanksgiving.

The Si — all new this year and based on the new Civic model that debuted a few months ago — is easy to drive in everyday traffic, but when it comes to life on twisting roads, its precise steering, beefy brakes, stiff chassis, and modest yet enjoyable power, most pay off.

The Civic Si and the VW Golf GTI — also new this year — ensure that while SUVs may rule the sales charts, there’s a lot of life left in the class of sporty and affordable compacts they lead.

How Much? What Do You Get?

Civic Si prices start at $27,300. All models get a 200-horsepower turbocharged 1.5L four-cylinder engine and six-speed manual transmission. There is no automatic transmission, a throwback trait that will limit Si sales but make its devotees even more committed to the car.

Summer tires add $200. It’s money well spent, and less of an extravagance than you might think: Swap them for winter tires when the temperature falls below 40 degrees; they’ll last longer than you expect and the winters will keep you safe and protect the Si’s striking matte black alloy wheels from winter corrosion and dings.

Performance compacts used to be a growth market. Virtually every brand offered a model that at least looked sporty. Some actually were, though many were all show and no go.

The attrition in compact cars that attended the SUV’s ascendance weeded out the poseurs. The OGs are pretty much all that’s left: Civic Si, VW Golf GTI and Subaru WRX.

The Hyundai Elantra N hopes to join the leaders soon. It’ll have more power and a correspondingly higher price.

Prices do not include destination charge ($1,015)

The compact performance class is about more than raw power, though. Handling and tractability matter at least as much, in part because the front-wheel-drive format that dominates the group doesn’t reward the massive torque rear-drive sports and muscle cars boast.

Modest power is one of the Civic Si’s defining characteristics and greatest charms. While a mere 200 hp may not look like enough to exit the parking lot in a world full of Dodge Hellcats, ludicrous-mode Teslas and WTF-mode GMC Hummers, it’s not how many, but how you use ’em. The Honda Civic Si uses every horsepower and each of its 192 pound-feet of torque widely.

The 1.5L turbocharged engine is remarkably flexible, pulling smoothly without complaint at low speed in second and third gears.

Honda’s shifters remain among the industry’s best, with short throws and easy action. The clutch didn’t require much effort.

One of the beauties of a modestly powered vehicle and a great chassis on a tight challenging road is that you can have loads of fun without going dangerously fast. On snaky Mulholland Highway and neighboring canyon-clinging roads in LA and Ventura counties, that included some tight curves that lived up to their 15-mph posted speed.

The Si’s steering is firm and precise, equally suited to mountain nail-biters and sweeping curves on the scenic Pacific Coast Highway.

The cabin is quiet and comfortable. There was little wind or road noise, despite the grippy summer tires.

The gauges are big and clear. A 9-inch touchscreen controls many features and displays navigation and other information well.

Wireless Apple CarPlay and Android Auto are available. Wireless charging is not.

Honda gets full marks for gauge clarity and climate control ease of use, but for some reason the automaker continues to balk at providing a tuning dial for its audio system. Thankfully, it has restored a volume dial.

I realize that most people don’t tune their radios often, relying on presets, but having to press the “skip” command on the touchscreen for each station you advance, or retreat to another menu for a list of all stations, is a pain in the neck.

Other than that admittedly minor shortcoming — shared with other Civic models — it’s hard to find any fault in the Civic Si.

Price as tested: $27,500 including destination.