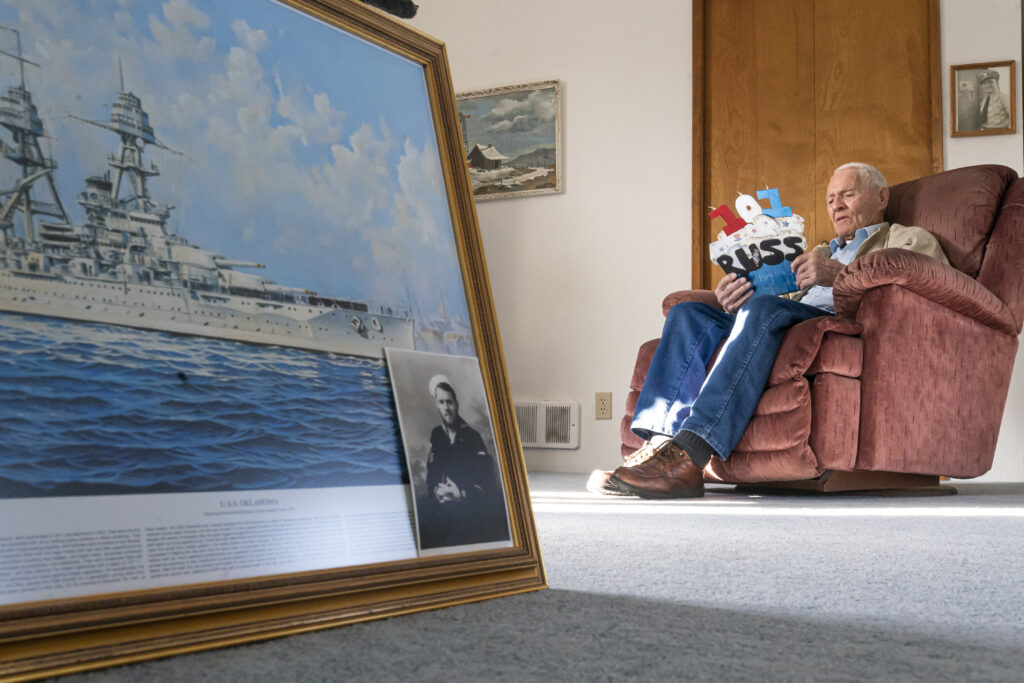 But a split-second decision on that December morning 80 years ago changed his mind, and likely saved his life.

“They started closing that hatch. And I decided to get out of there,” Russell, now 101, said in a recent interview.

Within 12 minutes his battleship would capsize under a barrage of torpedoes. Altogether 429 sailors and Marines from the Oklahoma would perish — the greatest death toll from any ship that day other than the USS Arizona, which lost 1,177.

Russell recalls heading topside when the attack started because he was trained to load anti-aircraft guns and figured he could help if any other loader got hurt.

But Japanese torpedo planes dropped a series of underwater missiles that pummeled the Oklahoma before he could get there. Within 12 minutes, the hulking battleship capsized.

“Those darn torpedoes, they just kept hitting us and kept hitting us. I thought they’d never stop,” Russell said. “That ship was dancing around.”
Russell clambered over and around toppled lockers while the battleship slowly rolled over.

“You had to walk sort of sideways,” he said.

Once he got to the main deck, he crawled over the ship’s side and eyed the USS Maryland moored next door. He didn’t want to swim because leaked oil was burning in the water below. Jumping, he caught a rope hanging from the Maryland and escaped to that battleship without injury.

He then helped pass ammunition to the Maryland’s anti-aircraft guns.

After the battle, Russell and two others went to Ford Island, next to where the battleships were moored, in search of a bathroom. A dispensary and enlisted quarters there had turned into a triage center and place of refuge for hundreds of wounded, and they found horribly burned sailors lining the walls. Many would die in the hours and days ahead.

Russell still thinks about how lucky he was. He ponders why he decided to go topside on the Oklahoma, knowing most of the men who stayed behind likely were unable to get out after the hatch closed.

Russell remained in the Navy until retiring in 1960. He worked at Air Force bases for the next two decades and retired for good in 1980.

His wife, Violet, passed away 22 years ago, and he now lives alone in Albany, Oregon. He drives himself to the grocery store and the local American Legion post in a black Ford Explorer while listening to polka music at top volume. When he’s not hanging out with other veterans at the legion, he reads military history and watches broadcast media. He keeps a stack of 500-piece puzzles to keep his mind sharp.

For decades, Russell didn’t share much about his experiences in World War II because no one seemed to care. But the images from Pearl Harbor still haunt him, especially at night.