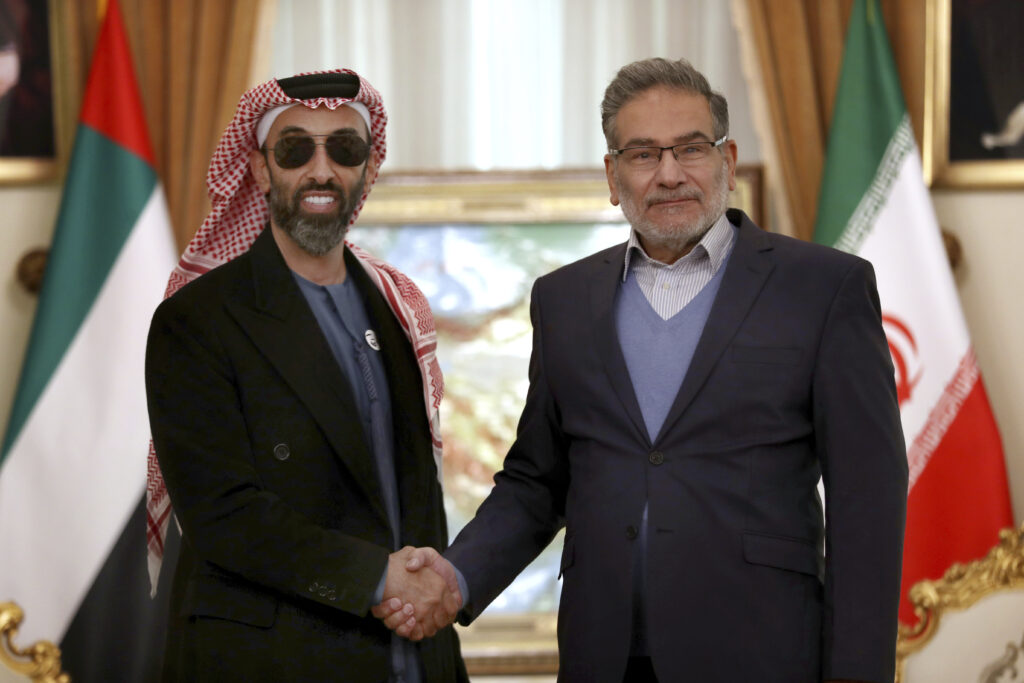 The national security adviser of the United Arab Emirates met Monday with his Iranian counterpart and the country’s hardline president in Tehran, a major visit for the Gulf Arab federation that has long viewed the Islamic Republic as its main regional threat.

The visit by Sheikh Tahnoon bin Zayed Al Nahyan comes as the Emirates and Saudi Arabia are both negotiating with Iran amid efforts in Vienna to save Tehran’s tattered nuclear deal with world powers.

The UAE, home to Abu Dhabi and Dubai, reached a diplomatic recognition deal last year with Israel, increasing tensions with Tehran. The UAE has long served as a lifeline to the outside world for Iran amid international sanctions.

Sheikh Tahnoon, wearing a black suit jacket and his signature aviator sunglasses, met with Ali Shamkhani, the head of Iran’s Supreme National Security Council. The two men smiled and shook hands in front of journalists before their meeting, a large map of Iran and the Persian Gulf looming behind them, with just a sliver of the Emirates visible on it.

Sheikh Tahnoon’s brother is Sheikh Mohammed bin Zayed Al Nahyan, Abu Dhabi’s powerful crown prince and long the de facto ruler of the Emirates, a federation of seven sheikhdoms. Under Sheikh Mohammed, the UAE has embarked on a rapid expansion of its military forces to counter what they see as the threat of Iran. The Emirates also hosts U.S. and French forces and its Jebel Ali port is the U.S. Navy’s busiest port of call outside of America.

Sheikh Tahnoon also has held at least one meeting with the head of the Israeli Mossad intelligence service.

Sheikh Mohammed has long feared a nuclear-armed Iran, according to U.S. diplomatic cables published by WikiLeaks.

But the UAE has pulled back from the Saudi-led war in Yemen against the Iranian-backed Houthi rebels. Since the outbreak of the coronavirus pandemic, the Emirates also has sought to mend diplomatic ties to Turkey, viewed with suspicion over offering a haven for Islamists, and Qatar, which the UAE boycotted for years with several other nations as part of a political dispute.

Iranian state media later quoted Shamkhani as saying that “warm and friendly” relations between the countries remain a priority and that they shouldn’t be affected by other nations — likely a reference to the United States and Israel. Sheikh Tahnoon also met with President Ebrahim Raisi, a hardline protégé of Supreme Leader Ayatollah Ali Khamenei. Syria’s Foreign Minister Faisal Mekdad was also visiting Tehran on Monday.

As the meeting took place, however, Iranian Foreign Ministry spokesman Saeed Khatibzadeh criticized the Emirates for its purchase this past weekend of 16 billion euros worth of advanced Rafale jet fighters from France. The UAE also plans a $23 billion purchase including advanced stealth F-35 fighters as well, after its recognition of Israel.

Khatibzadeh urged France to “behave more responsibly” and criticized the “militarizing of our region.”

“We are witnessing billions of dollars of arm sales to regional countries though they hold many meetings about our missiles,” Khatibzadeh said, mentioning Iran’s ballistic missile program. “With these actions, we become more determined to make our defense shield more active.”

Talks over Iran’s program in Vienna broke up last week after Tehran offered new demands. Khatibzadeh insisted Iran wasn’t after a “temporary” agreement from the negotiations, which he described as resuming “later this week.” European officials have yet to announce a time for the talks to restart.