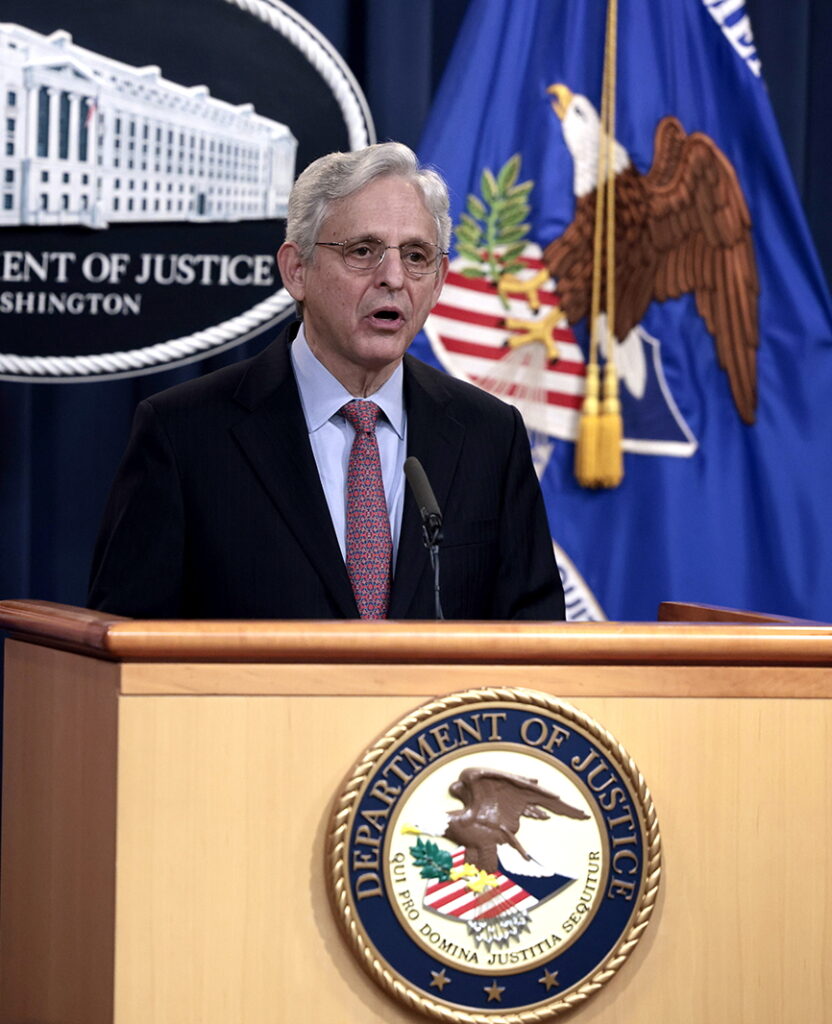 The Biden administration sued Texas on Monday to block its new congressional map, accusing the state of gerrymandering to shut out nonwhites in violation of federal voting rights law.

Attorney General Merrick Garland announced the enforcement action at Justice Department headquarters, saying the redistricting plans Texas adopted in recent months “deny or abridge the rights of Latino and black voters to vote on account of their race, color or membership in a language minority group.”

Texas gained two U.S. House seats after the 2020 census, more than any other state. The GOP-controlled Legislature set aside for Democrats 14 of the 38 seats, or 37%, in a state where the Republican nominee for president, Donald Trump, topped Democrat Joe Biden by less than 6 percentage points.

“Texas’s population grew by 4 million people from 2010 to 2020, and 95% of that growth came from minority populations,” said Vanita Gupta, associate attorney general.

Yet, she noted, both of the new U.S. House districts were drawn with white voting majorities.

“The Department of Justice’s absurd lawsuit against our state is the Biden administration’s latest ploy to control Texas voters,” he said in a written statement. “I am confident that our Legislature’s redistricting decisions will be proven lawful, and this preposterous attempt to sway democracy will fail.”

The plan adopted by the Legislature and signed by Gov. Greg Abbott also eroded Latino clout in a West Texas district that has been the only thing close to a swing district in Texas.

Freshman GOP Rep. Tony Gonzales replaced another Republican, Will Hurd, in last year’s election, but earlier in the decade the seat went back and forth between the parties. The Legislature beefed up GOP control for the coming decade, as it did in many other GOP-held districts.

“This is the third time in three decades where Texas has eliminated a Latino electoral opportunity in this same district, despite previous court determinations that this violates the law,” Gupta said. “Decade after decade, courts have found that Texas has enacted redistricting plans that deliberately dilute the voting strength of Latino and black voters and that violate the Voting Rights Act. … The Justice Department will not stand idly by in the face of unlawful attempts to restrict access to the ballot.”

The 14-24 allocation of U.S. House seats wouldn’t have passed muster under a failed Democratic plan in Congress, the Freedom to Vote Act, which uses recent federal elections as the benchmark to determine whether a congressional map is even modestly fair.

Garland asserted that the map would not have passed muster at the Justice Department if Texas still had to obtain preclearance for any changes that could impact voters’ rights, including redrawing districts, changing requirements for absentee ballots and IDs, or even moving a polling site.

Preclearance ended for Texas and other states with a history of discrimination in 2013, when the Supreme Court defanged the landmark Voting Rights Act. The court scrapped as outdated the formula used to decide which jurisdictions deserved such preclearance scrutiny.

Republicans have blocked efforts to restore federal oversight ever since, leaving minority groups with little recourse. Advocates and the Justice Department can only sue after a state has adopted new maps and rules, and such challenges can take years to work through the courts.

”Were that preclearance tool still in place, we would likely not be here today,” he said.

Before the Legislature finalized district lines to be used for the next decade, starting in 2022, the Mexican American Legal Defense and Educational Fund asked a federal court to toss out the maps.

MALDEF argued that all four plans — for elections to the U.S. House, state House and Senate, and State Board of Education — dilute the voting strength of Hispanics in violation of the Voting Rights Act.

A three-judge panel consolidated the case with six other redistricting lawsuits that followed.

On Friday, the judges rejected Texas’ request to toss the suits. The state’s lawyers had argued that Section 2 of the Voting Rights Act, which allows for legal challenges, does not let advocacy groups file lawsuits on behalf of minority voters.

The Justice Department had filed a “statement of interest” in the cases, urging the court to dismiss the state’s argument.

Several civil- and voting-rights groups, as well as individual voters, are among the plaintiffs.

White voters comprise the majority of 23 of the 38 newly drawn congressional districts, up from 22 in the map used for the past decade.

The number of districts with a majority of Hispanic voters dropped from eight to seven. The current map has one district with a black voter minority. The new map has none.

Democrats in the Texas House lauded the Justice Department, taking it as a vindication of their own futile complaints about the remap.

More than 50 members of the House Democratic Caucus decamped to Washington for weeks to break quorum and delay action on redistricting, but eventually they returned for a special session at which Republicans pushed through their plan.