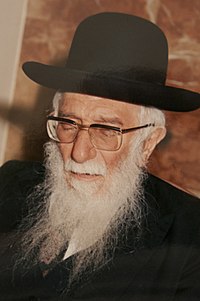 On Erev Shabbos, Harav Avraham Shalush, zt”l, who served for decades as Chief Rabbi of Kfar Saba, passed away at age 92.

Harav Shalush was born in Morocco and immigrated to Eretz Yisrael with his parents, who settled in the Old City of Yerushalayim. The riots of 5698-9/1928-9 forced the family to move to the center of town, to Jaffa Street.

The young Rav Avraham studied in Yeshivat Porat Yosef in the Old City, until its fall to the Jordanians during the War of Independence. He then studied at Mercaz Harav and in 1959, he was appointed Chief Rabbi of Kfar Saba, the position he held until his last day.

He served his kehillah for 60 years. In 2007 he was joined by Ashkenazi Chief Rabbi Harav Yaakov Pinchas Shir.

The levayah was held last Friday. There, Deputy Mayor of Kfar Saba Eitan Tzanani recalled: “Harav Avraham Shalush was a talmid chacham, a man of pleasant ways and utter concern for and dedication to the spiritual needs of the general public in Kfar Saba. … His way was to be able to deal with all types of people and foster understanding among all segments of the public. He was able to relate to every individual, each with his own difficulties, and work diligently to find for each one the proper solution.”

Rabbi Sasson Trabelsi, chairman of the Kfar Saba Religious Council, said at the levayah: “Harav Shalush was an exceptional talmid chacham, with sterling character traits. Kfar Saba is mourning the loss of this exceptional personage. The Rav’s inimitable personality and the fact that he merited such arichas yamim enabled him to serve as a bridge between the previous generation and the present one.”