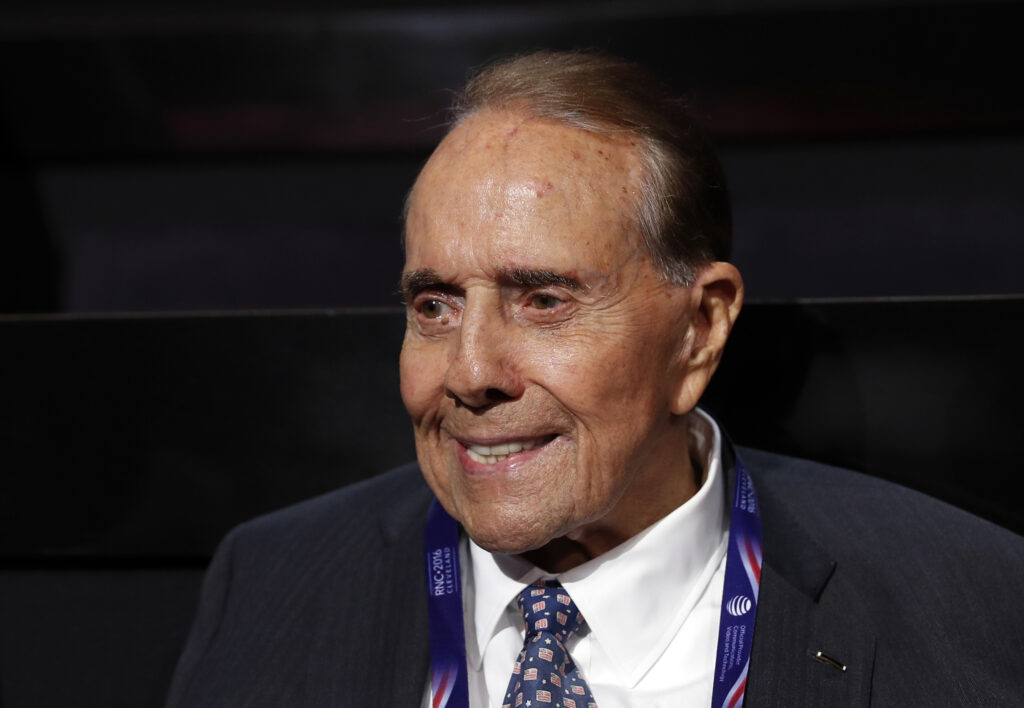 Bob Dole, who overcame disabling war wounds to become a sharp-tongued Senate leader from Kansas, a Republican presidential candidate and then a symbol and celebrant of his dwindling generation of World War II veterans, has died. He was 98.

During his 36-year career on Capitol Hill, Dole became one of the most influential legislators and party leaders in the Senate, combining a talent for compromise with a caustic wit, which he often turned on himself but didn’t hesitate to turn on others, too.

He shaped tax policy, foreign policy, farm and nutrition programs and rights for the disabled, enshrining protections against discrimination in employment, education and public services in the Americans with Disabilities Act.

Today’s accessible government offices and national parks, sidewalk ramps and the sign-language interpreters at official local events are just some of the more visible hallmarks of his legacy and that of the fellow lawmakers he rounded up for that sweeping civil rights legislation 30 years ago.

Dole devoted his later years to the cause of wounded veterans, their fallen comrades at Arlington National Cemetery and remembrance of the fading generation of World War II vets.

Thousands of old soldiers massed on the National Mall in 2004 for what Dole, speaking at the dedication of the World War II Memorial there, called “our final reunion.” He’d been a driving force in its creation.

“Our ranks have dwindled,” he said then. “Yet if we gather in the twilight it is brightened by the knowledge that we have kept faith with our comrades.”

He tried three times to become president. The last was in 1996, when he won the Republican nomination only to see President Bill Clinton reelected. He sought his party’s presidential nomination in 1980 and 1988 and was the 1976 GOP vice presidential candidate on the losing ticket with President Gerald Ford.

Through all of that he carried the mark of war. Charging a German position in northern Italy in 1945, Dole was hit by a shell fragment that crushed two vertebrae and paralyzed his arms and legs. The young Army platoon leader spent three years recovering in a hospital and never regained use of his right hand.

To avoid embarrassing those trying to shake his right hand, Dole always clutched a pen in it and reached out with his left.

Dole won a seat in Congress in 1960, representing a western Kansas House district. He moved up to the Senate eight years later when Republican incumbent Frank Carlson retired.

There, he antagonized his Senate colleagues with fiercely partisan and sarcastic rhetoric, delivered at the behest of President Richard Nixon. The Kansan was rewarded for his loyalty with the chairmanship of the Republican National Committee in 1971, before Nixon’s presidency collapsed in the Watergate scandal.

He served as a committee chairman, majority leader and minority leader in the Senate during the 1980s and ’90s. Altogether, he was the Republicans’ leader in the Senate for nearly 11½ years, a record until Kentucky Sen. Mitch McConnell broke it in 2018. It was during this period that he earned a reputation as a shrewd, pragmatic legislator, tireless in fashioning compromises.

After Republicans won Senate control, Dole became chairman of the tax-writing Finance Committee and won acclaim from deficit hawks and others for his handling of a 1982 tax bill, in which he persuaded Ronald Reagan’s White House to go along with increasing revenues by $100 billion to ease the federal budget deficit.

Dole became Senate leader in 1985 and served as either majority or minority leader, depending on which party was in charge, until he resigned in 1996 to devote himself to pursuit of the presidency.

In September 2017, Congress voted to award Dole its highest expression of appreciation for distinguished contributions to the nation, a Congressional Gold Medal. That came a decade after he received the Presidential Medal of Freedom.

Congress honored Dole again in 2019 by promoting him from Army captain to colonel, in recognition of the military service that earned him two Purple Hearts.