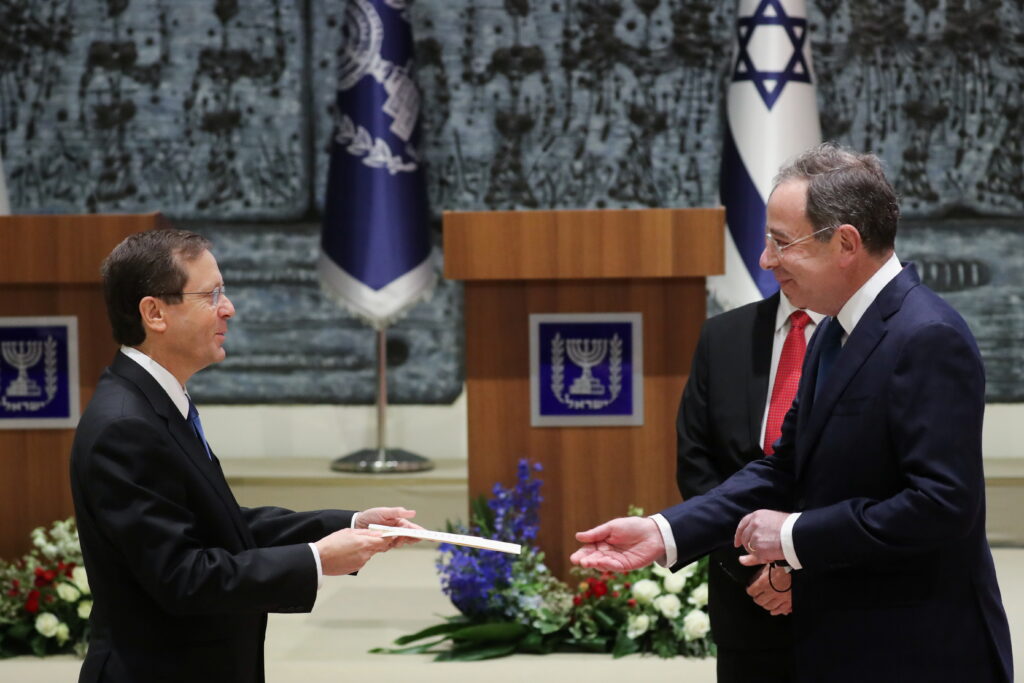 The new U.S. ambassador to Israel, Tom Nides, presented his diplomatic credentials to President Isaac Herzog at the president’s residence in Yerushalayim on Sunday.

In his warm welcoming remarks, Herzog nevertheless brought up the fraught issue of the negotiations for a renewal of the Iranian nuclear deal, over which the two countries seem to at odds in recent days.

“Israel will welcome a comprehensive, diplomatic solution which permanently solves the Iranian nuclear threat,” said Herzog, following up with the automatic caveat:

“In the case of a failure to achieve such solution, Israel is keeping all options on the table, and it must be said that if the international community does not take a vigorous stance on this issue — Israel will do so. Israel will protect itself.”

Nides said that the two countries will work closely to counter the threat Iran poses to Israel and the region, and that the U.S. will not allow Iran to get a nuclear weapon.

He also pledged that the U.S. will support Israel’s agreements with Arab countries, such as the Abraham Accords, but that they cannot serve as a replacement for a peace process with the Palestinians.

Said Herzog: “Israel very much looks forward to working together in harmony and in full partnership. You are coming to a more hopeful region. The Abraham Accords are a real strategic and regional gamechanger. It is essential that we realize the potential of these historic accords alongside the United States of America.

“I was pleased to discuss this with the Crown Prince of the United Arab Emirates, Sheikh Mohammed bin Zayed, in our warm and friendly phone conversation over the weekend,” Herzog told Nides.

“I will stand up against all efforts to isolate and delegitimize Israel internationally,” Nides pledged, referring to BDS.

The U.S. has been without a permanent ambassador to Israel since President Joe Biden entered office in January.