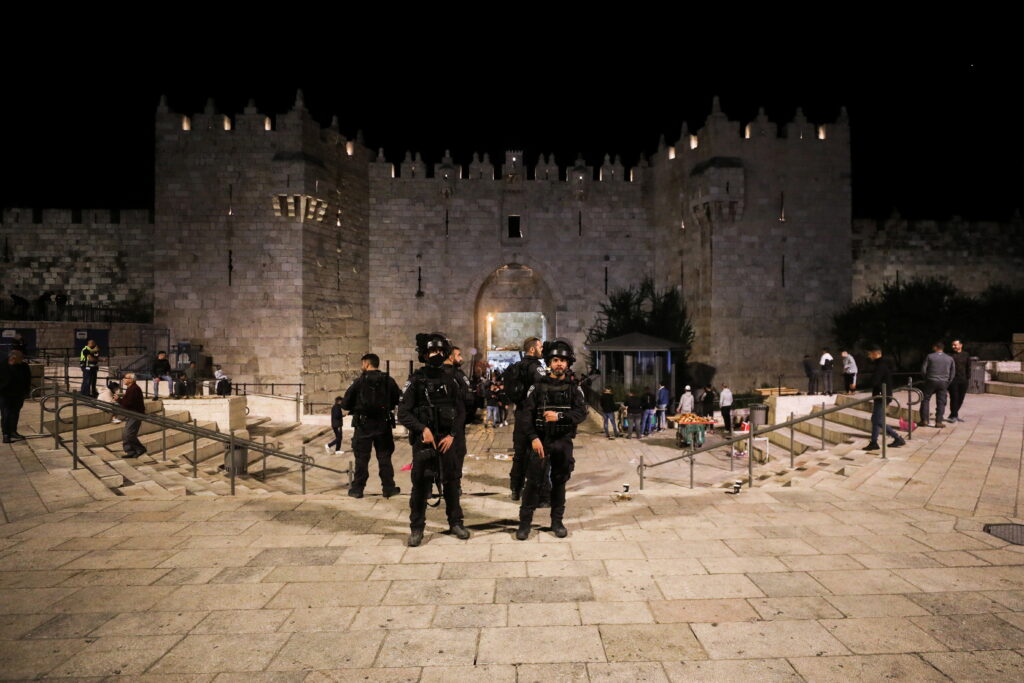 A chareidi man in his 20s was seriously wounded in a terrorist attack in the Old City of Yerushalayim late on Shabbos afternoon after being stabbed by a Palestinian terrorist. The latter was shot dead by security forces on the scene.

The incident took place near the Damascus Gate, a crowded area that is often the scene of demonstrations, clashes and terrorist attacks.

The Border Police said the suspect also attempted to stab a policeman before he was shot.

The victim was rushed to Shaare Zedek Medical Center in serious condition with an apparent stab wound to his neck. He was listed later Motzoei Shabbos in stable condition.

Channel 12 identified the terrorist as Mohamed Shawkat Salima, 25, from Salfit, in Yehudah and Shomron. Police officials told the news outlets he was in Israel illegally and had a prior arrest record.

The police released a surveillance video in which the terrorist can be seen stabbing the chareidi man and then trying to stab a police officer before being shot and falling to the ground.

The footage sparked controversy as it showed Israeli officers shooting the terrorist again after he was already lying on the ground.

Hamas praised the attack as an “act of heroism,” but stopped short of claiming responsibility for it. The terrorist group slammed Israel for the terrorist’s “execution,” calling it “a barbaric crime that reflects the criminal nature of the occupation.”

The Border Police stressed that the officers at the scene “acted professionally and resolutely when seeking to engage the assailant,” adding that in past cases terrorists believed to be neutralized had gotten up and tried to attack the troops.

He said Border Police troops “are deployed nationwide and across Yerushalayim to ensure the public’s sense of safety. Our officers will continue to stand guard professionally and resolutely. As a professional corps, we will study this incident, as we do in any incident.”

Prime Minister Naftali Bennett also offered the troops his support, saying they “acted very quickly and resolutely, as is expected of police officers, against a terrorist who tried to murder an Israeli civilian.

“I wish to convey to them my full backing. That is how our forces are expected to act and that is how they acted. We must not allow our capital to become a terror hotspot.”

Arab politicians, however, lambasted what they called the police’s excessive use of force.

Regional Cooperation Minister Esawi Frej said that “faced with attempted murder, assailants should be shot to save lives, not to take [the terrorists’] lives when they no longer pose a threat.”

The policemen’s conduct as seen in the video “expresses an indifference to human life that should be investigated,” he said.

Joint Arab List MK Aida Touma-Suleiman was cited in local media as saying that the policemen “executed the man when he no longer posed a threat… a terrible crime. This is the reality that occupation creates.”