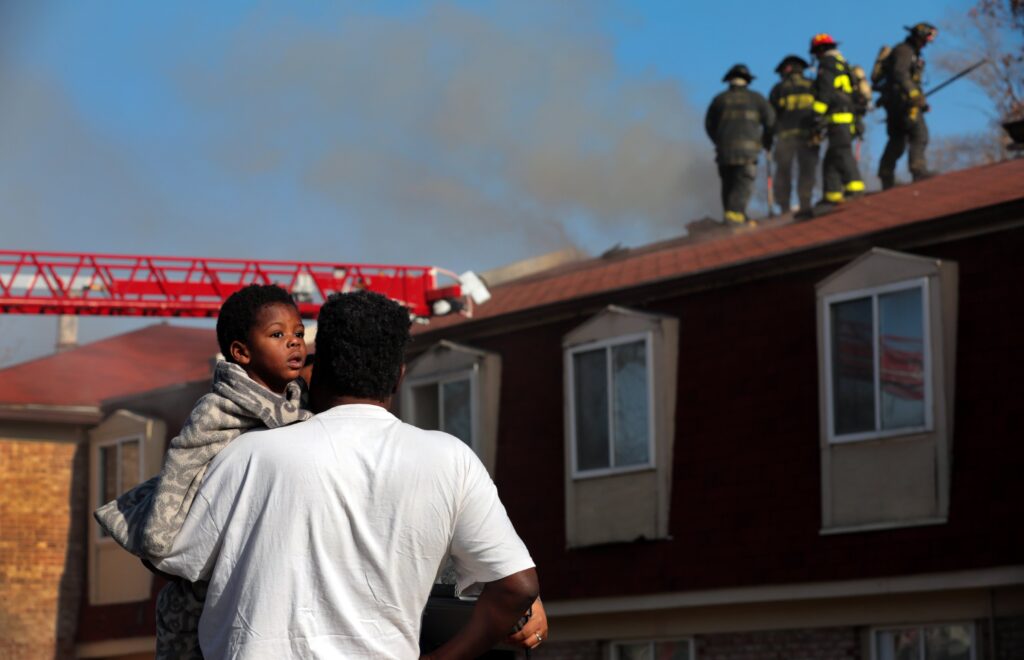 A neighbor caught a 3-year-old girl tossed by her mother from a second-floor window Monday morning as flames spread inside an apartment building in the Wells-Goodfellow neighborhood.

Arnez Merriweather, 30, caught the girl as he stood outside the Hillvale Apartments on Selber Court, at about 9:30 a.m. Monday. Merriweather lives at the complex in a building next to the one on fire.

Black smoke billowing from the eight-unit building was so thick that Merriweather and others couldn’t get into a hallway to enter the complex.

“We (were) yelling at the windows to tell people to get out, and a woman came to the window and tossed the baby,” Merriweather said.

Merriweather calls her a baby, but the girl is actually 3 years old. The girl, Tayliah Williams, and her mother, Latisha Williams, were taken away by ambulance for treatment of minor injuries. An older woman also was taken to a hospital for evaluation.

Five people in all were rescued. The other two residents who were rescued declined treatment, officials said. All were rescued before firefighters arrived. Once the blaze was extinguished, Merriweather spent several minutes at the scene talking with a fire official about what had happened.

St. Louis fire Capt. Garon Mosby lauded the heroic measures taken by the neighbor. Mosby gathered information at the scene and spoke to many witnesses who confirmed what Merriweather said.

“This young man was pretty instrumental in coordinating the rescues of several occupants,” Mosby said. “It’s good in the times we live in, when people are concerned with ‘likes’ and clicks and follows, that someone took action to better the situation.”

The cause of the one-alarm fire is under investigation. It started in a vacant, boarded-up unit, and arson investigators are helping in the probe.

Merriweather sells mattresses for a living. He said he is physically fit, jogging five miles every morning. He grew up playing sports such as basketball. His sister woke him by banging on his door Monday morning to tell him the adjacent building was on fire.

When he looked up and saw the mom dangling the girl from a second-floor window, Merriweather said he screamed up to the mother: “Just drop her.”

“I was calm,” he said. “I caught the baby and handed her off” to someone else.

Merriweather then saw the girl’s mother crawl out the window. She let go. Merriweather and a man with one arm helped support her fall. Then Merriweather and other residents grabbed a ladder from a maintenance crew’s truck and helped bring others out of the building.

Everyone was frantic,” he said.

The aunt of the girl he caught was in another window, yelling for help.

“She was scared,” Merriweather said. “She felt she was going to fall. I had to calm her down. We both came down the ladder.”

Someone handed him a second child, Merriweather said, and he helped bring that child safely down the ladder. “Adults started coming down the ladder,” he added.

The complex is near Goodfellow Boulevard and Natural Bridge Avenue.

Merriweather said he’s proud of what he did. “I always wanted to help people,” he said.