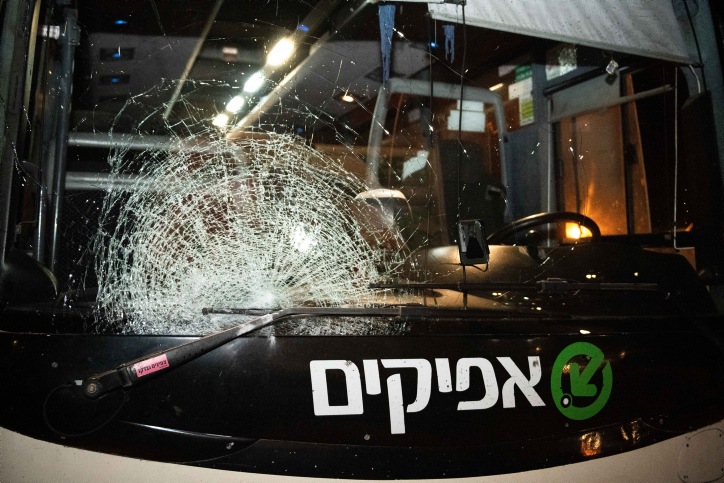 Transportation Minister Merav Michaeli and Public Security Minister Omer Barlev said in a joint statement on Wednesday that the stoning of vehicles is “an act of terrorism, pure and simple, particularly when it is against mass transportation where a single attack could claim many lives.”

The statement came amid a spate of incidents in which rocks were thrown at buses, particularly in the south of the country.

The ministers said they are committed to bringing perpetrators to justice.

“We will not allow this to continue,” Barlev said, adding that over the past two months law enforcement has been increased in the area and was “already showing initial results.”

The efforts were “leading to significant arrests and the quick apprehension of suspects,” he said, though acknowledging that “the true test is how residents of the south and road users’ feeling of security improves. The south is no longer lawless!”

Michaeli said she was briefed by Barlev on the steps being taken in the south of the country to bring “safety and a feeling of safety to the area, particularly the safety and security of road users.”

The statement followed a number of attacks on buses in the area as residents of the south called for better enforcement amid what they claim is a state of widespread lawlessness.

On Tuesday night, a bus driver was attacked with tear gas in the southern town of Lakia near Be’er Sheva after he asked a group of passengers to wear masks.

Speaking to Kan News on Wednesday, the driver said that three Bedouin teenagers got on his bus without masks and refused his requests to don face coverings. Masks are legally required on public transportation.

“I politely asked them to put on masks. They told me okay and sat behind me but still without masks. I asked again. They refused and started cursing me. I stopped the bus on the side of the road, and I told them that I would not continue to drive like that,” he said.

“One started cursing me. I realized he was coming to spray me and then I got off the bus so he would not spray on the passengers. He came out after me and sprayed the tear gas. I pushed him away and he threatened to throw stones, but his friends took him away,” he said.

Police arrived at the scene shortly after and are investigating the incident.

The bus driver was treated by Magen David Adom paramedics. There were no other injuries reported.

Earlier on Tuesday, rocks were thrown at a bus traveling to Eilat in the southern Negev region, smashing a window in the vehicle, in what the bus operator claimed was an attack on a symbol of Israel. The Egged bus company blamed local Bedouin for the attack, saying such incidents were on the rise.