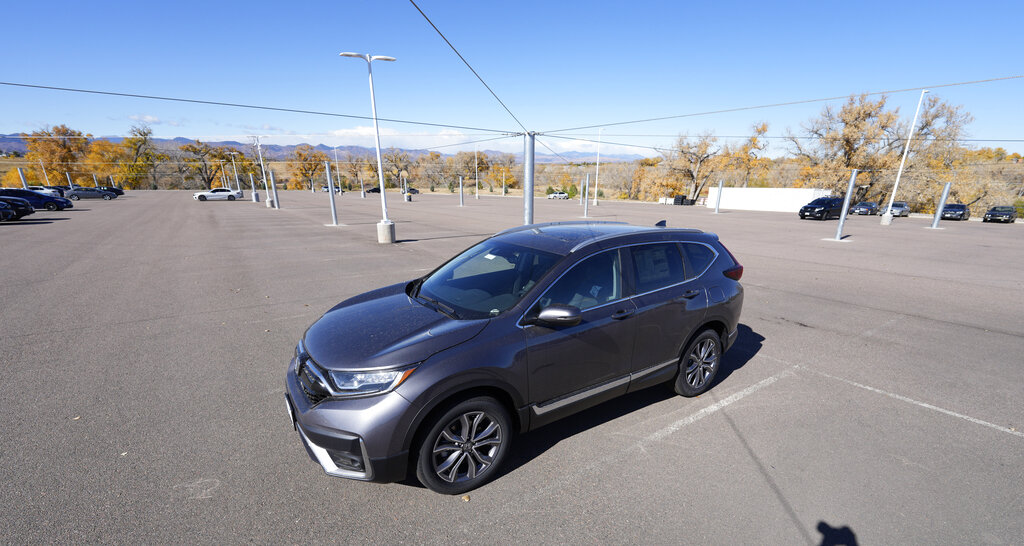 Raimondo will urge Congress to pass $52 billion in funding to boost domestic production of the crucial component and tout the administration’s efforts to ease the supply chain strain, according to remarks prepared for an appearance at the Detroit Economic Club Monday.

The ongoing chip crunch has left dealerships bare, forced car prices up and cost automakers an estimated $210 billion globally in lost production this year — a strain expected to ease over time.

“We’re at an inflection point and we have to make choices,” Raimondo told reporters ahead of the visit. “If we’re serious about restoring American leadership in the global economy, we have to start by rebuilding our semiconductor industry so we can meet the demands of this moment.”

Afterward, she planned to speak at the Detroit Economic Club with Dingell and Detroit Mayor Mike Duggan.

She argued the new $1 trillion infrastructure law will help Michigan’s manufacturing industries and re-shore jobs, but said more is needed to bolster U.S. dominance in the emerging EV market.

The Senate in June passed a bill that would fund $52 billion in domestic chip manufacturing, including a provision spearheaded by Peters that would set aside $2 billion for “mature” chips to be used primarily in autos.

However, the bill has yet to be taken up in the House. Raimondo says passing the funding is crucial to meeting President Joe Biden’s goal of half of all new vehicle sales being electric by 2030, because electric vehicles use more chips than gas- and diesel-powered ones.

“So that’s non-negotiable. Then the question becomes what’s it going to take for us to hit those goals? And I’m telling you now we will not hit those goals if Congress doesn’t quickly [fund] the CHIPS Act.”

In September, the Commerce Department asked automakers, chip companies and others in the semiconductor supply chain to submit data on their inventory, sales and use of chips with the goal of identifying bottlenecks and increasing transparency.

The request was voluntary, but Raimondo had warned that the administration might invoke the Defense Production Act to compel companies to comply if needed. Several companies raised concerns that they would be forced to supply sensitive proprietary information or that the request sets a “worrying” precedent that could be replicated in other countries.

Responses to the request were due in early November, and Raimondo said the quality of the responses will have no impact on which companies would receive funding under the CHIPS Act if it’s passed.

She added that 150 companies from around the world responded to the request, which she said “exceeded my expectations,” but said that she can’t yet comment on the quality of the responses, as her team is still evaluating the data.

“It’s too soon for me to say whether we’ll need to invoke the DPA,” she said. “It’s still an option that we have.”

Raimondo said she recently spoke with allied countries in Asia about collaborating on mapping the chip supply chain. Currently, around 75% of the world’s semiconductor manufacturing capacity is in Asia, with the majority concentrated in Taiwan.

“That sort of mapping and monitoring and managing of the supply chain will be enormously valuable for the auto industry, because it will allow us to predict problems before they become a crisis,” she said. “It will allow us to make our strategic investments in exactly the right places in the supply chain, so that auto companies, frankly, never again have to face what they’re facing now.”