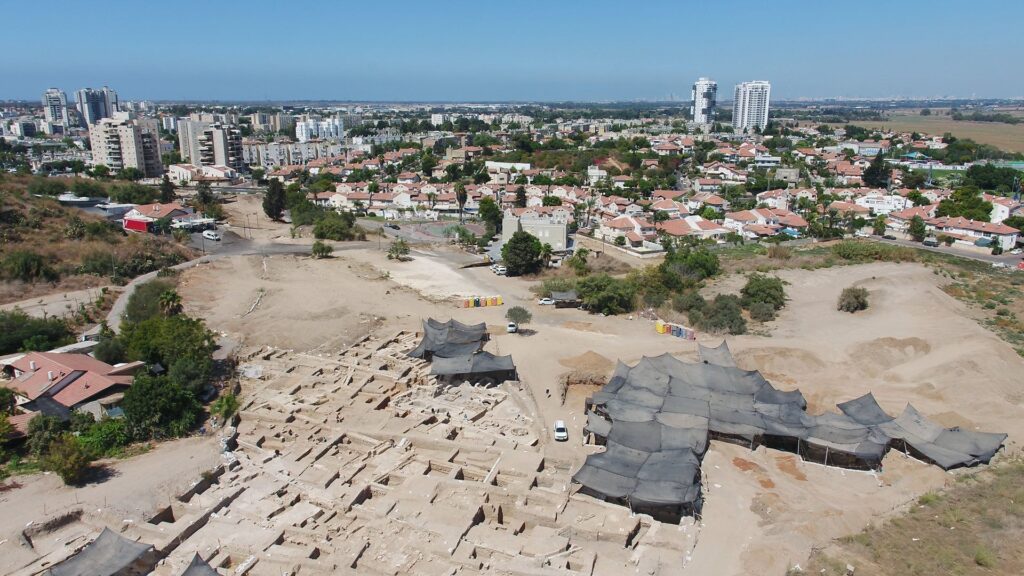 Excavations being carried out on a massive scale in Yavneh have uncovered the first evidence there of a building from the time of the Sanhedrin, which went into exile to Yavneh after the destruction of Yerushalayim by the Romans, some 2,000 years ago.

The building contained fragments of chalkstone vessels, clear evidence that its occupants were observing the halachos of tumah and taharah. The excavation also discovered an impressive cemetery dating from the time of the Sanhedrin.

As in many other instances across Israel, this archaeological discovery was chanced upon during an excavation prompted by development work on the city’s expansion.

The excavation area is located close to a massive Byzantine wine-production center unearthed in recent excavations.

“The discovery of finds from the time of the Sanhedrin is very exciting,” Pablo Betzer and Dr. Daniel Varga, directors of the Yavneh excavation for the Israel Antiquities Authority (IAA), stated. “This is a direct voice from the past, from the period when the Jewish leadership salvaged the remaining fragments from the fall of the Beis HaMikdash, went into exile in Yavneh, and set about re-establishing the Jewish people there.”

The stoneware found at the site are known as “measuring cups,” vessels that retain their taharah and are identified with the Jewish population in the late Bayis Sheini period and second century CE.

At the cemetery, the researchers found dozens of carefully arranged kevarim spaced out at set distances, which probably indicates the existence of a burial society, some official body that was responsible for burial.

Based on the cemetery’s location, it was probably established outside the boundaries of the city, in accordance with halachah. It is too early to say if the interred individuals were Jews or pagans since there are no ethnic symbols on the coffins. However, the historical records and archaeological finds raise the possibility that the kevarim were of the city’s Jewish community.

If this hypothesis is correct, then at least some of the tombs, perhaps the most elaborate, may belong to the sages of Yavneh, contemporaries of Rabban Yochanan ben Zakkai, Rabi Akiva and Rabban Gamliel, the researchers noted.

The excavation uncovered another surprising find – over 150 glass phials placed on top of the tombs. Dr. Yael Gorin-Rosen, head of the IAA’s glass department, explained that the phials were “probably used to keep precious liquids such as fragrant oils. About half of them were locally produced and the other half were imported from Alexandria in Egypt.”

Phials of this type have been recovered in excavations at both Jewish and pagan burial sites from the first to the early third centuries CE.

“It is a mystery why the phials were placed outside the tombs in Yavneh and not inside them, as was usual,” said Gorin-Rosen.

In antiquity, Yavneh was one of the most important towns in the southern coastal plain. During the Chashmonean period, it held a vital role in the struggle between the Maccabean forces and the Seleucid-Greek rule, and the town is mentioned multiple times in the writings of Josephus.

Toward the end of the Bayis Sheini period, Yavneh’s mixed population had a majority of Jewish residents. As detailed in Maseches Gittin, before the destruction of Bayis Sheini, Rabban Yochanan ben Zakkai fled from the besieged city of Yerushalayim and persuaded the Roman emperor Vespasian to allow him to reconstitute the Sanhedrin in Yavneh.

In the intervening years between the Great Revolt in 70 CE and the Bar Kochba Revolt in 130 CE, Yavneh became the most important Jewish spiritual center in the country. It was in Yavneh that Rabban Yochanan ben Zakkai, later followed by Rabban Gamliel, led the Sanhedrin and the Nesius, restored the Torah to Eretz Yisrael and established laws in keeping with the new reality, without the Beis HaMikdash. It can be said that the foundations of Judaism as we know it today were laid in Yavneh.