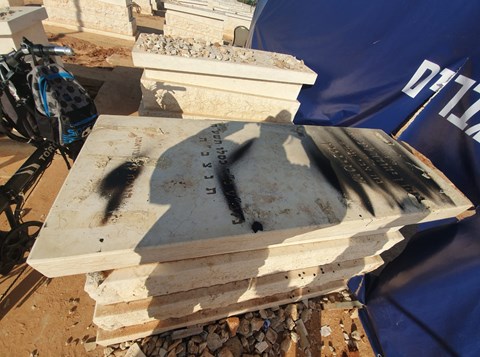 Mispallelim who arrived Friday at the Ponevez cemetery in Bnei Brak were shocked and disgusted to discover that the kever of the late Rosh Yeshivah Hagaon Harav Aharon Yehudah Leib Shteinman, zt”l, was desecrated in a most shocking way by pouring black tar on the matzeivah and the words of his name.

Mayor of Bnei Brak, Rabbi Avraham Rubinstein, said: “Like all of Klal Yisrael, we were horrified to discover the heinous act done with the desecration of the kever of Maran Harav Shteinman, zt”l. A criminal act committed by heartless rioters. At the same time, I will hold talks with police, in order to make sure that they do everything possible to find the preparators as soon as possible and prosecute them. ”

Mayor Rabbi Rubinstein ordered the kever to be cleaned immediately; municipal workers from Bnei Brak used powerful hoses to spray the surface clean soon after the desecration was revealed.

In order to prevent recurring scenes, Mayor Rabbi Rubinstein instructed the municipal to place cameras that would record what happens near the kever to a security company that would monitor what was happening.

Shas party leader Rabbi Aryeh Deri said he was “shocked to the depths of my soul by the criminal and inconceivable desecration” of the gravestone. He called law enforcement to “capture the perpetrators quickly and punish them with the full severity of the law.”