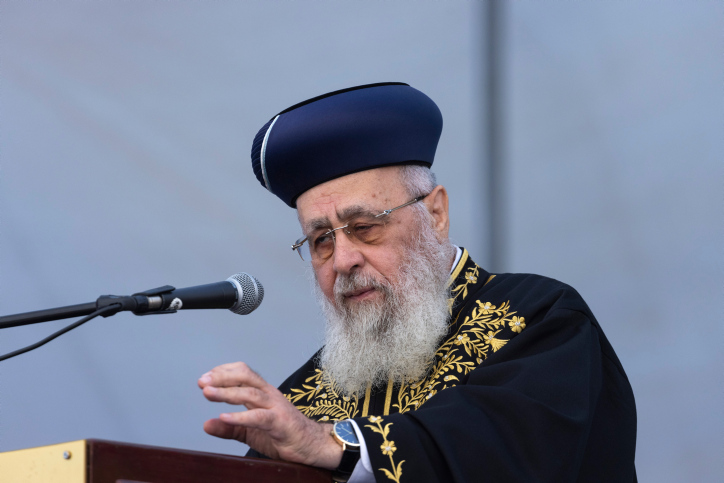 An outrageous decision of the Ombudsman of the Israeli Judiciary, Justice Uri Shoham (ret.), released Thursday has caused an uproar in the chareidi and religious community in Israel and abroad, with the public upset at the bizayon haTorah of the Rishon LeTzion Harav Yitzchak Yosef.

The Ombudsman has said that the Rishon LeTzion Harav Yosef is not allowed to express his opinion on matters that are actually under his authority: conversions and kashrus, which are both now being dealt with in the Knesset.

The Ombudsman also recommended Religious Affairs Minister Matan Kahana to reprimand Harav Yosef for expressing his opinion against religious reforms promoted by the government, and recommends the removal of the Chief Rabbi from his position as Dayan.

Ashkenazic Chief Rabbi Harav David Lau, who also serves as President of the Beit Din Hagadol, flatly rejected the ruling of the Ombudsman to remove Harav Yosef from his post as Dayan, that disregards all the rules of ethics for Dayanim, according to which the statement of the Rishon LeTzion on a halachic issue is not just permitted but also his duty. “This is the role of a Chief Rabbi, to express the position of Halachah and to uphold ‘you shall not fear any man.’

“The Chief Rabbis of Israel together with all the Rabbanim in Israel will continue to be vigilant and will not be influenced by one criticism or another.”

UTJ MK Rabbi Yaakov Litzman said in a statement: “Uri Shoham’s blatant intervention in the conduct of the Rishon LeTzion is outrageous, and expresses the government’s reformist malicious spirit.

“There is not, and will not be, anyone who will prevent the rulings of Halachah, to act according to their commitment and belief, to warn and withstand the onslaught in the face of the severe vulnerabilities and tendencies to destroy the values of mesorah and Halachah.

“Any attempts to intimidate the Gedolei Yisrael, by way of intimidation and threats, must be strongly rejected.”

Shas MK Rabbi Yinon Azulai said in response to the verdict: “Judge Uri Shoham’s decision is a scandalous decision that every Jew should be shocked and hurt by, especially the bizayon of the kavod haTorah. Shoham acts – and not for the first time –  as someone who represents the Reform movement that works tirelessly to shut the mouths of the Torah-true Rabbanim. The Rishon LeTzion Harav Yitzchak Yosef in his words continues the mesorah and daas Torah since time immemorial and will continue to do so without fear. This is the Torah and it will not be replaced.

“I suggest to Judge Shoham to concentrate his energies on dealing with the problems in the judiciary system, and there are many of them to deal with.”