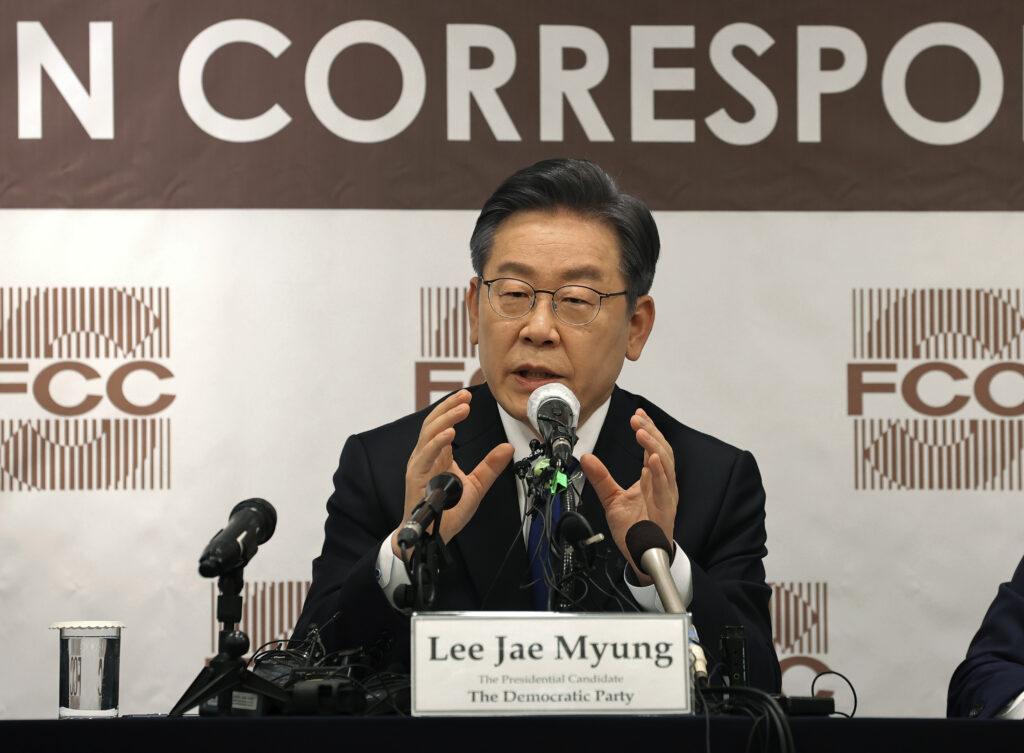 The South Korean governing party’s presidential candidate said Thursday he will continue a conciliatory approach toward North Korea if elected and questioned the effectiveness of U.S.-led economic sanctions in pressuring the North to abandon its nuclear ambitions.

The comments by Lee Jae-myung, who represents President Moon Jae-in’s liberal Democratic Party, come as nuclear negotiations between North Korea and the U.S. remain frozen over the issue of a relaxation of the crippling U.S.-led sanctions in exchange for steps by North Korea to wind down its nuclear weapons program.

Lee has been locked in a tight race in the March election with conservative candidate Yoon Suk Yeol, who has vowed a tougher stance on North Korea and promised to pursue stronger military cooperation with Washington and Tokyo to cope with North Korea’s advancing nuclear threat.

In a meeting with foreign media, Lee stressed that South Korea should take a leading role in dealing with North Korea, reflecting concerns in Seoul that it is increasingly losing its voice in international efforts to resolve the nuclear standoff.

Lee expressed a desire to be an “active mediator” between U.S. President Joe Biden and North Korean leader Kim Jong Un to help them reach a deal based on conditional sanctions relief and “phased, simultaneous actions” by the North to reduce its nuclear weapons and missiles.

“When we ask whether the tough stance (against North Korea) based on sanctions and pressure really produced the results the Western world has aimed for, I can’t say that has been the case 100%,” Lee said.

Moon took a similar stance as he helped set up the first summit between Kim and former President Donald Trump in 2018. At the meeting in Singapore, Trump and Kim vowed to improve relations and issued aspirational goals for a nuclear-free Korean Peninsula without describing when or how it would occur.

But talks derailed after their next meeting collapsed in 2019, when the Americans rejected North Korea’s demand for a major relaxation of sanctions in exchange for a partial surrender of its nuclear capabilities.

Kim has since vowed to bolster his nuclear deterrent in response to what he portrays as U.S. hostility and has ramped up testing of nuclear-capable weapons threatening U.S. allies South Korea and Japan.

His government has also suspended all cooperation with South Korea while expressing anger over the South’s joint military exercises with the United States and its unwillingness to defy the sanctions to restart inter-Korean economic projects.

Kim’s hard line has fueled doubts over whether he will ever fully give away an arsenal he clearly sees as his biggest guarantee of survival. While offering open-ended talks with North Korea, the Biden administration has shown no willingness to ease sanctions unless the North takes concrete steps toward denuclearization.

Lee said it would be crucial for Seoul and Washington to rebuild trust with North Korea for diplomacy to be productive. He also urged North Korea to stick to inter-Korean peace agreements reached in 2018 and expressed regret over the North’s 2020 detonation of an empty inter-Korean liaison office near its border with the South.

“From the viewpoint of the United States, which is far away, the Korean Peninsula issue is just one part of its global military and security strategy. But for the 80 million Koreans living here, it’s a matter of life and death and our entire future,” Lee said.

Lee said he is willing to improve relations with former colonial ruler Japan, which have sunk to post-World War II lows in recent years because of disputes over trade and wartime history.

Japan has expressed anger over South Korean court rulings that ordered Japanese companies to compensate Koreans who were forced into slave labor during the war.

Lee said he would maintain a two-track approach — cooperating with Tokyo on security and economic issues, but responding firmly to matters surrounding history and territorial disputes.

Moon has also been accused of backtracking on his promise to curb the excesses of “chaebol,” South Korea’s family-owned conglomerates, and end their ties with politicians. In August, Moon’s justice minister released billionaire Samsung scion Lee Jae-yong on parole after he spent 18 months in prison for his role in a massive corruption scandal that triggered nationwide protests and led to the ouster of Moon’s conservative predecessor.

Lee Jae-myung, the presidential candidate, promised a sterner approach on white collar crime, but refused to answer when asked whether he too would have freed the Samsung vice chairman if he had been president.