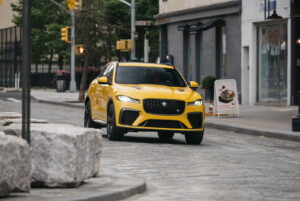 For classic car fans, vintage race events are a rare treat: the chance to see old sports or race cars traveling on a track. There are many in the U.S., including my favorite, the Pittsburgh Vintage Grand Prix, held in July. But they pale in comparison to the Goodwood Revival, a celebration of sports and race cars from 1948 through 1966 held in September at the Goodwood Motor Circuit in Chichester, West Sussex, England.

Where Goodwood differs is its immersive time-travelling atmosphere. The track looks much like it did when it opened in 1948. So do the people, who dress in period-correct attire. Men wear ascots, flat caps and odd jackets. Women bob their hair in a fashion that would do the Andrews sisters proud. Movies, music, activities: it’s all like a step back in time, perfectly accompanying the races themselves, which are blasts from the past.

Having decided to attend this year, I sought an automobile befitting the occasion: the Jaguar F-Pace SVR, the high-performance variant of Jaguar’s most popular vehicle, modified by the company’s Special Vehicle Operations. At first glance, driving something so modern to a vintage event may seem like heresy. A 1962 Jaguar E-Type seems more appropriate. But aside from my friend Jed, who lives in the states, I knew of no one who had an E-Type to lend. But Jaguar would lend me an F-Pace SVR.

So, I arrived in London and got to my hotel only to discover that they had decided to provide a left-hand drive F-Pace SVR, figuring I would be more comfortable driving it. Except I was driving on the left-hand side of the road. It took a few minutes to adjust as I left the resplendent Rosewood Hotel in London, home to some the best Scotch Eggs I’ve ever tasted. I missed the accommodations terribly the following night at my two-star hotel room in Stratford-upon-Avon. But the next night was a significant upgrade: The Four Seasons in Hampshire. Hey, it was close to the track. OK? 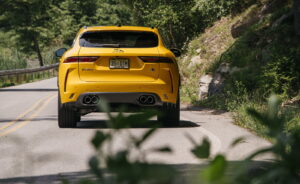 That said, nothing prepares you for English country roads that take you there. Built at the times of King Henry the Eighth, they are barely wide enough to fit two Austin Maestros side-by-side, let alone modern SUVs. And because my driver’s seat is on the left side of the car, every bend in the road is a blind one.

Even if my confidence was unnerved by the thoroughfares, the Jaguar F-Pace SVR compensated nicely.

This compact luxury SUV packs the punch that makes the most of England’s twisting, turning, trying lanes. Credit its potent 5.0-liter double-overhead-cam supercharged V-8 and a ZF eight-speed automatic transmission that sends 550 horsepower and 516 pound-feet of torque to all four wheels, with a bit more funneled to the rear than the front. Reaching 60 mph takes 3.8 seconds; top speed is 178 mph. And Jaguar has carried out incremental tweaks to the steering, brakes, transmission and other components to improve the F-Pace SVR’s already incredible performance. Of course, if you want to monitor how much you’re using, the automaker thoughtfully provides a stopwatch and G-Meter.

Then again, you may not care because the F-Pace SVR is a hoot and a half to drive, even on the wrong side of a road that’s not quite wide enough and not particularly glass smooth. This makes the SVR’s ride compliance welcome, particularly since it doesn’t come at the expense of its impressive athleticism. It adroitly soaks up the rough stuff and resists body roll in corners, all the while maintaining passenger ride comfort. It’s so Jaguar.

So is the cabin — or should I say the throne room?

It’s quite spacious, even the cargo hold, and has been redecorated within the past year. It’s noticeably better in quality, with a redesigned instrument panel, that features a traditional transmission shifter, rotary automatic climate controls and a large 11.4-inch infotainment screen with Jaguar’s new Pivi Pro infotainment software. It’s far better than old InControl Touch Pro system, with the feel of a high-end magazine rather than a clunky computer interface. It’s masterful. Then again, so is the whole car.

The 2022 Jaguar F-Pace SVR proves to be one fast, fine feline, one that proves to be every bit as entertaining as the race event I had driven across England to see. Just like the finest Jaguars ever built, the F-Pace SVR combines a cabin worthy of royalty, blistering speed and agility, and enough cargo space for a week in the country. Or as Jaguar once advertised, “grace, pace and space.”

And as for the one I drove, I licked it, so it’s mine. 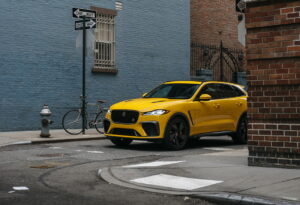