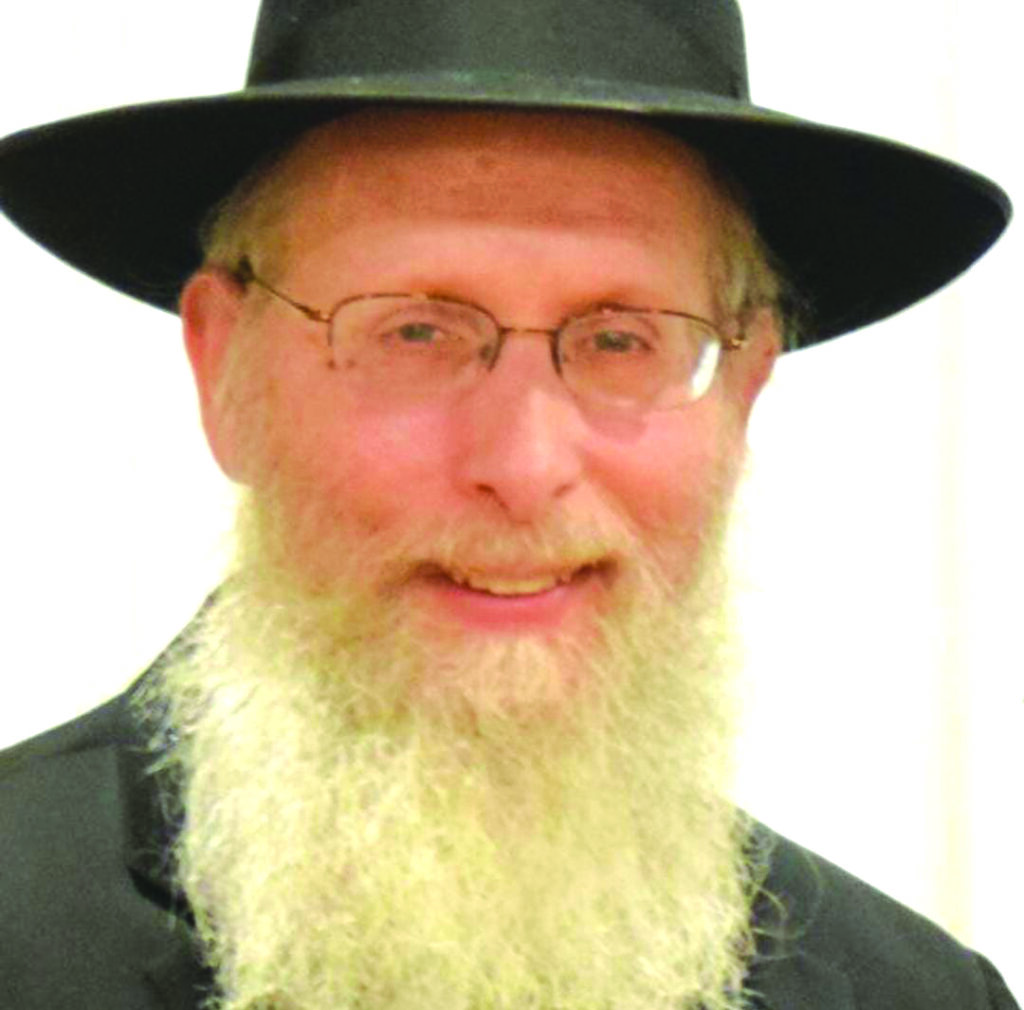 “My father said at orientation this year, ‘I am as excited to teach this year as I was when I began teaching thirty-four years ago.’ I can tell you that in my opinion, he was more excited this year than he was when he began teaching,” his son, Rabbi Meir Moskowitz, said. “I heard him tell people that if you are not growing as a Rebbi, then it has to be your last year. He was constantly improving his teaching and he was always excited to teach his talmidim.”

Rabbi Mordechai Shmuel Moskowitz was born in Elul 5714/September 1954, in New York City, to Reb Eliyahu, a ben Torah who had a butcher shop on the Upper West Side of Manhattan, and his mother, Miriam, who was known for her chessed.

Young Mordechai attended Yeshiva Chofetz Chaim, and after his bar mitzvah, he transferred to Telshe Yeshiva in Cleveland for eight years. He learned in Eretz Yisrael under Harav Dovid Soloveichik, zt”l, for a while, and then returned to America to learn in Beth Medrash Govoha.

Rabbi Moskowitz married Esther Malka née Weisberger — the daughter of Rabbi Zevulun and Chava — who stood at his side and supported all his endeavors. “Eizehu ishah kesherah? Kol ha’osah retzon baalah” is the most appropriate way to describe the manner in which she was devoted to his aspirations, always helping and encouraging him in carrying out his avodas hakodesh.

They moved to Eretz Yisrael, where he once again learned under Rav Dovid Soloveichik, living a life of “pas b’melach tochal” for the next four years.

Upon returning to Lakewood, Rabbi Moskowitz learned in Beth Medrash Govoha for another five and a half years. He then became a Rebbi in Lakewood Cheder, a position in which he served with devotion and pride for over thirty-three years. He began teaching third grade, where he was an important influence in the lives of his talmidim. He was also a popular Rebbi for many years in Camp Agudah and Camp Achim, where he worked tirelessly to build up talmidim in the summer as well.

Rabbi Moskowitz motivated his talmidim to learn and worked on building them up. He was keenly aware of the feelings of his talmidim, and would go out of his way to ensure they never felt offended. Each morning, he would call the name of a talmid who would serve that day as the chazzan for davening. When he announced one morning that “Yehudah” would serve as chazzan, he noticed that two boys, both with the name Yehudah, started rising to take their place as that day’s chazzan. Without missing a beat, Rabbi Moskowitz immediately announced, “today, we will have two chazzanim,” and both Yehudahs took their place in front of the room at the chazzan’s shtender.

Rabbi Moskowitz would give his talmidim a Tehillim as a reward for their effort and work. One morning, when some parents were expected to come into the room, he quietly told a student who was awarded a Tehillim to kindly place his Tehillim in his desk where it would not be in the view of the visiting parents. “Some parents might feel bad that their sons had not yet received a prize, and I do not want to hurt their feelings,” he explained.

Indeed, dozens of talmidim from his more than thirty years of teaching felt he changed their lives and maintained a kesher with him till his final day. Many times, he was up a few hours in the middle of the night thinking how he can reach a particular student.

While he spent countless hours devoted to teaching his tamidim, he was a talmid chacham and masmid who had a tremendous ahavas haTorah, and penned a kuntrus with his chiddushim al haTorah. Even while he was teaching, he had three chavrusos with whom he learned different sedarim.

Despite the challenges he had in life, he always exuded simchah, saying each nisayon a person passes is another palace in Olam Haba. He never expressed any negativism, and was the exemplar in the cheder who set a high standard for others to follow.

While some families spent their Chol HaMoed and Chanukah vacations on outings, Rabbi Moskowitz initiated one of the most successful programs to inculcate these auspicious occasions with an aura of limud haTorah and kedushah.

On each day of these vacation days for nearly three decades, hundreds of boys and their fathers filled the hall of the Bais Faiga wedding hall to spend time learning, hearing a speaker and receiving prizes for their attendance. Securing the sponsorships for this amazing program fell squarely on the shoulders of Rabbi Moskowitz, and he spent many hours lining up sponsors to cover most of the costs of the program. Each child received a prize for attendance, and tickets were distributed for extra prizes, including a Shas for the older division and a bike for the younger division, which were raffled off. With the assistance of Rabbi Tzvi Zev Schwartz and others, the program was a well-run way to start the vacation day with Torah.

“There wasn’t an empty space in Bais Faiga on Chol HaMoed,” his son reports. “Indeed, the rooms were filled to capacity, and they had to set up folding chairs on the stage where the band usually sat during weddings, since the floor was bursting with children learning. Hundreds upon hundreds of children, peaking at over 1,000 boys, came to devote time to learning, and it was a wonderful sight to see. Many bachurim assisted in the logistics, and the program was the highlight of Chol HaMoed and Chanukah for many.”

As the boys arrived for the “Greater Adventures,” Rabbi Moskowitz would greet each boy with his celebrated smile and express his admiration for their attendance. “His greeting was like that which a baal simchah would give to someone who came to his personal simchah,” someone remarked.

Greater Adventures changed the mindset of every boy, and many adults as well, as to how they came to view Chol HaMoed as a day of learning. This revolution quickly spread to shuls throughout Lakewood and other cities in North America.

For the past twenty years, Rabbi Moskowitz undertook another unique project to assist the tzibbur, as he maintained a gemach which lent out Artscroll gemaros for those who wanted them to help their learning. “Recently, when a returning customer came by to borrow a gemara,” said Rabbi Meir, “my mother was told, ‘Your husband was always so gracious when I came by to exchange a gemara for the next volume. He would tell me, “Shas Yid, I cannot wait to attend your siyum hashas.”’ He was always encouraging others to continue their learning as he helped them along the way.”

Rabbi Moskowitz and his wife were encouraged by the Manchester Rosh Yeshivah, Harav Yehudah Zev Segal, zt”l, to spread shemiras halashon, which they did for many years. Early each morning in Kol Shimshon where he davened, Rabbi Moskowitz ran a chaburah which learned the halachos together, and his wife has been teaching it in seminaries and high schools for many years.

In line with this, for many years, Rabbi Moskowitz ran a call-in line on which would have a daily shiur on Hilchos Lashon Hara. Each morning he would change the tapes and make sure the machines were running properly for that day’s call-in shiur.

Another gemach run by the Moskowitz family was one which lent out medical equipment for kimpeturin, to which new mothers could turn to when they needed some appliance for a short time span. All these projects were carried out by Rabbi and Mrs. Moskowitz with the utmost dignity for the recipients and without any fanfare.

Fourteen years ago, on the evening of the fourth day after Succos, Rabbi Moskowitz passed a person on the street, and caught a glimpse of a look of hatred in the eye of that man. Suddenly, he was beaten with a metal bat, and his injuries sent him to the hospital in critical condition.

Tefillos for his recovery were offered by hundreds of Yidden across the globe, and as his recovery progressed, he was eventually moved to Kessler Rehabilitation Center. As he worked on his physical recovery, he once mentioned to a visitor that he hoped the scars on his face would not heal.

“How can you say that?” the visitor asked. “Of course you have to recover, including the appearance of your face.”

“I feel that a person needs a constant reminder of the miracles that Hashem performed,” he said. “It is not enough to have a subtle reminder, but people need a reminder which is clear and constant. If I am left with these scars, I will always feel the gratitude towards Hashem giving me a new lease on life.”

During the COVID pandemic, Rabbi Moskowitz was hospitalized in serious condition. Although his condition deteriorated, it suddenly turned around and he began to recover. When he finally got back to the classroom, he told his talmidim, “The Malach Hamaves wanted to take me away, but I told him I have 25 children, which are my talmidim who are like my children, and they helped stop him from taking me.”

Several weeks ago, Rabbi Moskowitz suffered a serious heart attack, and the doctors in the hospital expressed their amazement that he actually made it to the hospital alive. He was transferred to Columbia University Hospital in New York City, where the doctors struggled to save his life. “Reb Shlomo Ingber of Bikur Cholim of Lakewood took care of all the logistics and saw to it that we did every hishtadlus to bring about a yeshuah,” Rabbi Meir Moskowitz said.

Rabbi Mordechai Shmuel Moskowitz was niftar on 20 Cheshvan, 5782, with kevurah in the Lakewood Bais Olam. He is survived by his wife, Rebbetzin Esther Malka, his brother, Reb Dovid, his sister, Mrs. Goldy Rotberg; his sons, Rabbi Meir and Rabbi Yaakov; and his daughters, Mrs. Yocheved Rottenberg and Mrs. Rivka Falik.

The Moskowitz family was encouraged by one of the local Rabbanim to convey the following message to the community. “People who were mekabel to improve in an area as a zechus for the recovery of Rabbi Moskowitz, z”l, may want to consider continuing it l’ilui neshmas Mordechai Shmuel ben Eliyahu.”

In addition, the family wants to take this opportunity to thank everyone for the outpouring of support you’ve shown them.

Those who wish to share stories or memories about the niftar can email RabbiMoskowitzStories@gmail.com, or mail it to Mrs. Moskowitz at 60 12th St., Lakewood, N.J. 08701.