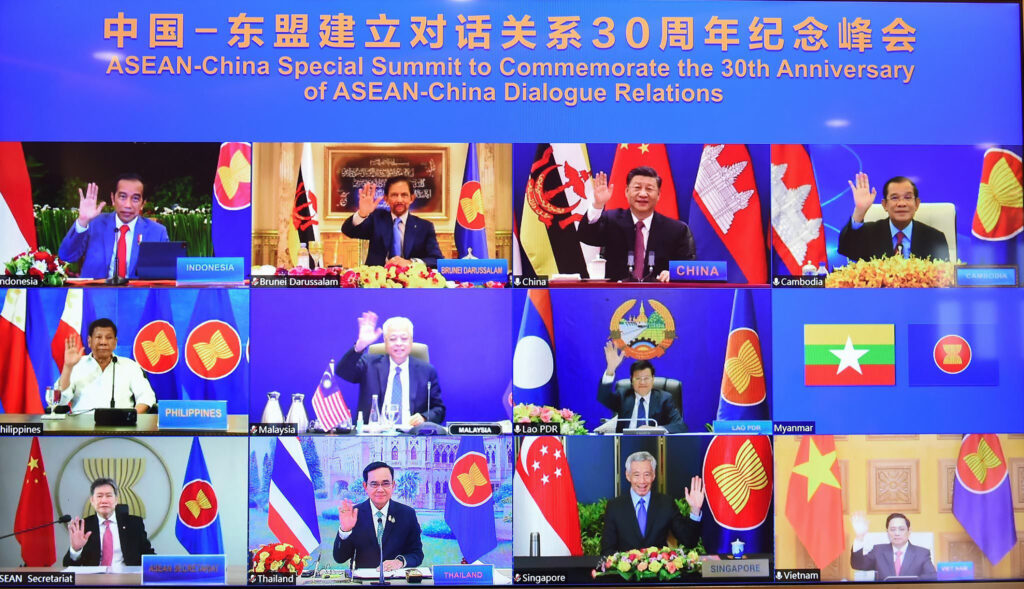 Chinese leader Xi Jinping on Monday said his country will not seek dominance over Southeast Asia or bully its smaller neighbors, amid ongoing friction over the South China Sea.

Xi made the remarks during a virtual conference with the members of the Association of Southeast Asian Nations, or ASEAN, held to mark the 30th anniversary of relations between China and the grouping.

Two diplomats said ASEAN member Myanmar was not represented at Monday’s meeting after its military-installed government refused to allow an ASEAN envoy to meet with ousted leader Aung San Suu Kyi and other arrested politicians. Military ruler Gen. Min Aung Hlaing was also barred from representing his country at the last ASEAN summit.

China has repeatedly sought to overcome concerns about its rising power and influence in the region, particularly its claim to virtually the entire South China Sea that overlaps the claims of ASEAN members Malaysia, Vietnam, Brunei and the Philippines.

“China resolutely opposes hegemonism and power politics, wishes to maintain friendly relations with its neighbors and jointly nurture lasting peace in the region and absolutely will not seek hegemony or even less, bully the small,” Xi said, according to the official Xinhua News Agency.

Xi’s remarks came days after Chinese coast guard ships blocked and sprayed a powerful stream of water at two Philippine boats carrying supplies to troops at a disputed South China Sea shoal and forced them to turn back.

Philippine President Rodrigo Duterte highlighted the incident in his remarks at the conference, referring to the shoal by its Philippine name.

“We abhor the recent event in the Ayungin Shoal and view with grave concern other similar developments. This does not speak well of the relations between our nations and our partnership,” Duterte said, according to a statement from his office.

Duterte also called on China to respect the 1982 United Nations Convention on the Law of the Sea, which establishes maritime entitlements and sovereign rights over maritime zones, along with a 2016 Hague arbitration ruling that mostly invalidated China’s South China Sea claims. China has refused to recognize the ruling.

“We must fully utilize these legal tools to ensure that the South China Sea remains a sea of peace, stability and prosperity,” Duterte said.

On Monday, the Philippines redeployed the two supply boats to provide food to the marines based at Second Thomas Shoal aboard a World War II-era warship which it deliberately ran aground in 1999 in a move to fortify the country’s claim. Chinese vessels have surrounded the shoal and demanded the Philippines tow away the ship, the BRP Sierra Madre.

Malaysian Prime Minister Ismail Sabri Yaakob also raised the sea in his speech at the conference, saying, “As a claimant state, Malaysia firmly views that matters relating to the South China Sea must be resolved peacefully and constructively in accordance with universally recognized principles of international law.”

“Malaysia calls on all countries to remain committed towards maintaining the South China Sea as a sea of peace, stability and trade,” his office quoted him as saying. “To this end, all parties should exercise self-restraint and avoid actions that may be deemed provocative, which could further complicate the situation and escalate tensions in the area.”

China has sought to strengthen its presence in the waterway, home to crucial shipping routes, fish stocks and undersea oil and gas deposits, by building airstrips and other features on islands created by piling sand and concrete atop coral reefs.

China’s powerful navy, coast guard and maritime militia have also sought to block moves by regional countries to exploit resources within their exclusive economic zones, and it strongly objects to operations by the U.S. and other foreign militaries in the area. China and ASEAN have for years been negotiating a code of conduct for handling matters in the South China Sea but those talks have made little progress of late.

China remains a crucial market for Southeast Asian countries as well as a source of investment, and ASEAN has sought to avoid conflict with Beijing. China also has strong ties with ASEAN members Cambodia and Laos and has refrained from criticizing Myanmar, where security forces are estimated to have killed almost 1,200 civilians since overthrowing Suu Kyi’s elected government in February. The government has claimed a lower death toll.

China had wished that all 10 ASEAN members join Monday’s meeting, but Brunei, which currently holds the group’s rotating chairmanship, objected to Myanmar’s presence, according to two diplomats who spoke on condition of anonymity.

In other comments, Xi said peace was the “greatest common interest” of all sides and China would exert its utmost to avoid conflict.

“We must be the constructors and protectors of regional peace, insist on dialogue instead of confrontation, partnership and nonalignment, and join hands in dealing with various negative factors that threaten to undermine peace,” Xi said.

“We must practice true multilateralism and insist on handling international and regional matters through negotiation,” Xi said.