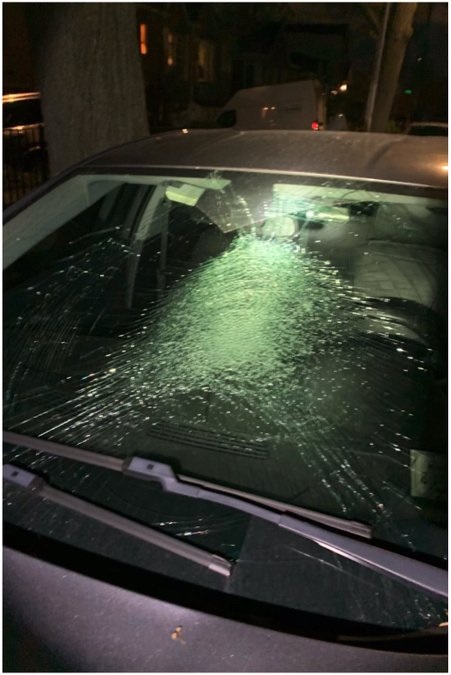 Between 40 and 50 protestors dressed in black assembled Friday night at Crowley Park in Elmhurst (Queens), New York, and then began to vandalize property as rioters tore down American flags, turned over garbage cans, jumped on and spray-painted cars, and blocked traffic, according to a tweet by Robert Holden, a City Councilman.

Five arrests were made on charges including felony riot, weapons possession, criminal mischief and others criminal activity.

The protesters gathered following the acquittal of Kyle Rittenhouse, 18, in Kenosha, Wisconsin. Rittenhouse killed two people and injured another during a protest against police brutality in Wisconsin last year.

New York City Mayor Bill De Blasio led the chorus of Democratic politicians from New York who came out against the verdict when he tweeted, “This verdict is disgusting and it sends a horrible message to this country. Where is the justice in this? We can’t let this go. We need stronger laws to stop violent extremism from within our own nation. Now is the time.”

Mayor elect Eric Adams agreed when he tweeted, “This decision is an indictment of irresponsible laws that make our society far more violent and unsafe under the guise of personal freedom and so-called self-defense. It also sends an extremely dangerous message to those in our country who seek agendas of anarchy – often born in prejudice and ignorance – to wreak havoc in their communities and potentially murder their neighbors. We should not be shocked. We should be focused on swift and righteous action.”

NY Governor Kathy Hochul followed up by by tweeting, “Kyle Rittenhouse used an assault weapon to kill two people. This is not justice. If there was any question about why we need strong gun safety laws, this is your answer. This should never have been allowed to happen in the first place. We have a lot of work to do.”

Congressman Jerold Nadler’s response to the verdict was, “This heartbreaking verdict is a miscarriage of justice and sets a dangerous precedent which justifies federal review by DOJ. Justice cannot tolerate armed persons crossing state lines looking for trouble while people engage in First Amendment-protected protest.”

In response to the various comments by local politicians condemning the verdict, NYC Councilman Robert Holden replied, “The reckless comments of @NYCMayor and many of our elected officials put thousands of families in danger. Our community will not tolerate these senseless crimes, and we thank the police officers in NYPD Queen North for the work they did in defending us.”

Former New Jersey Governor Chris Christie, a former prosecutor, said, “Justice was done in the Rittenhouse verdict. Renews our faith in the jury system. When prosecutors overreach as they did in this case, juries are there to insure justice for the defendant. It is not a perfect system—but still the best one in the world.”

In Chicago, about 1,000 people marched through downtown Saturday afternoon, organized by Black Lives Matter Chicago and other local activist groups. According to The Chicago Tribune, protestors held signs that stated, “STOP WHITE SUPREMACY” and “WE’RE HITTING THE STREETS TO PROTEST THIS RACIST INJUSTICE SYSTEM” with a picture of Rittenhouse carrying a weapon.

Law enforcement in Portland Friday night declared a riot as about 200 demonstrators protested the Rittenhouse acquittal.

The Multnomah County Sheriff’s Office said the protesters were breaking windows, throwing objects at police and talking about burning down a local government building in downtown Portland, KOIN TV reported, but the crowd had dispersed by about 11 p.m. Several people were given citations, the Portland Police Bureau said, but only one person who had an outstanding warrant from another matter was arrested.

Protests have been held in several other U.S. cities nationwide over the verdict, including Los Angeles and Chicago.

Shortly after the Rittenhouse verdict, Portland Police Bureau Chief Chuck Lovell said that officers were working on plans for Friday night and the weekend.

By about 8:50 p.m., about 200 protesters had gathered in downtown Portland and blocked streets. By 9 p.m., windows were broken and doors of city facilities were damaged.

The police tweeted: “A crowd has gathered near SE 2nd Avenue and SE Madison Street and participants have begun breaking windows and damaging doors of city facilities in the area. People are throwing objects at police officers in the area.”

The Multnomah County Sheriff’s Office designated the event a riot, and said in a news release early Saturday morning that some demonstrators had thrown urine, water bottles and batteries at deputies.