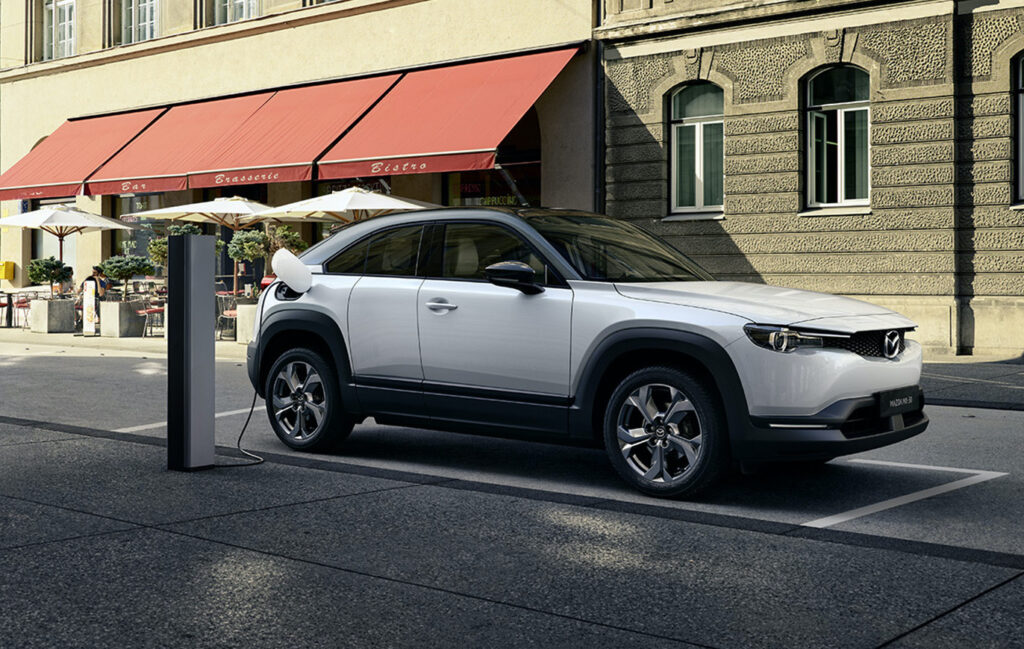 The Mazda MX-30 is the ZOOM! ZOOM! brand’s first electric vehicle and it brings Mazda mojo. It’s stylish, feature-rich and fun to drive.

It’s also a poster child as to why EVs are niche vehicles.

Entering Telegraph Road off Lone Pine, I flung the front-wheel-drive MX-30 through a 90-degree turn and it rotated beautifully. I stomped the right pedal and the front motor responded instantly with a satisfying, electric WHIIRRRRR! — the instant, buttery-smooth torque launching the EV forward.

On a recent test drive, I rotated heads with the MX-30’s nice looks. “Ooooh, I really like the design,” said my friend Laurie, lingering on the sculpted rear taillamps after I rolled into her driveway. But Laurie won’t be giving up her gas-powered Mazda CX-30 anytime soon.

That’s because the MX-30 and the CX-30 share the same platform and — thanks to its gas powertrain — the CX-30 is the better all-around car.

In today’s luxury EV market, most electrics are built on skateboard platforms housing enormous batteries. They are capable, fun and expensive. The average Tesla transaction price is a healthy $55,000. The Silicon Valley automaker’s trillion-dollar brand is built on envelope-pushing, luxury tech like autonomous driving, over-the-air updates and breathtaking acceleration.

Its success has inspired governments to force electric vehicles on everyone — not just the luxe buyers who can afford Teslas. But to make electric cars mainstream, they have to compete at $35K — the average market transaction price (when not roiled by chip-induced supply chain shortages) — not $55K.

That’s where the MX-30 plays, and it is a poor second to its gas-powered sibling.

Laurie is environmentally conscious but couldn’t make sense of the MX-30 compared with her beloved CX-30 (her third Mazda). EV advocates never tire of pointing out that most drivers don’t travel more than 30 miles in a day. So what’s all this fuss about range?

True enough, most of Laurie’s business clients are within the Mazda’s 100-mile radius. But, ahem, anything beyond requires a charge. Even her U. of Michigan alma mater would be dicey — especially in cold Michigan weather. She makes occasional trips east to, say, New York City to visit family — a trip that would take, well, forever in the MX-30. She, like most folks, needs the versatility of gas.

Within its niche electric segment, however, the MX-30 is an intriguing little morsel.

Along with the BMW X1 (heady company), the CX-30 is already the best handling small ute I’ve driven. The MX-30 magnifies its inherent balance with its battery strapped low between the wheels in the vehicle’s belly — eliminating the nose-heavy gas engine. The 35.5 kWh extra battery weight is obvious — the MX-30 weighs 420 pounds more than its gas counterpart — but its placement lowers the center of gravity a whopping 2.1 inches.

With no six-speed transmission to interrupt it, the electric motor felt terrific around town. All torque, all the time.

Shoppers will note that it not only significantly lags the CX-30 in range — but also direct competitors like the 250-plus-mile range Chevy Bolt and Hyundai Kona EV. That’s a problem, as the Chevy and Kona will effortlessly be able to go to, say, Lansing and back on a single charge.

MX-30’s low battery helps Mazda maintain its ZOOM! ZOOM! heritage (Mazda’s new slogan is actually “Feel Alive” — but gimme the ol’ “Zoom! Zoom!”) with nimble handling and a 45% stiffer chassis. But Bolt and Kona are no slouches in the handling department, either.

Mazda, aware of its battery shortcomings, tries to divert attention to its style and affordability.

My $38,550 tester is $2,400 under a comparable Bolt EUV, and a whopping $8,225 less than the Kona EV. And that’s before you spend about two grand on each vehicle to outfit your garage with a 240-volt charger so you can charge overnight (Mazda helpfully kicks in $500 to help buy a charger).

That relative bargain, however, could be erased by Washington’s punishment of foreign automakers. Only American-made, UAW-assembled EVs are currently favored with a $12,500 tax credit in the massive climate legislation, while the small-battery Mazda gets thrown a smaller $7,500 bone. Ouch. Small consolation: the subsidy at least makes the MX-30 price more competitive with the gas-powered CX-30.

While the Bolt and Kona both look at you with blank stares, the Mazda cutie brings cheer. Then it borrows a little luxury from Rolls Royce — cabinet doors that open to the interior. What, no red carpet?

The interior raises the bar over the CX-30’s already handsome office space. The console has lots of basement storage for m’lady’s purse — or to charge a phone. A second, 7.5-inch touchscreen complements the high-dash remote screen with climate controls. The whole console is trimmed with cork (Mazda started as a cork maker, don’t ya know) — aimed at the green crowd.

But as with its battery size, the interior space lags competitors. Rear legroom — 30.1 inches compared to the Bolt’s 36.5 — is cramped for six-footers like me.

Mazda recognizes the MX-30’s niche status and only offers it for sale in California (so eager Michiganians have a long drive back from the dealer), which currently makes up about half of EV sales. There, green is religion and the MX-30 should find an audience of upscale urban buyers whose lifestyle is a perfect fit.

Beyond that, MX-30 has my friend Laurie’s attention that Mazda is in the electric game should it ever offer an EV as practical as its gas lineup. It’s a mountain EV-makers have been trying to climb since Henry Ford’s gas-powered Model T outsold Detroit Electric over 100 years ago.

Lows: $10K premium for one-fourth the range of its gas sibling