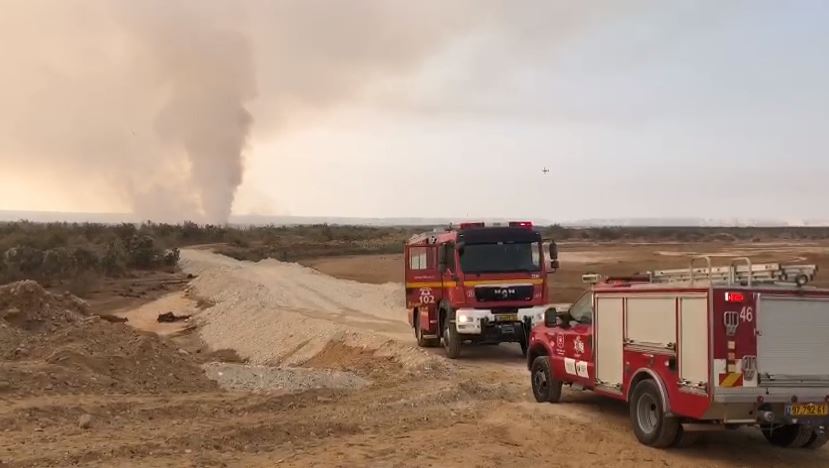 A large fire broke out Thursday on the Jordanian side of the border with Israel, threatening to cross over into Israeli territory and endangering a gas pipeline, Israel Fire and Rescue Services said.

Firefighters were battling the blaze near Ein Tamar, a moshav in the Arava region south of the Dead Sea.

“The fire is very big and is developing on the Jordanian side of the border, with easterly winds moving the blaze toward Israeli territory,” the national fire and rescue organization said in a statement.

Four firefighting aircraft were deployed to aid in the effort.

Jordanian fire services were also fighting the fire in coordination with Israeli authorities, the statement said.

“At this stage, the fire is threatening the local gas pipeline and the firefighting efforts are focusing on halting the fire’s spread,” the service said.

Wildfires sparked across Israel last weekend, fueled by hot, dry and dusty conditions. A sandstorm engulfed parts of the country, with officials warning against outdoor activities for vulnerable populations.

Meanwhile, after an abnormally hot and dry November, Israelis will finally get to enjoy a whiff of winter, with heavy rainfall expected across the country through the coming days.

Starting Thursday, temperatures will begin to fall, with local showers expected mainly along the coastal plain.

On Friday, more serious rainfall will begin along the coast and will get stronger throughout the day. Thunderstorms and hail are also expected.

While Shabbos is expected to be cooler, rainfall will begin to dissipate, with local showers expected on Sunday and Monday, mainly along the coast.

There are fears of flooding in eastern and southern rivers.