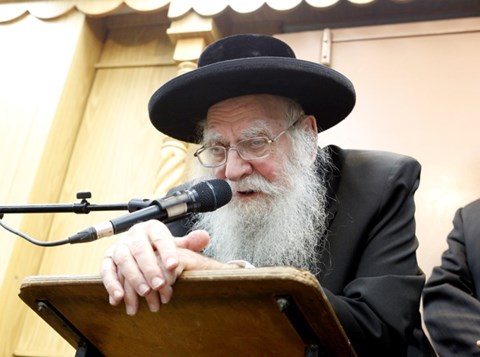 The olam haTorah was thrown into mourning with the petirah on Thursday of Hagaon Harav Shlomo Fischer, zt”l, the Rosh Yeshiva of ITRI in Yerushalayim. He was 90 years old.

Rav Shlomo was orphaned of his father at a young age, and was raised by Harav Yechiel Matityahu Davis, zt”l, as he wrote in the hakdamah to his Sefer Beis Yishai.

Rav Shlomo was the brother of Hagaon Harav Yisrael Yaakov Fischer, zt”l, the Raavad of Yerushalayim and mechaber of Sefer Even Yisrael.

In his youth, he learned in the Mir Yeshiva in Yerushalayim, and was a talmid of Harav Eliezer Yehudah Finkel, zt”l.

Rav Shlomo’s Rebbetzin, Leah, was the daughter of Harav Eliezer David Brand, zt”l, and served as the Menaheles of the Beis Bracha in Yerushalayim and Kiryat Banot. She devoted her entire life to her husband’s learning. She passed away on 2 Tammuz, 5777.

Throughout the week he would learn in Yeshivas Itari in the Beit Tzafa neighborhood, returning home only for Shabbos. Most of the day and night he would learned b’chavrusa with bachurim and talmidim, as well as with people who came especially to learn with him.

For many years he served as a Dayan in the Jerusalem Regional Rabbinical Court while he was a Rosh Yeshiva of Liflagos Reuven. He was a magid shiur in Yeshivas ITRI (Zehav Mordechai) with Harav Mordechai Elefant for many years.

Rav Shlomo was a tremendous baki in Sefer K’tzos Hachoshen and Reb Akiva Eiger, and would say a weekly shiur in these sefarim in his home. He was known to have the entire Torah on his fingertips, and people would avail themselves of his encyclopedic knowledge of even the most obscure ma’amarei Chazal.

He was the mechaber of Beis Yishai, which contains his drashos on the Torah and chiddushim, which he published in 5755/1995. In addition, he was one of the editors of the sefer “Or Hashem” by Rabeinu Chassadai Crescas, as well as the commentaries of the Gr’a on the mazalos, Kabbalah, Toras Kohanim and Safra D’tzni’usa.

The levaya took place on Thursday evening at Yeshivas ITRI and proceeded to Yeshivas Mir, with kevurah on Har Hazeisim.