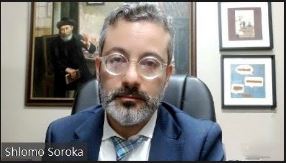 Earlier this week, Rabbi Shlomo Soroka, Agudath Israel of Illinois’ director of government affairs, testified before the Chicago City Council on the city’s redistricting process. He explained that currently the Orthodox Jewish community of West Rogers Park and Peterson Park is primarily concentrated in one ward, but at risk of being split, which would dilute the political voice of the Orthodox community. The Orthodox Jewish community is a “community of interest” that is unfortunately is often overlooked in this process, despite its unique needs.

Soroka spoke to the history of the Orthodox Jewish community in Chicago and explained how an independent educational system is imperative for the survival and growth of Orthodox Jewry. He also explained that with antisemitism on the rise, security is a major concern for Orthodox Jews who are easily identifiable, and therefore more vulnerable. There’s also a general lack of awareness and understanding regarding the Orthodox community. It is therefore of vital importance that their elected representatives understand and appreciate their cultural sensitivities and their need for certain accommodations.

Rabbi Soroka concluded his testimony by asking the body to take the needs of the Orthodox Jewish community into consideration while in this process, saying, “We need representation that understands our history, culture, needs, and values to be effective champions. Carving up the community will dilute our political voice and will harm our ability to continue to grow and thrive.”