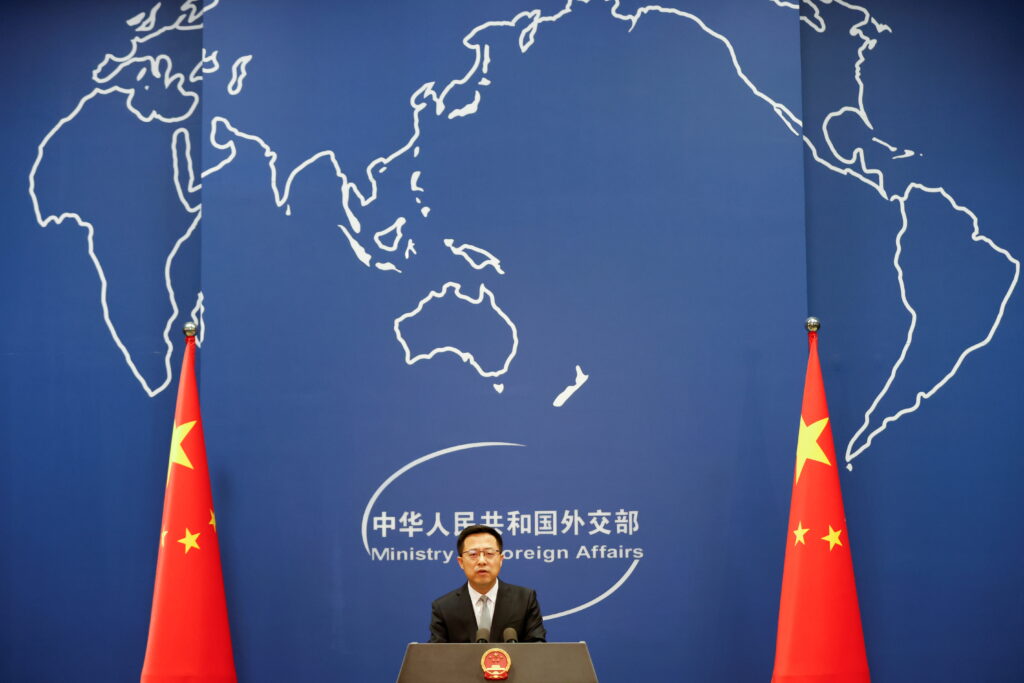 China and the U.S. have agreed to ease restrictions on each other’s journalists amid a slight relaxation of tensions between the two sides.

The agreement represents a degree of progress on an issue that has long aggravated relations, but details remain to be ironed out. COVID-19 travel restrictions and long-standing obstacles faced by foreign media within China are also factors standing in the way of a major breakthrough in media relations.

Under the agreement, the U.S. will issue one-year multiple-entry visas to Chinese journalists and will immediately initiate a process to address “duration of status” issues, China Daily said. China will reciprocate by granting equal treatment to U.S. journalists once the U.S. policies take effect, and both sides will issue media visas for new applicants “based on relevant laws and regulations,” the report said.

Foreign Ministry spokesperson Zhao Lijian gave no information on a timeline for implementation, but called the agreement a “hard-won achievement that is in the interest of both sides and should be cherished.”

“We hope that the U.S. will keep its promise to put the relevant measures and policies in place as soon as possible and work with China to create favorable conditions for both [nations’] media to continue to work and live in each other’s countries,” Zhao said at a daily briefing.

In a statement to The Associated Press late Tuesday, the State Department said China had committed to issuing visas for a group of U.S. reporters “provided they are eligible under all applicable laws and regulations.”

“We will also continue issuing visas to [Chinese] journalists who are otherwise eligible for the visa under U.S. law,” the statement said.

China also committed to increase the length for which U.S. journalist visas are valid from the current 90 days to one year.

“On a reciprocal basis, we are committing to increase validity of U.S. visas issued to PRC journalists to one year as well,” the State Department statement said, referring to the People’s Republic of China.

Not mentioned in either statement were press conditions in the semi-autonomous Chinese territory of Hong Kong, where both local and international media have come under increasing pressure. The Economist said last week that Hong Kong refused a visa renewal for its correspondent Sue-Lin Wong. Authorities have not explained the rejection.

Limits on journalists have fueled tensions between the two countries for more than a year after the U.S. cut 20 visas issued to Chinese state media journalists and required those remaining to register as foreign agents, among other changes.

China responded by expelling journalists working for U.S. outlets and severely restricting conditions for those continuing to work in the country.

The new agreement “was the result of more than a year of difficult negotiations over the treatment of media outlets in both countries,” China Daily said.

“It is hoped that more good news is ahead for the two countries’ media outlets through further China-U.S. cooperation,” the newspaper added.

The State Department said it has “remained in close consultation with the affected outlets, as well as other outlets facing personnel shortages due to PRC government policy decisions, and we are gratified their correspondents will be able to return to the PRC to continue their important work. We welcome this progress but see it simply as initial steps.”

The State Department also said it would continue to work toward expanded access and better conditions for U.S. and foreign media in China, where they face considerable obstacles ranging from questioning by police, harassment preventing them from doing their work, personal threats and lawsuits brought by people they interview.

“We will continue to advocate for media freedom as a reflection of our democratic values,” the State Department told the AP.

Asked about Wong’s case, Hong Kong leader Carrie Lam said the issuing of visas is at the “autonomy and the discretion of any government.” Lam added that the authorities do not comment on individual cases but will continue to facilitate the operation of overseas media based in Hong Kong “in a legitimate manner” according to the city’s mini-constitution, known as the Basic Law.

The city’s Foreign Correspondents’ Club said it was “deeply concerned” over the denial of Wong’s employment visa.

“We again call on the government to provide concrete assurances that applications for employment visas and visa extensions will be handled in a timely manner with clearly stated requirements and procedures, and that the visa process for journalists will not be politicized or weaponized,” the club said in a statement last week.

Wong is the latest in a string of journalists in Hong Kong to be denied visas.

In 2018, Hong Kong authorities refused to renew the work visa of Financial Times senior editor Victor Mallet after he chaired a lunchtime talk at the Foreign Correspondents’ Club with the leader of a now-banned pro-Hong Kong independence party. Authorities did not say why Mallet’s application was rejected.

In 2020, Hong Kong did not renew a work visa for Chris Buckley, a New York Times reporter who had been working in Hong Kong after being expelled from China, as well as for Irish journalist Aaron Mc Nicholas, who was then an incoming editor for the independent media outlet Hong Kong Free Press.