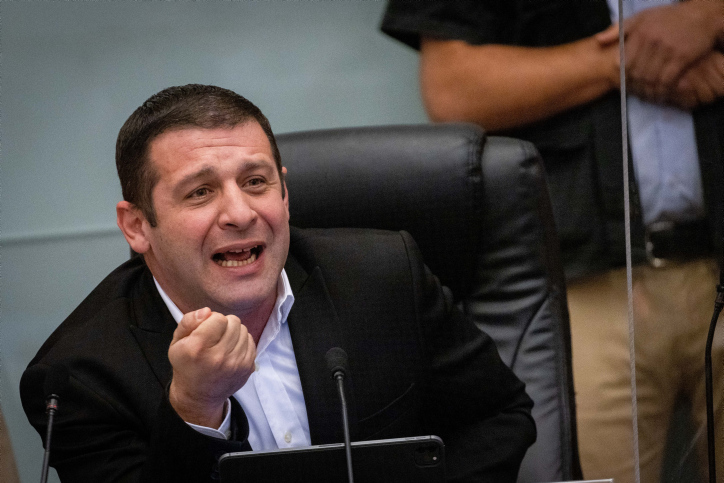 After exposing a series of professional faults in the new tax on disposable dishes, MK Rabbi Yaakov Asher on Monday challenged the chairman of the Finance Committee, MK Alex Kushnir, to “be a man” and act independently in front of his party chairman Avigdor Liberman, who serves as finance minister.

In his opening remarks, MK Rabbi Asher said that “before the arguments about the taxes made while disseminating Fake News, that supposedly 70% of the pollution comes from the disposables while the real figure stands at 7% or even less – I want to give you an introduction to democracy, a disposable or plastic democracy that takes place here in the Knesset so that you may learn something small from the past, in which I will remind you of some of your quotes and attacks.”

He mentioned his days as chairman of the Knesset’s Constitution Committee during the COVID period. “We oversaw the government’s COVID regulations, and because of the emergency situation we confirmed that some of the regulations would take effect in a government decision and the committee discussion would be retrospective. What did you not do to me? You attacked much harder than we are attacking now, you drank my blood with a plastic straw…”

Rabbi Asher then addressed Environmental Protection Minister Tamar Zandberg: “I would like to have been the fly on the wall during the decision on the tax to know from whom the initiative came, from you or from Yvette [Liberman]. I will leave this as a question. I will just note that the order was in coordination with the Environmental Protection Ministry. Yet, there is not a single word there that is your initiative and that means everything.”

He added: “It is clear to anyone who has studied the subject that it is an unprofessional tax. We have shown here the tools that are used many times and are taxed only because you went for the thickness index without any logic. There is the plastic component in cardboard cups that rose only 3%. There is no tax on them. You also did not examine alternate measures that would lead to the reduction of environmental damage without tax. No education and information activities were taken, you did not give preparation time and a long list of failures.

“The average Israeli will not travel to the park or to a picnic either with a dishwasher or with a set of dishes, rather, the Treasury knows that people will buy and pay the tax and thus fill the treasury. That is the goal. Not to lessen the damage to the environment.”

In his remarks, he exposed the government hypocrisy that did not impose a tax on takeaway plastic dishes: “Who are you afraid of? From their strong lobbyists or is your electorate simply using it?

“You think you are saving the world? You are filling the coffers of the Finance Ministry!”

Rabbi Asher further claimed: “If you care about environmental protection, why do not you invest in recycling plants?”

At the end of his speech, he addressed the chairman, MK Alex Kushnir: “I know it is difficult for you, but it is your duty to declare independence and stop this unprofessional process, even though you are in a party whose chairman also happens to be the finance minister. Be a man and do what you have to do.”

On his way out, Rabbi Asher retorted to Kushnir: “It is difficult for you to hear the truth? It will not help you, you have to fulfill your duty and do professional work.”

Rabbi Asher responded immediately: “It’s actually a shame, you might have looked different… It’s hard for you to deal with the professional failures we have presented, you are running away from the truth.”