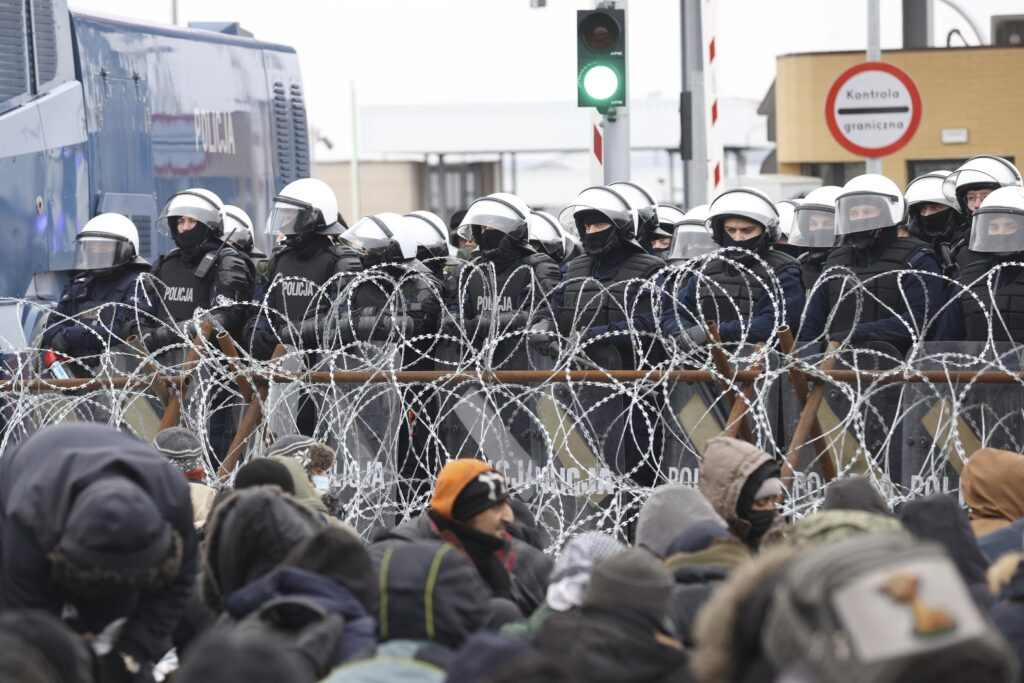 The European Union on Monday ratcheted up the pressure on Belarus by agreeing to slap sanctions on airlines accused of helping Belarus President Alexander Lukashenko wage a “hybrid attack” against the bloc using migrants, as tensions mounted on the Polish and Lithuanian borders.

Up to 4,000 migrants are stuck in makeshift camps in freezing weather after Poland reinforced its border with Belarus with 15,000 soldiers, in addition to border guards and police. At least 11 migrants have died.

Polish authorities said Monday that Belarusian services had led a large group of migrants to a border crossing with Poland and made them believe they would be transported by bus to Germany. Polish police say they are broadcasting messages across the border telling the migrants that “they have been deceived.”

“The Belarusian side is deliberately escalating the situation,” Marcin Przydacz, a deputy foreign minister, said during a discussion organized by the German Marshall Fund of the U.S. “It is also being brought to our attention that Russia’s involvement in this entire hybrid operation is very likely.”

“The situation is unprecedented and unpredictable,” Przydacz said. “For the first time in recent history, an authoritarian regime uses migrants as both shields and bullets.”

Belarus’ borders with Poland, Lithuania and Latvia are also the eastern borders of both the EU and NATO. The EU says Lukashenko’s authoritarian regime has for months invited migrants to Minsk, many of them Iraqis and Syrians, with the promise of helping them across the border.

Meanwhile, Lithuanian officials said they were seeing a rising number of attempts by migrants to cross its border from Belarus, but said the situation at the border was under control.

“They try entering from many other places which previously were not used,” Lithuanian Interior Minister Agne Bilotaite told reporters.

The 27-country EU has already imposed four sets of sanctions on Belarus authorities and senior officials over the disputed election in August last year that returned Lukashenko to office and his government’s brutal crackdown on peaceful protesters that followed.

Opposition leaders and Western nations have described the vote as a sham.

The EU is preparing a fifth lot of sanctions on Belarus. On Monday the bloc’s foreign ministers extended the scope of those measures to add airlines, travel agents and others accused of helping to bring migrants to Minsk, the Belarusian capital.

“Today’s decision reflects the determination by the European Union to stand up to the instrumentalization of migrants for political purposes. We are pushing back on this inhuman and illegal practice,” EU foreign policy chief Josep Borrell said.

EU headquarters said the bloc will now be able to target individuals and entities organizing or contributing to activities by the Lukashenko regime that “facilitate illegal crossing” of the EU’s external borders. A list of those to be hit by the asset freezes and travel bans is expected to be finalized shortly.

The EU believes Lukashenko began luring migrants to Belarus as a retaliatory to destabilize the bloc. The EU has been deeply divided over how to manage migrants since well over 1 million people entered the bloc in 2015.

Also Monday, the United Arab Emirates banned travelers from several Middle Eastern countries from boarding flights to Belarus, cutting off one of the last major air routes for would-be migrants there.

Most airlines with flights to Minsk now say that they won’t allow Iraqis, Syrians or Afghans to travel there so the impact of the EU sanctions on carriers could be very limited.

On Sunday, Polish Prime Minister Mateusz Morawiecki said he and his two Baltic counterparts were discussing whether to call for emergency consultations at the NATO military alliance about the border situation. Lithuanian President Gitanas Nauseda said Monday this would not be ruled out “if the situation becomes even more complicated.”