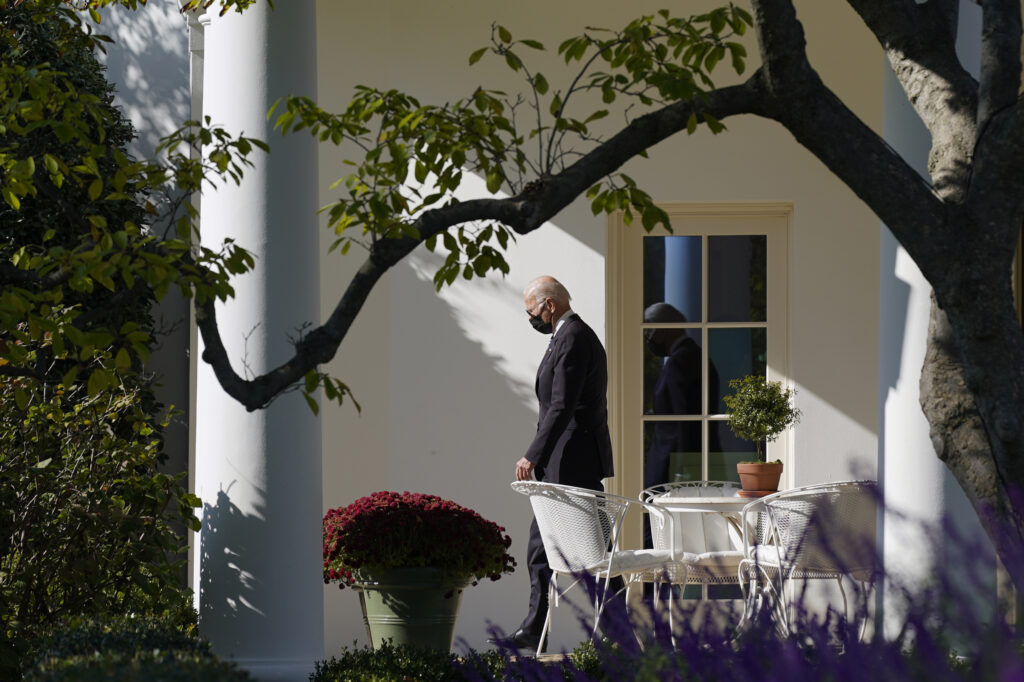 Majorities of Americans support President Joe Biden’s $1.2 trillion bipartisan infrastructure package and a pending bill that would spend nearly $2 trillion on social programs and climate initiatives. Yet despite the backing for these measures, Biden’s approval rating has ticked down to a new low, driven largely by more negative views among Democrats and independents, according to a Washington Post-ABC News poll.

Overall, the survey offers a set of harsh judgments about the president’s performance and the state of the economy. Together, they send a stark warning to Democrats about their prospects in the 2022 midterm contests.

Recent losses in the Virginia elections and a close call in the New Jersey gubernatorial race have put Democrats on edge, with reason. The Post-ABC poll finds that, if elections were held today, 46% of adults overall would back the Republican candidate for Congress and 43% would support the Democratic candidate. Among registered voters, the GOP advantage goes to 51% vs. 41% for Democrats, a historically strong result for Republicans on this measure.

The Post-ABC poll also showcases Americans’ current pessimism: Despite a mix of economic signals – falling unemployment and rising prices – 70% rate the economy negatively, including 38% who say it is in “poor” condition. About half of Americans overall and political independents blame Biden for fast-rising inflation, and more than 6 in 10 Americans say he has not accomplished much after 10 months in office, including 71% of independents.

White House officials have said that they recognize the challenges ahead for Biden and the Democratic Party; however, they’ve said that they are optimistic that conditions in the country, including the economy and the pandemic, will gradually improve next year and that, as general frustrations ease, the president’s standing will rise. At this point, however, Democrats acknowledge that they are at significant risk of losing their narrow majorities in the House and Senate in next November’s elections and that, under current conditions, the losses could be substantial.

Education issues, including the role of parents in schools and the way the United States’ racial history is taught, were credited with helping Gov.-elect Glenn Youngkin, R, defeat Terry McAuliffe,D, in Virginia. Republicans have indicated that they will try to make education and parents’ rights a prominent part of their message and strategy next year.

The poll finds overwhelming support for parents having a say in what their children’s schools teach, including nearly half of adults saying parents should have “a lot” of say on matters of curriculum. The findings broke largely along party lines, with those who say “a lot” supporting Republicans by big margins.

Overall, Americans are divided over which party they trust to handle education, with 44% choosing Democrats and 41% choosing Republicans. That represents a significant weakening in what has historically been an advantage for Democrats on this question.

In a sharply divided country, Biden began his presidency with a slight majority approving of his performance, but his standing has steadily dropped since midsummer. His overall approval rating now stands at 41%, with 53% saying they disapprove. Those who say they strongly disapprove of the way he has handled his job represent 44% of adults. Strong disapproval peaks at 80% among Republicans, though 45% of independents strongly disapprove of Biden’s performance, as do 48% of suburbanites and 44% of White college graduates. Biden’s overall approval rating is down from 50% in June and 44% in September, although his current standing is not statistically different from two months ago.

Biden’s popularity also has slumped among his own base. In June, 94% of Democrats approved of the way he was handling his job compared with 3% who disapproved. Today, 80% of Democrats are positive and 16% are negative. Barely 4 in 10 Democrats strongly approve of Biden today, down from about 7 in 10 who did so in June.

Biden’s approval rating on the economy has also tumbled and now stands at 39% positive and 55% negative. That 16-point net negative rating compares with a September poll in which 45% said they approved of his handling of the economy and an April poll in which 52% approved.

The economic rating of Biden’s performance correlates with a gloomy assessment of the economy itself. Last month produced 531,000 more jobs and brought reports of higher wages. At the same time, inflation hit a 30-year high, and rising prices for food, gasoline and other products appear to be shaping Americans’ perceptions.

The Post-ABC poll also finds that perceptions of Biden’s handling of the coronavirus pandemic, which, early in his administration, was one of his most positive assets, has continued on a downward trend, tracking the effect of the highly contagious delta variant that set back a return to more normal life.

Today, Americans are roughly divided on Biden’s handling of the pandemic (47% approve, while 49% disapprove). Two months ago, 52% approved of his handling of the pandemic compared with 41% who disapproved. In June and in April, he was in positive territory by a 2-to-1 margin. Biden’s current ratings mirror the country’s deep partisan divisions, with similar majorities of Democrats approving and Republicans disapproving, while independents lean negative, 52% to 44%.