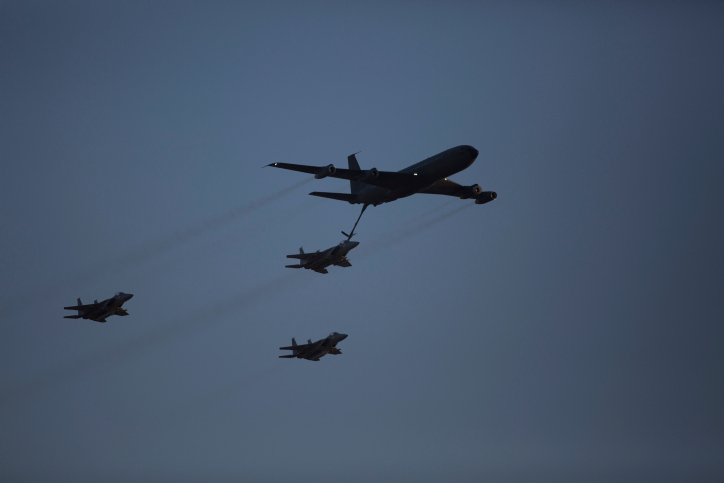 The IAF deployed six F-15 fighters that fired eight guided missiles at Syrian army facilities in the province of Homs, Rear Adm. Vadim Kulit, deputy head of the Russian Center for the Reconciliation of Warring Parties in Syria, told Russia’s Sputnik news on Tuesday, revealing details on Israel’s latest attack in the country.

According to Syria’s SANA News, two soldiers were injured in the strikes that were launched in the Syrian provinces of Tartus and Homs on Monday.

“Six F-15 tactical fighters of the Israeli Air Force, having breached the state border of the Syrian Arab Republic from the side of northern Lebanon, struck with eight guided missiles at logistics support facilities of the Syrian government forces in the province of Homs,” Kulit said.

According to the Syrian Observatory for Human Rights, the attack in Homs was carried out in an area where there is a concentration of military structures and a Syrian army command center. Another target was in the area of the al-Sirat airport, where pro-Iranian forces and the Hezbollah Lebanese terrorist organization are located.

According to the SOHR report, the targets of the attack were weapons depots and weapons development sites used by Iran-backed militias.

In total, seven attacks in Syria in the past month have been attributed to Israel.

The goal of these attacks is to prevent Iran’s military establishment in Syria and to prevent the transfer of advanced weapons from Iran to Hezbollah, an apparently ongoing race between Israel and its rivals.

Israel, fearful of Iran’s attempts to build a military presence in Syria that would open another front on its northern border, has launched thousands of attacks in Syria over the years but has rarely acknowledged them.