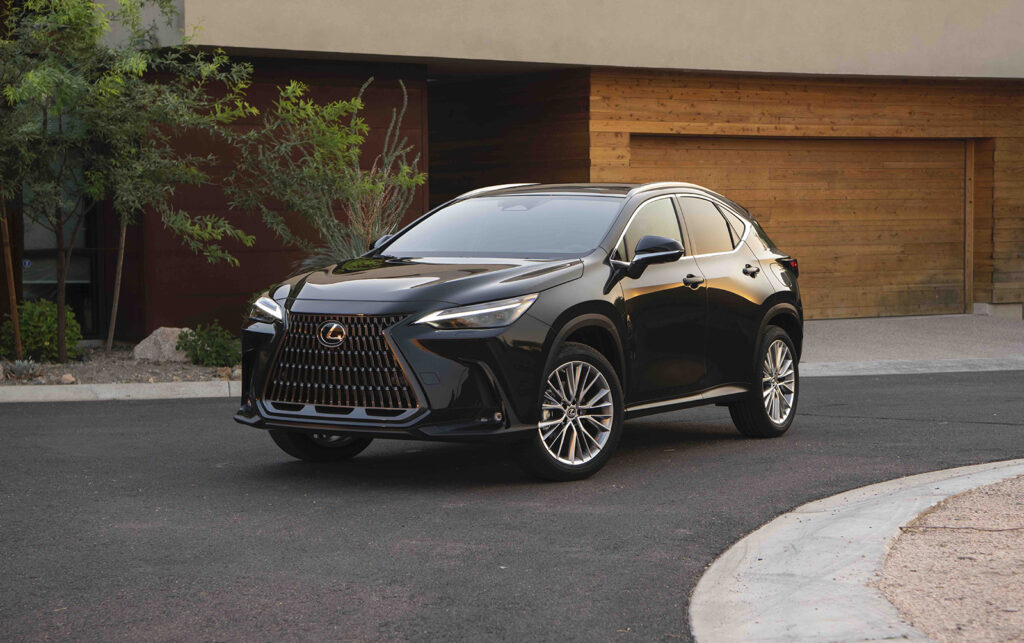 When Lexus first arrived decades ago, it was very much a split personality. Sure, there was the exquisitely engineered Lexus LS 400, a clear attempt at bettering the finest sedans from Germany. But it was sold alongside the ES 250, which was little more than a Camry with unwarranted airs of superiority.

It’s worth remembering when considering the Lexus NX. It first appeared in 2015 as a classic automotive upsell. Essentially, Toyota draped the RAV4 in Lexus couture. But this sleight of hand worked wonderfully. The Lexus NX is now the brand’s second most popular vehicle after the RX, having grown to account for 23 percent of sales. So nearly one in four Lexus vehicles is a compact crossover.

With that kind of popularity, any changes must be made carefully. So even if the redesigned 2022 Lexus NX doesn’t initially seem dramatically different, it most certainly is. Just check out the tailgate. There you’ll see Lexus spelled out in letters in place of the Lexus L logo. Officials at Lexus seem to consider this a big deal, and I suppose it is if you’re a Lexus marketer. But other changes are far more significant, with the most important being found inside.

Until now, Lexus drivers had to contend with a truly dreadful infotainment system controlled by a finicky touchpad and user interface that would be tolerable if you didn’t have to drive while using it. Filled with overwrought and cluttered graphics, it was challenging to use at a glance, to say the least.

Thankfully, Lexus has finally rectified the situation by replacing the Japanese-designed system with one designed in America. The results speak for themselves.

The large infotainment screen is the NX’s most notable improvement. The test vehicle’s optional 14-inches is very large, almost too large. A 9.8-inch screen is standard. But the interface is far easier to use, and the quality of the graphics feels far more suited to its luxury mission. Cloud-based and powered by Google, its refinement is notable. It can now pair two smartphones at once, and wireless Apple CarPlay and Android Auto are standard. So too are Apple Music and Amazon Music streaming. And it can now be paired with a digital key on your smartphone.

But the dichotomy that’s part of Lexus’s DNA is present once you look at the instrument cluster. Dim even on the brightest setting., its cluttered design lacks a clear visual hierarchy, with some essential information poorly placed. A distracting animated graphic constantly shows you which part of the driveline is working, which seems unnecessary. The trip odometer is buried, and easily blocked by the steering wheel. The graphics lack the sophistication of the infotainment system and seem as if they’re made by a different automaker — and to some extent they are. The instrument cluster was designed in Japan — like the former infotainment system.

If this seems like a minor concern, it only stands out because the rest of the vehicle is such a clear advance from the first generation NX.

The NX is equipped with four powertrains, starting with the NX 250’s normally aspirated 2.5-liter four, which it shares with the Toyota RAV4. It generates 203 horsepower thorough its eight-speed automatic to the front wheels, although all-wheel drive is optional. Performance is best described as adequate, with a 0-60 mph time of 8.6 seconds. Step up to the NX 350 and things immediately get more interesting, as 0-60 mph times drop by two seconds, thanks to the turbocharged 2.5-liter four, with 257 horsepower, the eight-speed and all-wheel drive. If this sounds tempting, you’re not alone. Lexus expects it to account for 40 percent of sales.

The rest of the lineup is made up of hybrids.

The turbocharged four, the NX’s most popular powerplant, provides enough punch for the cut and thrust of daily driving. While its more than up to the task at hand, the hybrid powerplants prove superior in punch and fuel efficiency, with the top-of-the-line plug-in hybrid proving sprightly off-the-line thanks to its constant feed of electric power. That extra torque continually enhances the NX’s responsiveness, endowing it with the effortless feel one expects of a luxury vehicle. That said, its spendy starting price may make you think twice before popping for it.

Handling is nicely balanced between ride and handling, with some body lean in corners, but it remains moderate. Bump absorption is fairly good, without the excess ride motions that comes with ride compliance. Steering is very numb, robbing what little sportiness this vehicle might have had. Most Lexus drivers won’t care.

Overall size remains about the same, with only minor increases in length, width and height.

Inside, the cabin’s new look is far better than the old model, particularly up front. The large chunky center console no longer dominates the space. Its design has been pared back, much like the exterior and the results are far more pleasing. But some details, such as the door trim, seem more like afterthoughts than true integrated design.

As before there’s good room for front seat passengers and adequate space in the second row, with legroom dependent on the kindness of those in front. The cabin is blessedly quiet. Cargo room is impressive, and there’s underfloor storage thanks to the lack of a spare tire, as all 2022 NX models wear run-flat tires.

And wait until you try its digital door handles, which eliminates the need to pull a door handle.

For those who think there are no second acts in American life, the 2022 Lexus NX proves that old saying wrong. With an impressive array of drivelines, pared back styling, impressive new infotainment system, and a perfect size in an ever more crowded world, the NX is an automotive Goldilocks: not too hot, not too cold, but just right.