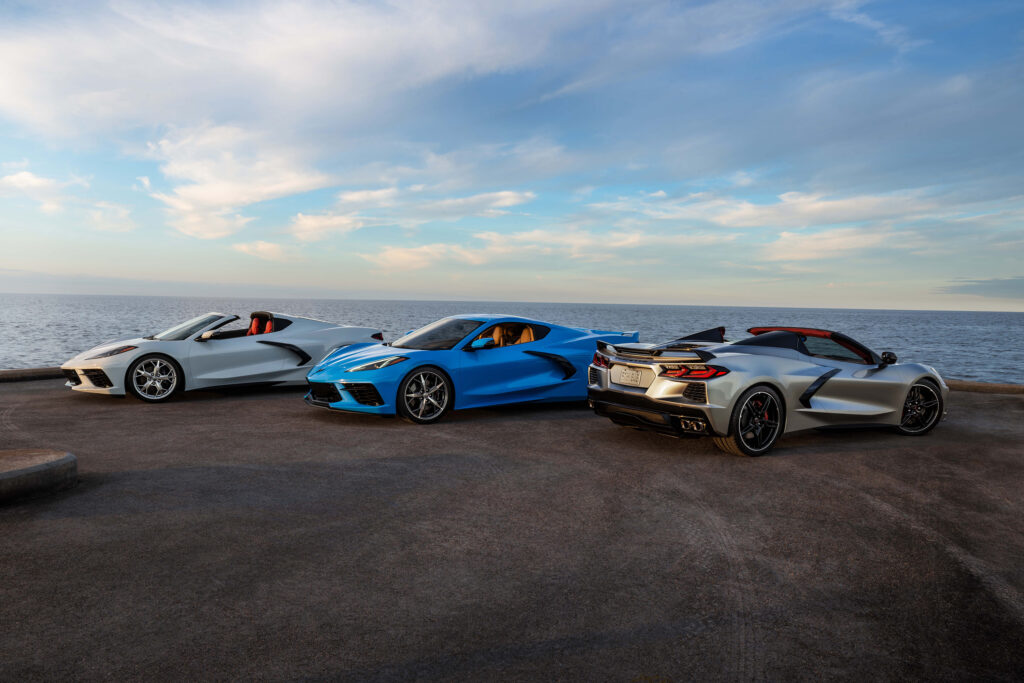 While the motor press has reported ecstatically on the mid-engine C8 Stingray, one Corvette design engineer says it’s not all about engine placement.

“This was not just about moving the engine. This was a ground-up rebuild,” Kirk Bennion said at a Corvette event in Florida. “The biggest benefit, really, is that it moved the occupants 16.5 inches forward. That was a huge change. It gave the car better balance, better weight distribution … and it improved traction and handling.”

Analysts and enthusiasts alike have been amazed at the dynamic design of the C8, now in its second model-year. One humble Corvette technical engineer, Besy Philip, said there’s really “nothing tricky” about it. “We don’t try to cheat the law of physics,” he said. “We try to get it to work for us.”

Best of all, the C8 is still one of the best bang-for-your-buck sports cars in the world, a track star yet graceful and comfortable enough for daily commutes and road trips. Its wide stance is enhanced by a broad, blacked-out grille, large air intakes in front and bulging from the sides, and a broad rear with squared-off quad exhausts.

The hard-top convertible ($7,500 option) was a first for Corvette. Surveys showed a preference for the hard top over fabric. Not only does it look cleaner, Chevy says, it offers better aerodynamics. With a tap of the key fob, it drops down in just 16 seconds even at speeds up to 30 mph.

Another first is the 8-speed dual-clutch automatic transmission, which enables faster and smoother shifts as it delivers power to the rear wheels (where else in a muscle car?). Gears are selected by a push-button shifter (ugh!) or two large steering-wheel-mounted paddle shifters. No manual is available.

Power comes from the same 6.2-liter naturally aspirated engine, meaning immediate throttle response (no turbo lag). It makes 490 horsepower and 470 pound-feet of torque and gets up to speed with great authority: 60 mph comes in an exhilarating 2.8 seconds, and the 100 mph mark in just 7.2 seconds. Before you can blink, the quarter-mile marker zips by in 11.2 seconds at 122 mph. Top speed is listed at 194 mph but the speedometer shows off at 220.

Beyond good looks and speed, the C8 also handles like no Corvette before it. With extra weight over the rear wheels, balance and traction are noticeably improved through twisty roads and corners. Also, kudos for a nicely weighted and precise steering system.

The Magnetic Ride Control (adaptive dampers) adjusts for taut handling on the track but can lighten up for greater ride comfort when you want it. The upgraded suspension now is available as a standalone option ($1,895) so no need to pony up for the Z51 performance package at $5,000.

On the other hand, you’ll miss out on Z51 features like high-performance brakes, suspension, run-flat tires and exhaust, electronic limited slip differential, and a Z51 spoiler.

Drive modes include Sport, Track, Tour, Weather and another to customize settings. Flip into Tour and the C8 relaxes suspension, steering and throttle for breezy commutes and beer runs. Track mode allows the driver to use the Launch Control and record performance numbers and video.

The C8 has some growl with its bite but it’s not a loudmouth. There is a button to enhance the rumble from the squared-off quad exhausts, if you like to announce your arrival. And here’s a tip for the noisemakers on the boulevard: Pull back on both paddle shifters for a quick slip into neutral, then rev it up!

While no one is shopping for fuel economy in Corvettes, an EPA estimate of 27 mpg on the highway isn’t half bad. Figures show 15 mpg around town, however, and a combined figure of 19 mpg.

Inside is a plush, spacious two-seat layout with heavy driver focus. A suede-wrapped steering wheel is squared off at the top for better instrument views, and at the bottom for more lap room. In front of the wheel is a 12-inch reconfigurable gauge cluster that changes color with the drive modes, and there’s a head-up display above.

One design oddity is a 16-inch wall of climate-control buttons separating the driver and passenger. Maybe it was designed by a dad with daughters? It is tedious finding the right button quickly but that will ease up over time.

Materials are first-class across the board: leather, metal trim and suede fabrics even on base trims. Step up to the 3LT for accent-stitched leather and carbon fiber trim. Seven color themes are offered, including a new gray and yellow combo added this year. There even are six colors to choose for the seat belts!

GT2 bucket seats are race-inspired but comfortable for trips, too, and have eight-way power; Competition Sport seats also are available. Even six-foot-plus folks will find enough head and legroom in this cockpit. The center console has two cup holders and wireless phone charger.

Angled toward the driver is an 8-inch, high-definition touchscreen with voice recognition, and it houses Chevy’s Infotainment 3-Plus system. It’s easy to use and responsive, and Wireless Apple CarPlay and Android Auto are standard this year.

In addition to mid-engine power, a Bose audio system is the most powerful out there for a two-door coupe, says Chevy. It comes with 10 speakers but a 14-speaker setup is available with a 10-inch woofer in each door.

So, what to do with your weekender stuff? Cargo space, seldom ample in sports cars, totals 13 cubic feet. That’s space enough in the rear for a set of golf clubs with a front trunk (or frunk) for packages or a duffle. So pack light and launder.

Among safety features, Corvette added a new Buckle to Drive feature, which prevents shifting from park until the driver’s seat belt is connected. Other features include rearview camera/mirror, rear parking sensors, rear cross-traffic alert, and Teen Drive, which allows setting of speed and audio limits for your teen-age son (ha, don’t hold your breath, kid).

What’s all the excitement about? With engine moved between rear axle and occupants, newest generation Corvette takes performance to the next level