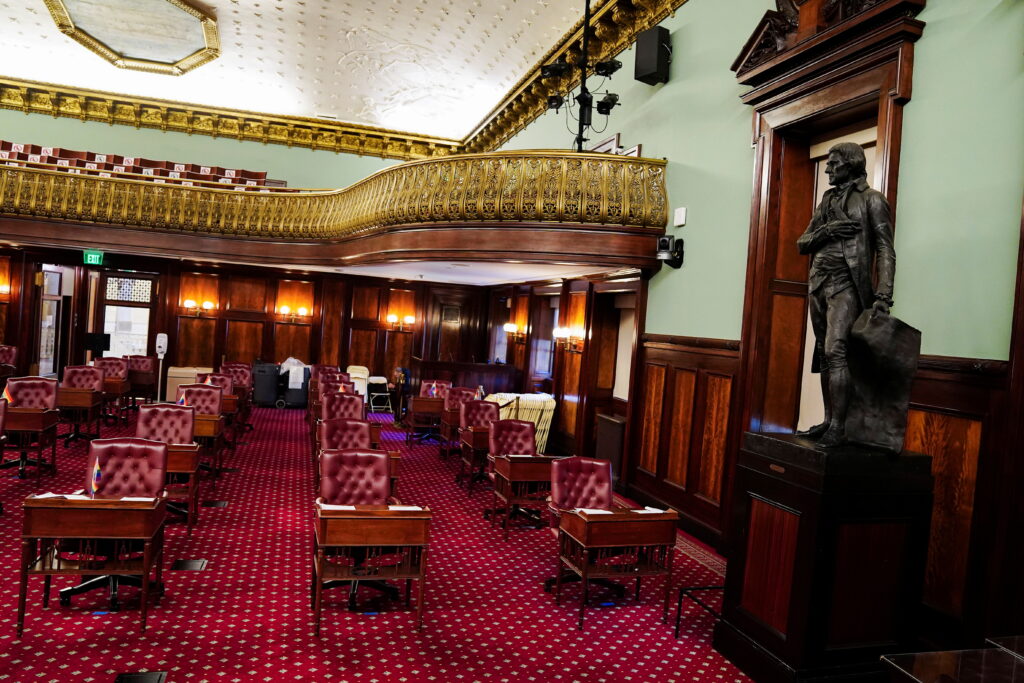 A vote last month by New York City’s Public Design Commission to remove a statue of Thomas Jefferson from the City Council chamber attracted much public attention, as a decision to banish the author of the Declaration of Independence and third president of the U.S. from public view over his slave ownership left many asking who or what would be the next victim of “woke” purity tests.

Amid this debate, over the past few weeks, the move led more than one writer to recall the statue’s little-known Jewish origins, and its donor Uriah Phillips Levy.

Levy, born in 1792, was a member of the Philips family, which occupied a prominent role in early American Jewish history. His maternal grandfather, Jonas Phillips, had served as a shochet for the Shearith Israel community in New York prior the Revolution and, after his loyalty to the patriot cause forced him to flee the city, he became one of the leaders of Philadelphia’s Mikveh Israel congregation.

At a young age, Uriah developed a love for the sea and, at 10, ran away from home to serve on a ship. Legend has it that he informed the captain of the vessel that he must return to his family in Philadelphia in time for his bar mitzvah — which indeed he did.

Levy spent most of his teenage years at sea, serving on merchant ships. Even this stage of his career is marked by stories of pride in his heritage. When captured by a British vessel, an English sergeant attempted to intimidate him into swearing allegiance to the crown. Levy refused, saying, “Sir, I cannot take the oath. I am an American and cannot swear allegiance to your King. And I am a Hebrew and do not swear on your testament, or with my head uncovered.”

During the War of 1812, Levy joined the U.S. Navy, eventually achieving the rank of Commodore, the first Jew to attain that distinction. While his prowess as a man of the sea was unarguable, Levy’s career was marked with many brawls, and at least one duel, with fellow officers who insulted his Judaism. These fights led to several court marshals, but on each occasion, Levy was acquitted and retained his rank. Despite these travails, his history is replete with stories that demonstrate his pride in being a Jew.

In Naval history, he is mostly remembered for his opposition to corporal punishment and was a leading lobbyist for an 1850 congressional bill that outlawed flogging.

Levy also managed to make a small fortune in the New York real estate market and became a generous contributor to many Jewish causes, including the Bnai Jeshurun Educational Institute in New York, and served as president of the Washington Hebrew Congregation (both were still Orthodox establishments at the time).

Above all, Levy’s legacy is intertwined with his admiration for Thomas Jefferson, to whose emphasis on religious liberty, he credited his own ability to rise through the U.S. Navy (something unthinkable for a Jew in almost any other country at the time).

While fellow founding fathers, George Washington and John Adams also wrote forcefully on the topic, it was Jefferson’s 1786 Virginia Statute for Religious Freedom that was the forerunner for the First Amendment and established both tolerance for minority faiths and separation of church and state as core principles of American democracy.

This gratitude led Levy to commission two statues of Jefferson, one of which is now in search of a new home. The other stands in the rotunda of the Capitol.

When Levy learned that Monticello, the unique Virginia home that Jefferson designed and lived in, had fallen into neglect and disrepair, he purchased and refurbished the property, which would be cared for by his family for decades.

It is not only his role in laying the foundation for equality for people of all faiths in America that makes Jefferson’s targeting by New York’s “woke” ironic. Though his anti-federalism would evolve into beliefs that justified secession and states rights-based fights over segregation, Jefferson’s philosophies of individual freedom would lead him to admire the French Revolution’s radicalism. Among the founders, Jefferson is the figure who chiefly deserves to be seen as the intellectual father of American’s liberal tradition.

While Jefferson’s friend turned enemy turned friend again in old age, John Adams was staunchly anti-slavery, it is difficult to imagine the more elitist Adams using a phrase that “all men are created equal.” Despite Jefferson’s slave ownership, it was his egalitarianism that laid the groundwork for emancipation and the civil rights movements.

Much has been written about the folly of erasing or oversimplifying history, but this has largely been portrayed as an educational deficit.

Tearing down Jefferson, literally and figuratively, could present far more danger for Americans who remain loyal to their religious faiths, not in contrast to a majority church, as the founders feared, but to the country’s growing secularism.

Jefferson and his contemporaries enshrined religious liberty as America’s “first freedom.” Since then, it has been fortified by two decades of judicial precedent and by laws.

Yet, laws bereft of a national narrative supporting them only go so far.

One need look no further than Western Europe where several national laws and the EU’s Charter of Fundamental Rights, which explicitly protect religious freedoms, have consistently failed to deliver when faith collides with the zeitgeist.

Based on the secularism of the French Revolution and untethered from any tradition or ethnic narrative, what are commonly referred to as the “values of Europe” are notoriously fungible. At times they are evoked to defend the rights of minorities, at others they are used to justify animal rights trumping protection for religious slaughter methods, or efforts to quash religious schooling that rejects progressive social values.

Jefferson was not without fault as an individual. Yet as Uriah Levy’ actions showed, he came to represent a tradition that views equality and protection for those whose beliefs are markedly different than the majority as a fundamental part of what America stands for.

The oft-quoted phrase tells us that those who do not learn from history are doomed to repeat it. It would seem that those who consciously erase it place their nation’s laws in a vacuum, leaving their guarantees grasping for oxygen.n