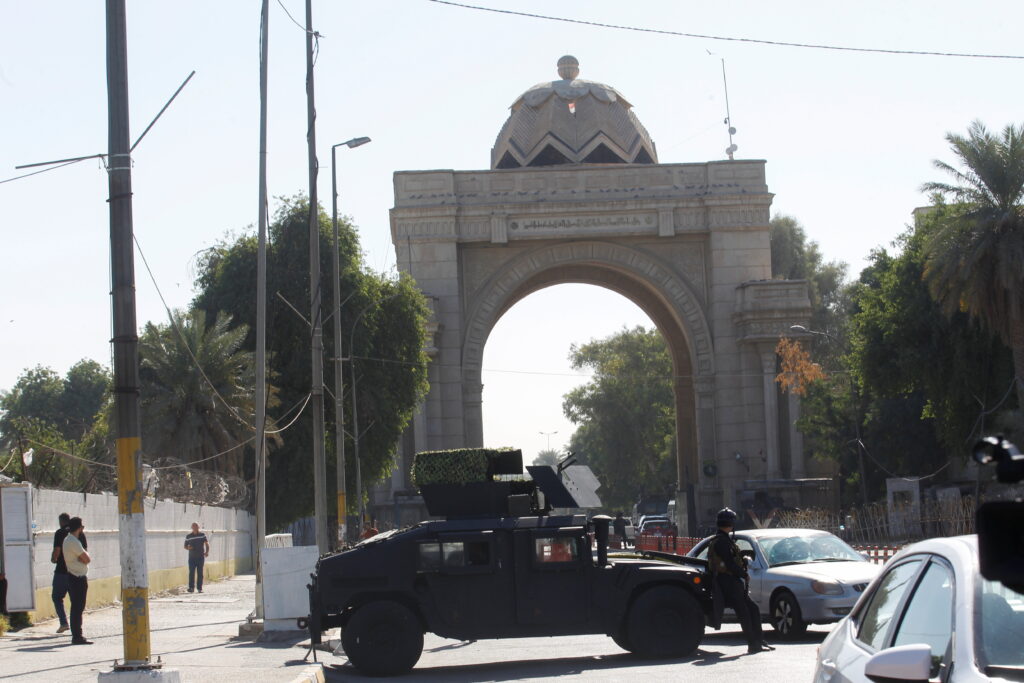 A drone laden with explosives targeted the residence of Iraqi Prime Minister Mustafa al-Kadhimi in Baghdad early on Sunday in what the Iraqi military called an attempted assassination, but said Kadhimi escaped unhurt.

The attack, which security sources said injured several members of Kadhimi’s personal protection detail, came after protests in the Iraqi capital over the result of a general election last month turned violent.

The U.S. State Department condemned the attack and offered assistance with the investigation.

“This apparent act of terrorism, which we strongly condemn, was directed at the heart of the Iraqi state,” spokesman Ned Price said in a statement. “We are in close touch with the Iraqi security forces charged with upholding Iraq’s sovereignty and independence and have offered our assistance as they investigate this attack.”

A spokesman for the commander in chief of the Iraqi armed forces said the security situation was stable inside Baghdad’s fortified Green Zone, which houses government buildings and foreign embassies, after the drone attack.

Images published by the state news agency INA showed damage to some parts of the prime minister’s residence and a damaged SUV vehicle parked in the garage.

Remains of a small explosive-laden drone used in the attack were retrieved by security forces to be investigated, a security official with knowledge of the attack told Reuters.

“It’s premature now to say who carried out the attack,” the security official on condition of anonymity as he was not authorized to comment on security details. “We’re checking our intelligence reports and waiting for initial investigation results to point the finger at perpetrators.”

The groups leading protests and complaints about the result of the Oct. 10 vote are heavily armed Iran-backed militias which lost much of their parliamentary power in the election. They have alleged voting and vote-counting irregularities.

No group immediately claimed responsibility for the attack on Kadhimi’s residence in the Green Zone.

The Iraqi military said in a statement that the attack targeted Kadhimi’s residence and that he was in “good health.” It provided no further detail. Kadhimi’s official Twitter account said the prime minister was safe and called for calm.

Two government officials said Kadhimi’s residence had been hit by at least one explosion and confirmed to Reuters that the prime minister was safe.

Western diplomats based nearby in the Green Zone said they heard explosions and gunfire in the area.

Supporters of Iran-aligned militia groups, which have expanded their power in parliament and government in recent years, have protested the results of the October election.

Demonstrations by their supporters turned violent on Friday when protesters pelted police with stones near the Green Zone, injuring several officers.

The police responded with tear gas and live gunfire, killing at least one demonstrator, according to security and hospital sources in Baghdad.

Independent analysts say the election results were a reflection of anger towards the Iran-backed armed groups, which are widely accused of involvement in the killing of nearly 600 protesters who took the street in separate, anti-government demonstrations in 2019.