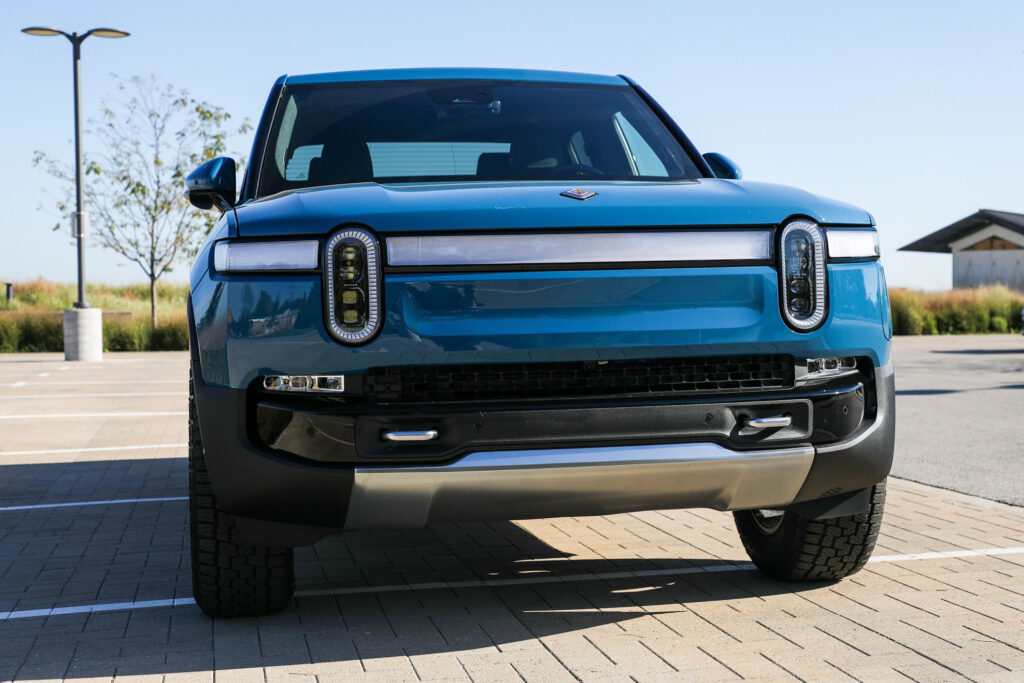 Tesla has delayed its Cybertruck pickup until late 2022. For those who can’t wait, the Rivian R1T is here.

Slip into the driver’s seat of the R1T and you are surrounded by iPad minimalist design. Just like a Tesla. The steering wheel is naked but for two scroll wheels. Just like Tesla. Roll the wheels to set your mirrors. Your steering wheel height. Everything else is in the huge 16-inch touchscreen to your right. Just like the Tesla.

Mash the throttle and — ZOT! — the Rivian takes off like a lit firecracker. Zero-60 mph in just 3 seconds. Just like a Tesla.

It’s been three years since Plymouth-based Rivian wowed the 2018 Los Angeles Auto Show with its spare, revolutionary pickup. Since then, the electric-pickup space has been flooded with innovative intros from Cybertruck to the GMC Hummer EV to the Bollinger B1 and Ford F-150 Lightning.

So it’s hard to remember just how jaw-dropping the R1T was.

“Who are these guys?” asked an impressed Autoblog. R1T (and sister R1S SUV) wowed for the same reason Tesla had with its S3XY lineup of EVs: Rivian was a clean-sheet, electrified re-imagining of the pickup from bumper-to-bumper.

It was the first Generation Tesla pickup — right down to the manufacturer-owned service centers (the first in Michigan is being built in Plymouth) and Mobile Unit visits. That’s right, they’ll come to your house to fix your vehicle.

R1T is a semi-finalist for North American Car, Utility and Truck of the Year, and I had the chance to flog it at NACTOY’s Ann Arbor jury test.

Its simple, Tesla-like approach to the automobile was immediately familiar. I’ve owned two Tesla Model 3s and they are radically different from operating any other vehicle. I shy from dropping my car at a valet stand lest I have to give the attendant an operations tutorial.

But the spare design makes sense from an operational, simplicity-of-manufacturing perspective. Rivian has taken that to heart, and it will be interesting which automakers will follow.

After merging onto Interstate 96 like an Apollo rocket (chest-caving 838 horsepower and 908 pound-feet of torque never get old), I settled into highway driving on adaptive cruise control. Toggle the steering wheel scroll wheel to measure distance to the car in front of you, then click the rocker on either side of the scroll wheel to adjust speed up/down. The left-hand scroll also serves to adjust infotainment volume. Easy-peasy.

Just as Tesla saw skateboard battery design as an opportunity to remake interior/cargo space, so has Rivian gleefully seized on the skateboard to reinvent pickups. Let me count the ways.

Tesla popularized the frunk (front trunk), Rivian expanded it. Behind Rivian’s signature vertical headlights — where a gas engine would normally be — is now a deep storage space with a sub-frunk. It’s not as big as the F-150 Lightning’s frunk — which could house a small family — but that’s a reminder R1T is not a full-size truck.

The Rivian is closer to a midsize Honda Ridgeline in both size, ride quality and unibody construction. But unlike Ridgeline, the unibody chassis is bonded to a battery-boxed skateboard foundation, which gives Rivian more structural rigidity to tow an F-150-like 11,000 pounds (Ridgeline can clean and jerk just 5,000).

Above decks, R1T’s crew cab is roomy. The front footwell is open like a Tesla, with deep console storage between the seats. My 6’5″ frame easily sat behind myself in the rear seat. Probe the rear-seat console and a clever trapdoor gives way like the false wall of a spooky mansion — allowing access to the Gear Tunnel behind the crew cab.

Taking a page from Army Jeeps that ran a transverse tube behind the rear seats (storing ammo, weapons, etc.), the R1T’s Gear Tunnel can hold everything from gym bags to two-by-fours to the portable stove Rivian options.

The Gear Tunnel is capped by folding doors at either end that double as steps to the 4.5-foot rear bed. I tested the 250-pound capacity with my 230-pound frame … it passed the test.

The bed has functional tie-downs, a sub-bed for storage/tire spare, and, dude — this is the cool part — an air compressor built into the chassis. Use the compressor to pump up the spare, bicycle tires, rafts, river tubes, and so on.

My guess is that river/camping trips will be more in the Rivian’s wheelhouse than towing.

With a Tesla-like 314 miles of range — 270 when equipped with 34-inch all-terrain tires like my tester’s Pirelli Scorpions — the battery won’t get far dragging 5,000-10,000 pounds of boat behind it. Our friends at TFL Truck, for example, have seen 70% range degradation on Model X SUVs when towing.

Rivian founder R.J. Scaringe shares many things with Tesla founder Elon Musk — a missionary’s zeal to save the planet with EVs, for example — but he aims to achieve that mission through commercial truck volume (he has a big contract with Amazon) rather than retail sales.

Rivian is in the process of building an exclusive, Level 3 fast-charging network for its customers — Tesla’s 1,100 stations are its secret sauce — with a promised 600 stations coming online by the end of 2023. In the meantime, if you hit the road in an R1T, you’re at the mercy of third-party chargers.

Rivian also promises a network of Level 2 chargers at national parks, but their utility is limited. Neither is Rivian intent on producing R1Ts in Tesla-like (much-less F-150-like) volumes.

Rivian is content to build an exclusive pickup for well-heeled customers — thus the three-year wait since the truck was unveiled in L.A. Thus the production of only a sold-out First Edition model (in production now!) to start. My walkaround of the R1T impressed with tight panel gaps and solid door slams. Rivian seems to be sweating manufacturing details that Tesla sacrificed to volume production.

The $73,000 First Edition (to be followed next year by similar $73,000 Adventure and $67,500 Explorer models) comes with a standard self-charging flashlight in the door to add a premium touch — think Rolls Royce umbrella.