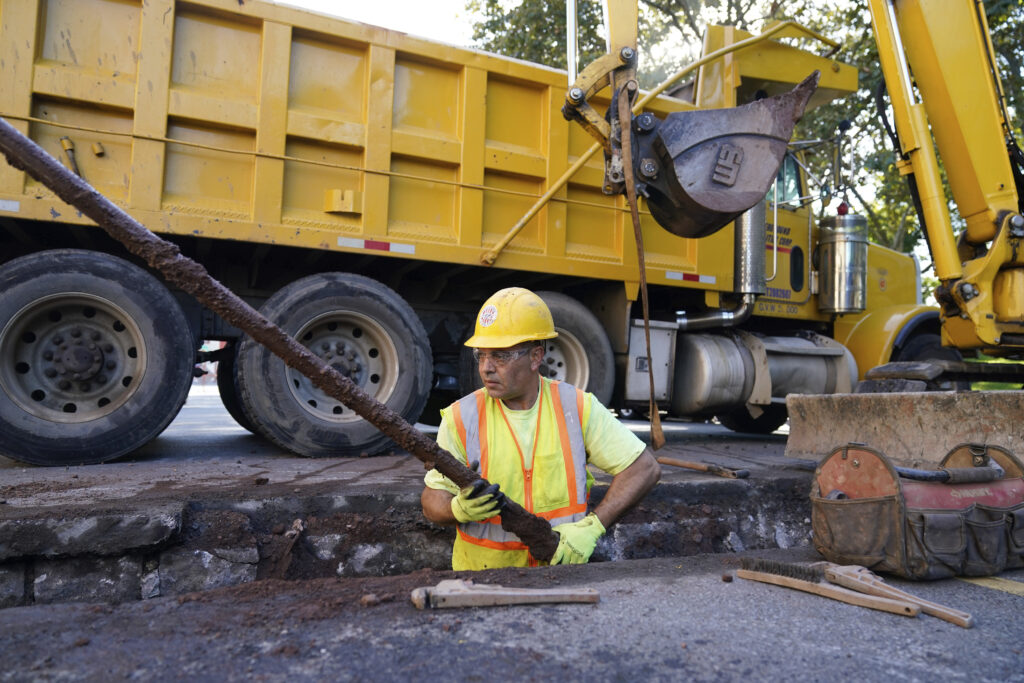 On a recent sun-drenched morning, the staccato rhythms of a jackhammer ricocheted off buildings as a work crew dug into a Newark street to remove an aging pipe that carried water — and potentially a poison — to a small apartment building.

The new pipe is copper. The old one was lined with lead, which can be harmful to human health even at minute levels.

The water service line was one of more than 20,000 made with the toxic metal the city began replacing in 2019 amid public outrage over revelations about high lead levels in the tap water in schools and homes across the city.

Less than three years after the work began, the replacement project, initially projected to take up to 10 years, is nearly complete.

City residents who switched to bottled water during the crisis are breathing — and drinking — easier.

Newark, once castigated and sued over its sluggish response to the problem, is being held up as a potential national model.

The pipe replacement project has been a vindication of sorts for Mayor Ras Baraka, who faced mounting public pressure in 2018 after the National Resources Defense Council, a nonprofit environmental advocacy group, sued, claiming New Jersey’s largest city had failed to adequately monitor lead levels and had downplayed the problem to residents.

Deteriorating lead-lined pipes, some a century old, are a problem in many older U.S. cities, a recent example being Benton Harbor, Michigan. But Newark’s replacement project proceeded faster than expected, thanks to an infusion of state and local funds and an amendment to state law to protect homeowners from having to bear the cost.

“I’ll feel better when we’re completely finished, but I’m excited that we’re at the end of this thing. It’ll be a huge milestone for us,” Baraka said last week.

Newark’s efforts led to the lawsuit being settled last January, and drew praise from the National Resources Defense Council.

“It’s a pretty significant turnaround from the early days when the city was denying they had a lead problem,” Erik Olson, NRDC senior strategic director for health, said. “We are pointing to it as a model for other cities to follow. They’re doing it much faster than other cities have even tried to do.”

The NRDC estimated recently that there are as many as 12 million lead service lines in the U.S. Nearly half of all states don’t even track the number of lead lines within their borders, they found.

Lead in drinking water has been linked to developmental delays in children and can damage the brain, red blood cells and kidneys.

The challenge of removing lead from drinking water in the U.S. came into sharp focus after the Flint, Michigan, scandal in which city leaders switched water sources in 2014 to save money. That led to criminal charges, though many later were dropped, and a $641 million settlement for the residents of the poor, majority Black city.

Several hundred lead lines remain to be replaced in Newark, many connected to buildings that were not accessible earlier in the project.

The process can take up to five hours, though many replacements take less time because they involve smaller pipes that can be pulled out and replaced by making a smaller cut in the curbside, said Mark Wleklik, foreperson for Underground Utilities, a company that has done thousands of pipe replacements in Newark.

More than 70% of Newark residents are renters, and many of the buildings are owned by limited-liability corporations based elsewhere that can be hard to track down, said Kareem Adeem, director of the city’s water and sewer department.

“It’s hard to chase an LLC down to Texas or Missouri or Louisiana or California,” Adeem said. “The renters always want the line to be replaced, but they don’t own the property.”

That led the Newark City Council to pass an ordinance allowing tenants to provide access to buildings. An amendment to a state law paved the way for public money to be used for the replacements — which can cost thousands of dollars per home — and Newark was able to borrow $120 million. All those efforts allowed the city of more than 310,000 people to accelerate its line replacements to as many as 120 per day.

The city also created a program that trained about 75 unemployed and underemployed residents to work on the line replacement crews, Adeem said.